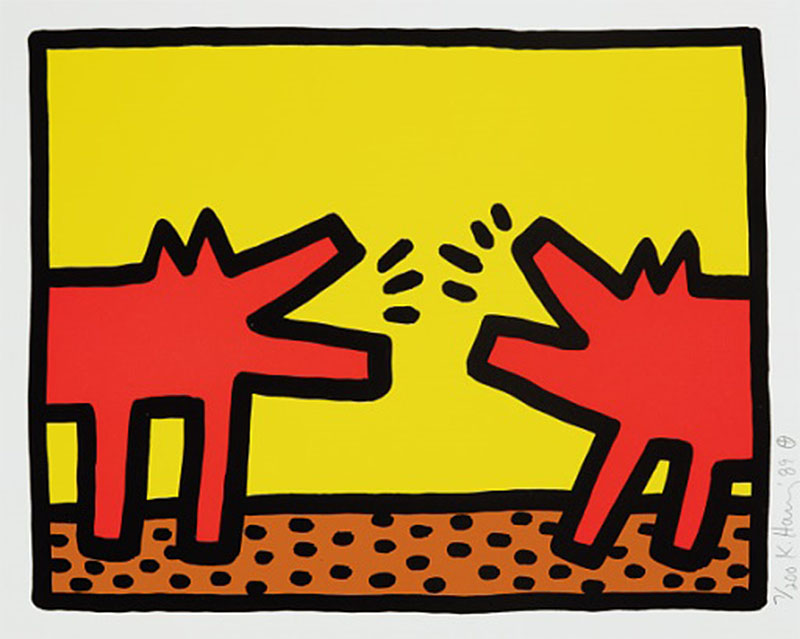 Keith Haring Pop Shop IV (Plate 4), 1989 is a captivating print that features two barking dogs, one of Haring’s signature motifs. Their mouths open wide and release barks implied by the six black action lines in the center of the composition. The red of the dogs contrasts nicely with the bright yellow sky behind them. Barking dogs can be seen in many works throughout Haring’s career, and were sometimes shown with human figures or UFOs. The symmetry of this print in incredibly pleasing to the eye, and yet Haring maintains a human element in its imperfectness. This print is truly a great example of Haring’s artistic vision and a testament to his mastery of line and color.

Haring created multiple Pop Shop portfolios during the span of his career and derived the name from his original Pop Shop that he opened in a retail space in downtown New York in 1986. This shop was opened with the intention of making the artist’s work accessible to the general public, and this accessibility is an explicitly Pop sentiment.

Keith Haring Pop Shop IV (Plate 4), from the Pop Shop IV Portfolio, 1989 is fully documented and referenced in the below catalogue raisonnés and texts (copies will be enclosed as added documentation with the invoices that will accompany the sale of the work).