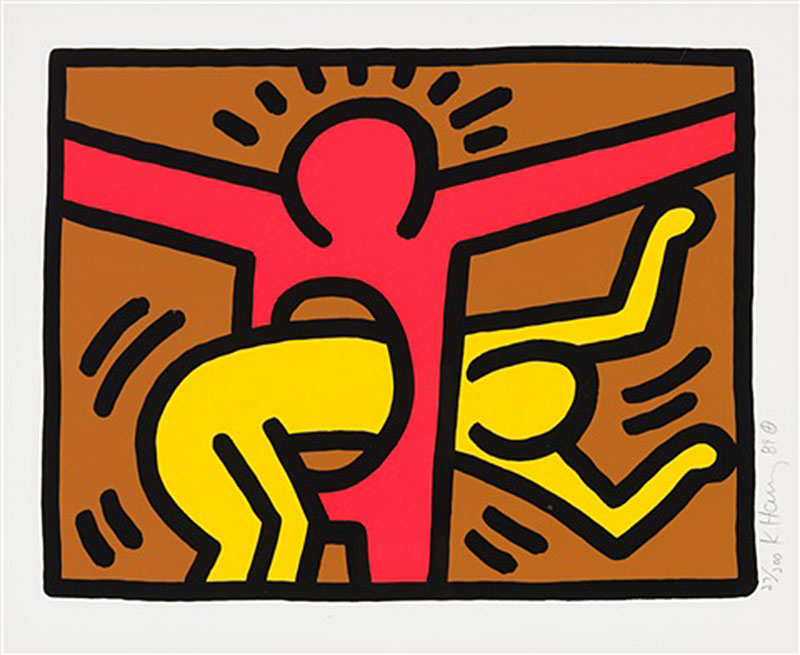 Keith Haring Pop Shop IV (Plate 3), 1989 is one of four silkscreen prints in the artist’s Pop Shop IV portfolio of 1989. In this work, the composition focuses on two of Haring’s signature black line figures over a brown background. The first figure, rendered in red, stands in the center of the work with its arms outstretched and touching the left and right sides of the composition. There is a large circular cavity in the middle of the red figure’s abdomen through which the second figure is bent through. This yellow figure begins with its legs toward the left side of the composition and bends its torso toward the right and loops through the red figure’s stomach and reappears on the right. Its arms stretch over its head toward the right and nearly touch the edge of the work. The overall effect of the design is whimsical and fun, reminding the viewer of imaginative childhood doodles.

Haring created multiple Pop Shop portfolios during the span of his career and derived the name from his original Pop Shop that he opened in a retail space in downtown New York in 1986. This shop was opened with the intention of making the artist’s work accessible to the general public, and this accessibility is an explicitly Pop sentiment.

Keith Haring Pop Shop IV (Plate 3), from the Pop Shop IV Portfolio, 1989 is fully documented and referenced in the below catalogue raisonnés and texts (copies will be enclosed as added documentation with the invoices that will accompany the sale of the work).