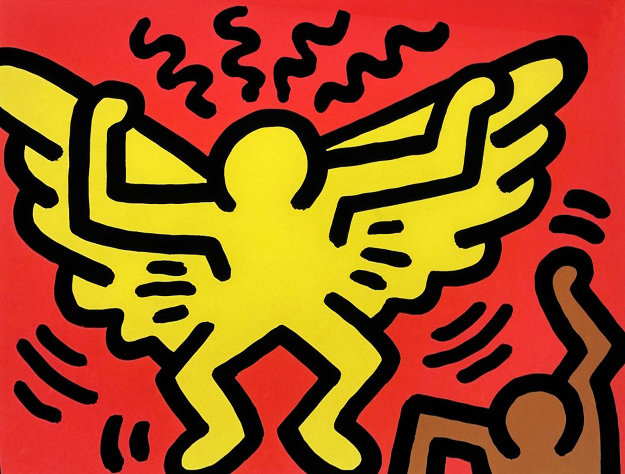 Keith Haring Pop Shop IV (Plate 1), 1989 is the first silkscreen print in the artist’s Pop Shop IV portfolio of 1989. In this work, Haring illustrates two of his signature thick black line figures against a fiery red background. The central figure that draws the eye is the imposing bright yellow angel that threatens to overwhelm the composition. Two massive wings sprout from its back and quiver as they keep the figure in flight. The angel floats above a smaller figure in the bottom right of the print, a human body colored in brown. Angels were common motifs in Haring’s work. The artist used their imagery to express his ideas about religion, creation, birth and sex.

Keith Haring Pop Shop IV (Plate 1), from the Pop Shop IV Portfolio, 1989 is fully documented and referenced in the below catalogue raisonnés and texts (copies will be enclosed as added documentation with the invoices that will accompany the sale of the work).