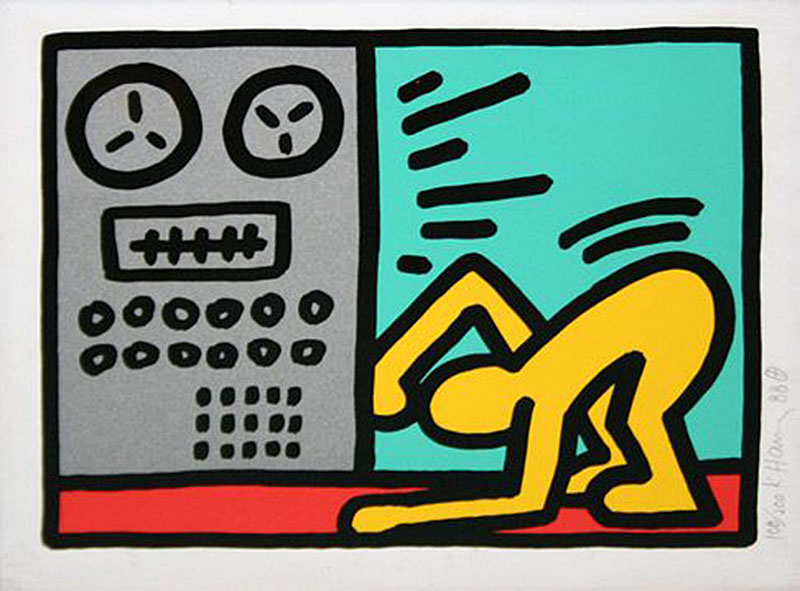 Keith Haring Pop Shop III (Plate 4), 1989 is the fourth and final installment of the artist’s Pop Shop III portfolio of 1989. In this work, Haring illustrates one of his iconic figures in yellow on a red ground in front of a blue background. A mechanical structure that is the same one that appears in the artist’s Pop Shop III (Plate I), 1989 and appears to be making a noise that has captured the interest of the yellow figure in the bottom right corner of the composition. This figure is bent over investigating the object and the noise emanating from it. Haring created multiple Pop Shop portfolios during the span of his career, and derive their names from the Pop Shop that he opened in a retail space in downtown New York in 1986. This shop was opened with the intention of making the artist’s work accessible to the general public, and this accessibility is an explicitly Pop sentiment.

Keith Haring Pop Shop III (Plate 4), from the Pop Shop III Portfolio, 1989 is fully documented and referenced in the below catalogue raisonnés and texts (copies will be enclosed as added documentation with the invoices that will accompany the sale of the work).