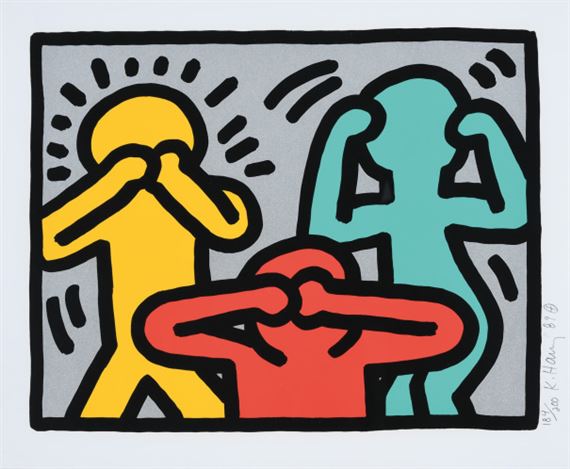 Keith Haring Pop Shop III (Plate 3), 1989 is the third print in his Pop Shop III series. This print features many of the aspects of Haring’s distinct artistic style that the artist is famous for. The composition centers on three human figures, each filled with a different color, yellow, red or teal. These figures collectively embody the famous proverb “see no evil, hear no evil, speak no evil.” Haring was largely interested in humanity throughout his career, often choosing to show intimate and vulnerable aspects of what it means to be human. The artist explored themes of creation, birth, sex, death and violence in his artwork.

Keith Haring Pop Shop III (Plate 3), from the Pop Shop III Portfolio, 1989 is fully documented and referenced in the below catalogue raisonnés and texts (copies will be enclosed as added documentation with the invoices that will accompany the sale of the work).