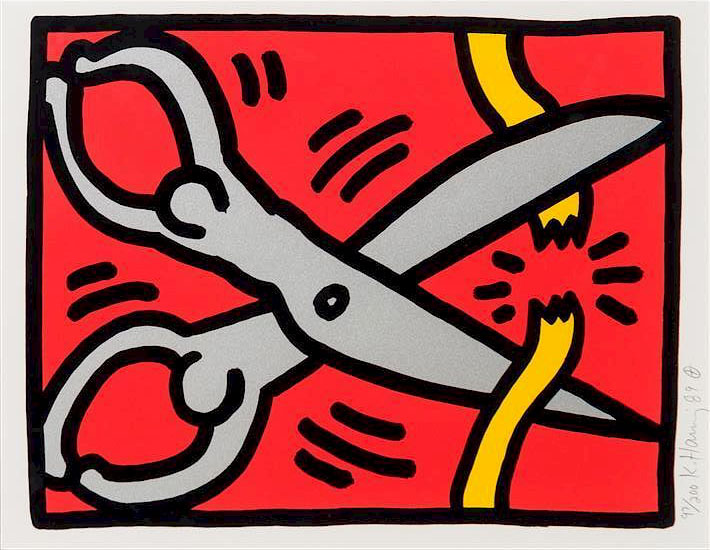 Keith Haring Pop Shop III (Plate 2), 1989 is the second silkscreen print in the artist’s Pop Shop III portfolio of 1989. This work captures Haring’s sense of humor and affinity for whimsical and surreal compositions. In classic Haring style, the artist uses thick black lines to outline a pair of scissors cutting a yellow ribbon. The handles of the tool are formed by human like figures creating the finger holes with their arms held above their head. Haring consistently used human body figures to portray a multitude of ideas, some realistic, others unnatural. Haring created his own simple visual language with these figures. They remain easily understood and processed to anyone’s eye, reminding the viewer of childlike doodles. Haring wanted to make art more accessible to the public and one of the ways he did this was by sticking to his recognizable visual style.

Keith Haring Pop Shop III (Plate 2), from the Pop Shop III Portfolio, 1989 is fully documented and referenced in the below catalogue raisonnés and texts (copies will be enclosed as added documentation with the invoices that will accompany the sale of the work).