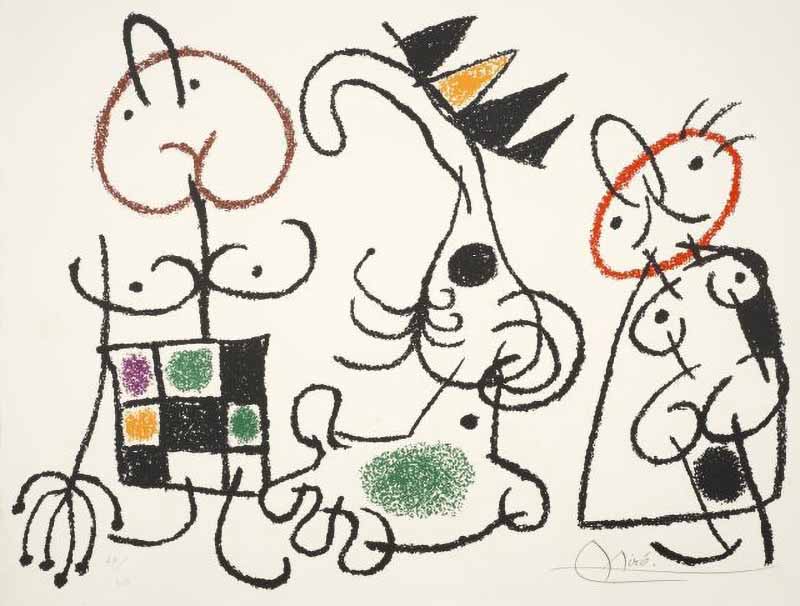 Joan Miró Ubu aux Baleares Pl. 15 (Ubu of the Balearic Islands Pl. 15) 1971 is the fifteenth installment of the artist’s prolific Ubu aux Baleares series. This series contains 23 illustrations of Ubu, a character written by Alfred Jarry, on the Balearic Island in his last years in exile. On the left stands the largest of three figures; it faces the viewer, revealing its rectangular torso and broad chest. To its right, another curious character resembling an elephant lays balancing a crown-like shape on its trunk. It faces the third and final figure on the right side of the work. This figure bears several resemblances to the leftmost character, though is completely rendered in organic shapes. All three figures look upwards toward the sky and are rendered in such a manner that embodies the comedic quality of Jarry’s play. Nicolas and Elena Calas stated of this series, "Miró's Ubu aux Baléares could be taken for graffiti in which face and body are reduced to circular and angular outlines; the limbs to straight or curved lines; eyes indicated by tiny circles and a nose by a narrow triangle. Upon closer scrutiny each print is a deft composition in which the black lines and white space within and between the figures is carefully balanced.”

Catalogue Raisonné & COA:
Joan Miró Ubu aux Baleares Pl. 14 (Ubu of the Balearic Islands Pl. 15) 1971 is fully documented and referenced in the below catalogue raisonnés and texts (copies will be enclosed as added documentation with the invoices that will accompany the sale of the work).

About the Framing:
Framed to museum-grade, conservation standards, Joan Miró Ubu aux Baleares Pl. 14 (Ubu of the Balearic Islands Pl. 15) 1971 is presented in a complementary moulding and finished with silk-wrapped mats and optical grade Plexiglas.