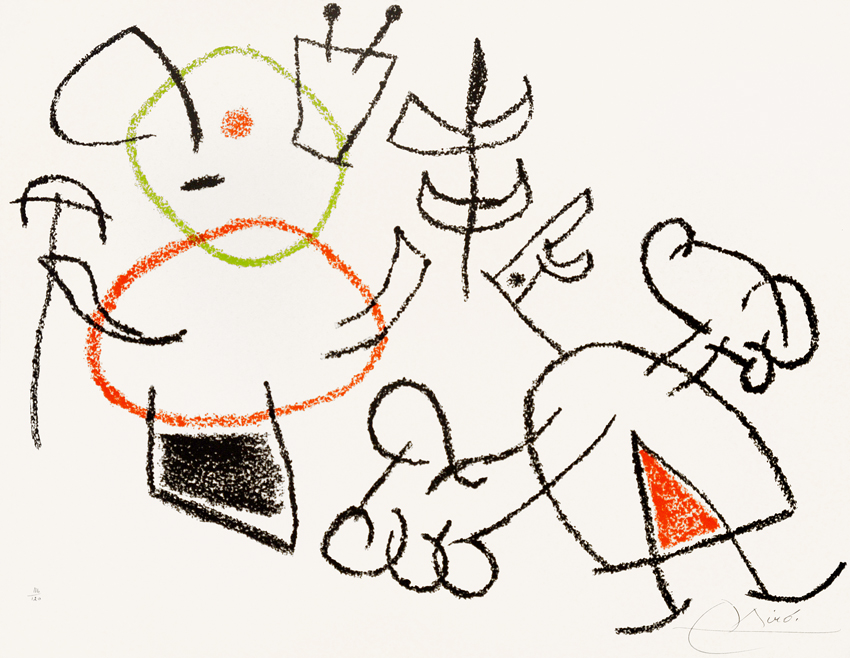 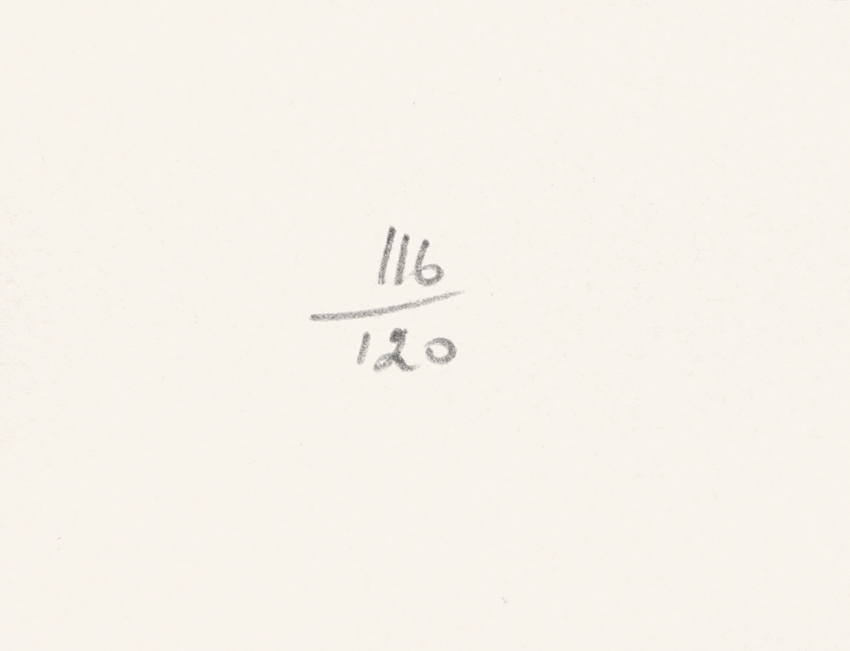 Miró Pl. 14 from Ubu aux Baleares, 1971 is full of symbolism and humor. Ubu aux Baléares is a prolific series that revolves around the character of Ubu on the Balearic Island in his last years in exile. Ubu is a fictional character created by writer Alfred Jarry. In all senses, Ubu represents the antihero, a man who is ugly, vulgar and stupid. Ubu Roi explores this man’s various exploits. His childishness enables the play to be work of satire. Influences for the play derive mainly from Shakespeare and contains a mix of slang, puns and comic relief.

In this illustration from the story, two figures emerge. On the left is a bovine character with a round body and a protruding nose. To its right, another curious character with bulbous hands leans to the left, gesturing as if in conversation. The playful lines accurately convey the comedic quality of the play. Nicolas and Elena Calas stated of this series, "Miró's Ubu aux Baléares could be taken for graffiti in which face and body are reduced to circular and angular outlines; the limbs to straight or curved lines; eyes indicated by tiny circles and a nose by a narrow triangle. Upon closer scrutiny each print is a deft composition in which the black lines and white space within and between the figures is carefully balanced. A seemingly endless variety of grotesque encounters unfold while we slowly turn the pages. Miró draws the comic situation from the banalities of comedy." (Maeght IV 17).

Catalogue Raisonné & COA:
Miró Pl. 14 from Ubu aux Baleares, 1971 is fully documented and referenced in the below catalogue raisonnés and texts (copies will be enclosed as added documentation with the invoices that will accompany the sale of the work).

ABOUT THE FRAMING:
Miró Pl. 14 from Ubu aux Baleares, 1971 is framed to museum-grade, conservation standards, presented in a complimentary moulding and finished with silk-wrapped mats and optical grade Plexiglas.