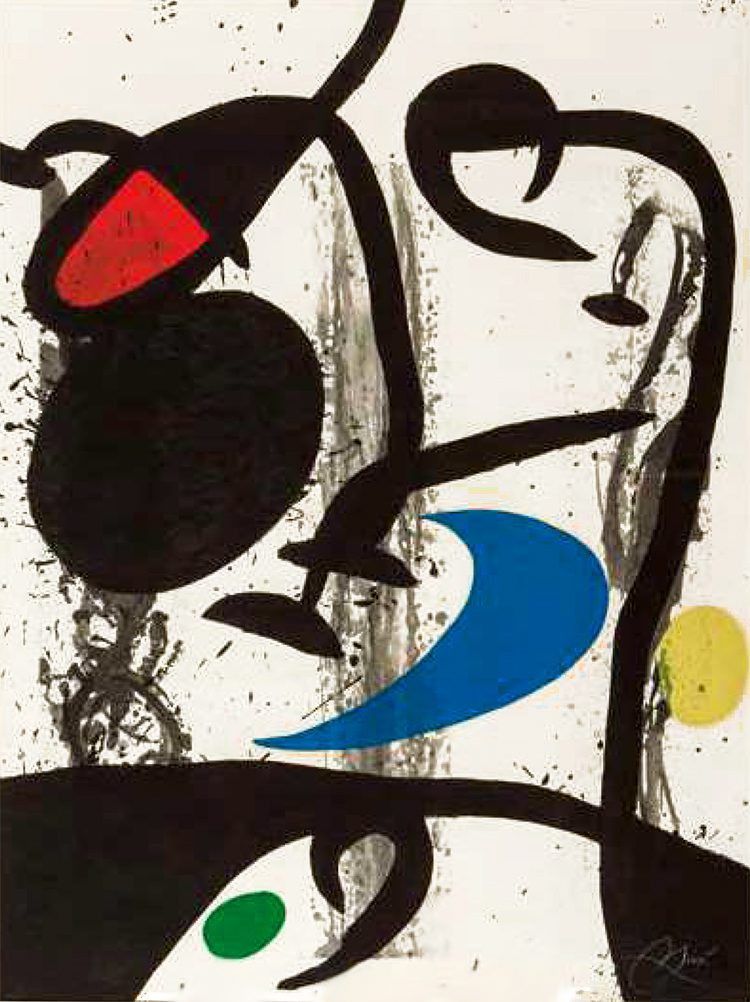 Joan Miró (Barcelona, 1893-Palma, 1983) Grand Triptyque Noire, 1969 is an intricate work consistent with Miro’s oeuvre. The piece’s title Grand Triptyque Noire likely refers to the three faint monochromatic rectangular forms behind the stark black silhouettes in the foreground. These rectangular shapes, despite being printed, are rendered in a definitively painterly manner; their irregular levels of opacity and value mimic marks made by a paintbrush, though the artist has found a way to replicate them utilizing printing methods. He juxtaposes robust opaque forms on top of the other forms which serve to complicate the work and create depth within the image. These forms are much more organic than their antecedents, though they possess strength and rigidity as well. They are composed of bright saturated hues of red, blue, yellow and orange against jet- black rhythmic marks. Experimenting with varying degrees of transparency, saturation and quality of line, Miro generates a complex work that amalgamates commotion and codification.

Catalogue Raisonné & COA:
Joan Miró (Barcelona, 1893-Palma, 1983) Grand Triptyque Noire, 1969 is fully documented and referenced in the below catalogue raisonnés and texts (copies will be enclosed as added documentation with the invoices that will accompany the sale of the work).

About the Framing:
Framed to museum-grade, conservation standards, Joan Miró (Barcelona, 1893-Palma, 1983) Grand Triptyque Noire, 1969 is presented in a complementary moulding and finished with silk-wrapped mats and optical grade Plexiglas.