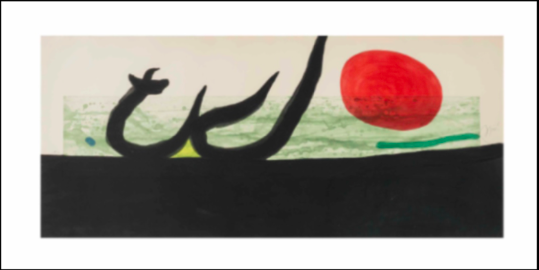 La Grève noire (The Black Strike), 1973 is an exciting work by Joan Miró that showcases Miró’s creative skill in printmaking. The composition of this work emphasizes Miró’s talent in creating balanced designs. He counteracts the dark lower half of the work with keeping the negative space around the line work above blank. This allows the viewer’s eye to bounce around to the colorful circles and splotches without getting dragged too much to one area. Miró chooses to accent the thick line work with his familiar color palette of red, yellow, and green. The unusual shape of the paper makes this work especially captivating in person. The long width of the work emulates a landscape and horizon. La Grève noire (The Black Strike), 1973 is an incredible example of Miró’s artistic style.

This work is a carborundum etching and aquatint, which was a technique that Miró frequented in his work. Carborundum is a silicon and carbon compound that is used for a variety of functions but can also be used to create prints.  Carborundum printing creates gradient tones and sandy textures. Miró is one of the few artists who mastered this medium.

Created in 1973, Joan Miró La Grève noire (The Black Strike) is an Aquatint, etching and carborundum on Arches paper. This work is hand-signed by Joan Miró (Barcelona, 1893 - Palma, 1983) in pencil in the lower right margin. Numbered from the edition of 50 and some H.C. (hors commerce impressions).

Catalogue Raisonné & COA:
Joan Miró La Grève noire (The Black Strike), 1973 is fully documented and referenced in the below catalogue raisonnés and texts (copies will be enclosed as added documentation with the invoices that will accompany the sale of the work).

About the Framing:
Framed to museum-grade, conservation standards, Joan Miró La Grève noire (The Black Strike), 1973 is presented in a complementary moulding and finished with silk-wrapped mats and optical grade Plexiglas.