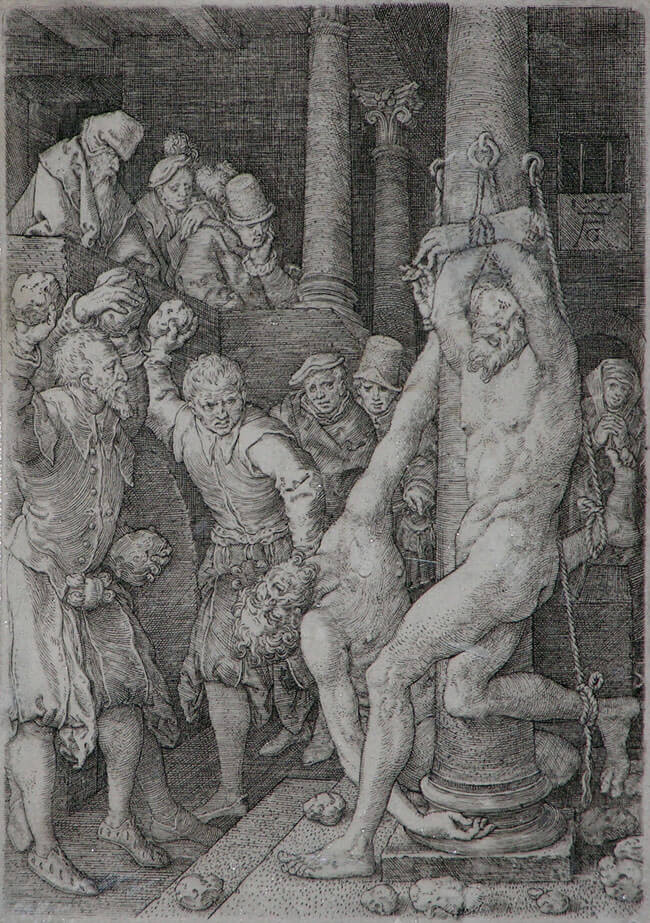 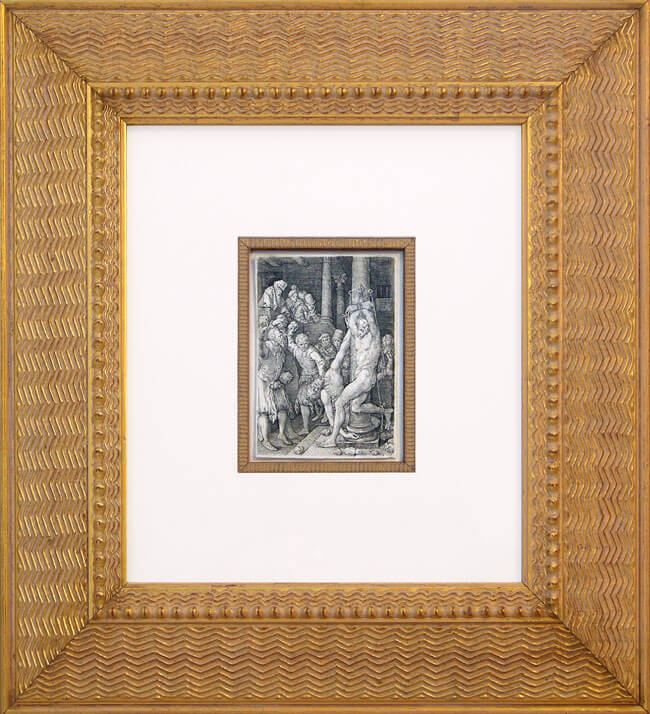 Inspired by the moralistic, biblical tale of Susanna, this scene depicts the two elders that were accused of spying on our heroine in her garden.  Truth and virtue prevail and the two men are shown here, receiving their fate of stoning upon their judgment.

Created in 1555, this original engraving is from the only state printed on a fine laid paper. This work is monogrammed in the plate ‘AG 1555’ in the upper right. A wonderfully saturated impression, the black lines remain bold and strong.
Aldegrever was part of the group with the group known as "The Little Masters". As the title indicates, The Little Masters were interested in created complex images on small and micro scales, which range in size from that of a postage stamp to a large playing card. These small works were a wildly desirable commodity sought by the urban elite and educated merchants of Renaissance Germany. The proliferation of works by the "Little Masters" coincided with the rise and demand for Kunstkammers, which is German for display case. These cases, which took their place in Renaissance German households, functioned just as our modern shadow boxes do, displaying the collector’s interests and knowledge. “Susanna Accused of Adultery” is a particularly magnificent piece because it includes multiple layers of movement and action on a very small scale. This is a marvelous piece, and a very special addition to any serious collection of Old Master prints, “Little Masters” prints, and Aldegrever collections.

1) A Masterworks Certificate of Authenticity will be included with the sale of this work.

About the Framing:
Conservation framed with archival materials and museum quality, this work is float mounted on cream linen in an ornate gilt frame.  The brilliant gold of the moulding accentuates the contrasting tones in this piece.  The sculptural detailed rounded leaf forms compliment the natural lines and forms in this work.  Completed with white, linen-wrapped mats and a matching gold inner fillet, this work is set behind an archival Plexiglas® cover.