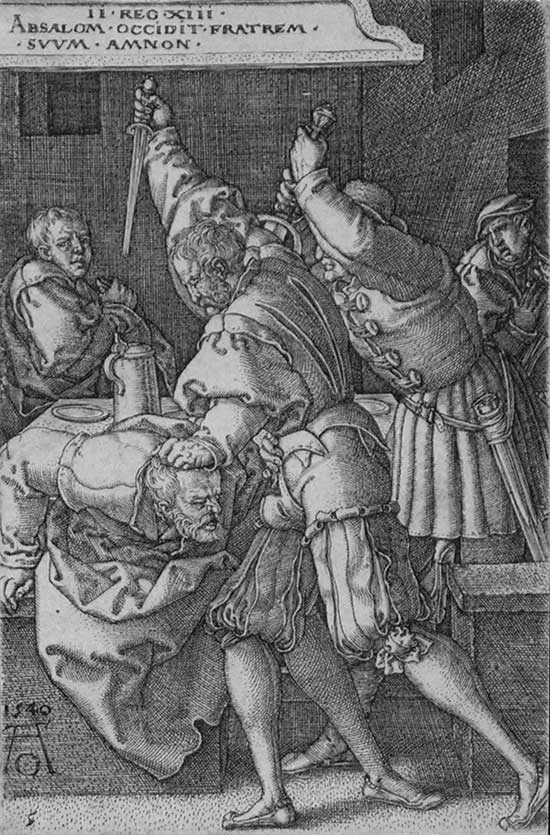 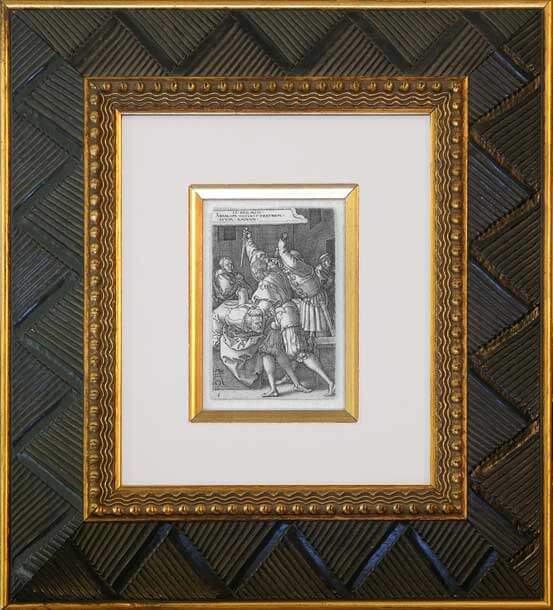 This work is an intricate examination of the physics of the human form if not a peek into the human mind. In the foreground Absolom and one of his colleagues gather momentum, raising their arms as they prepare to thrust their swords into Amon who writhes under Absolom's grip. Meanwhile, two onlookers in the background struggle to turn from the gruesome scene. Unfortunately human curiosity gets the better of them, and their faces reveal a mixture of horror and interest as they flinch at the violence unfolding before them.

This etching was done in 1540 and is printed on 16th century laid paper.

Aldegrever was part of the group with the group known as "The Little Masters". This title indicates the small scale of their works which range in size from that of a postage stamp to a large playing card. These small works were a hot commodity sought by the urban elite and educated merchants of Renaissance Germany. The proliferation of works by the "Little Masters" coincided with the rise and demand for Kunstkammers, which is German for display case. These cases which took their place in Renaissance German households, functioned just as our modern shadow boxes do, displaying their interests and knowledge.

It is estimated that the literacy rate in any Renaissance Germany city was only 10-15% and these small works, whose subjects depicted allegories or esoteric references to Roman history and mythology, were intended for an educated and literate audience. That said, the success of these small works depended upon their popularity with those who could understand and appreciate the subject matter. To a certain extent, works of the "Little Masters" functioned as accoutrements of class, in that their ownership and display in a Kunstkammer indicated that the possessor was educated and literate. This particular piece makes reference to a biblical story and it is notable for Aldegrever's elegant depictions of the body, which distinguished him from his contemporaries who were more interested in the details of architectural perspective and landscape. Replete with wiry legs, small heads, and draped clothing, this piece is a wonderful relic of the early stages of Mannerism. Aside from the style of the piece, what is most remarkable is the ability of Aldegrever to compact and depict in remarkable perspective the drama of the murder of Amon all within the space of a small playing card. The artwork of Heinrich Aldegrever can be compared to Callot, Castiglione, Durer, Hollar, Ostade and Rembrandt.