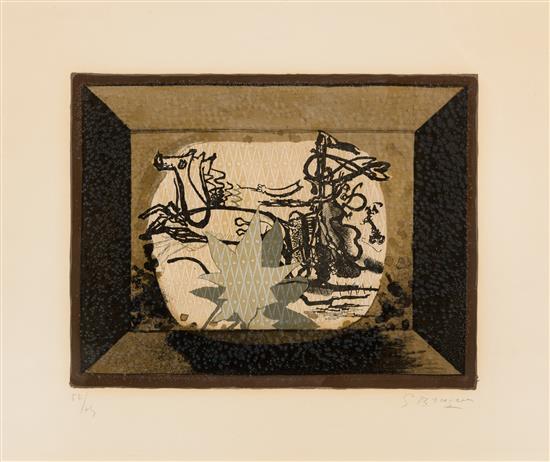 Georges Braque Le Char III (The Chariot III), 1955 instantly captures the viewer's attention. Considered an ancient symbol of power and glory, the chariot is delved with history that dates back to 2000 B.C. Braque tapped into this inherent symbolism and history as he created this exciting and eventful scene.

Featuring rearing horses in flight while pulling a chariot behind them, this work is full of movement and action. Composed of curvy lines, the satirical chariot driver lacks a face but appears caught up in the chaos and action, as their hair blows back into the wind. Braque utilizes a brilliant color contrast between the shades of brown, crème, and black and frames the story in a shadow box, as if we as the viewers are looking back in time.

Catalogue Raisonné & COA:
Georges Braque Le Char III (The Chariot III), 1955 is fully documented and referenced in the below catalogue raisonnés and texts (copies will be enclosed as added documentation with the invoices that will accompany the final sale of the work).

1. Vallier, Dora. Braque: The Complete Graphics. 1982. Listed and illustrated as no 98.
2. A Certificate of Authenticity will accompany this work.

About the Framing:
Georges Braque Le Char III (The Chariot III), 1955 is framed to museum-grade, conservation standards, presented in a complementary moulding and finished with linen-wrapped mats and optical grade Plexiglas.