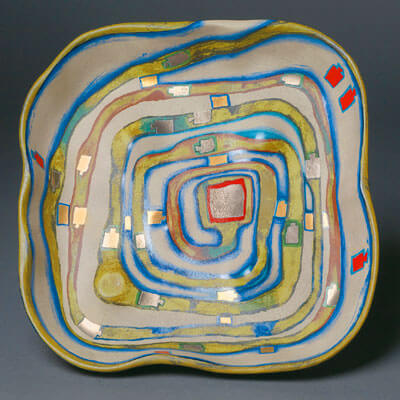 Curved lines rotate and undulate, creating a spiral beautifully lacking a perfect sense of balance or proportion. Hundertwassers (Vienna, 1928- RMS Queen Elizabeth 2, 2000) lines appear to have minds of their own as they snake around each other over the uneven surface of the dish. Brilliant flecks of metal capture the light and contribute to the overall topsy turvy nature of this piece. According to the Rosenthal certificate, "The spiral is the leitmotif of Friedensreich Hundertwassers art. For him, the spiral symbolizes life and death. This ceramic dish, which Hundertwasser has designed specially for Rosenthal, has the appearance of a growing organism which becomes alternately thinner and thicker…Hundertwasser's spiral obeys the law of vegetable growth. Here it is his intention to make the observer aware of the unison in which human creatures can live with their natural, organic environment."

Have one to sell? Sell Friedensreich Hundertwasser fine art with us

Sell Friedensreich Hundertwasser artwork with us. We will research its value and popularity for you.