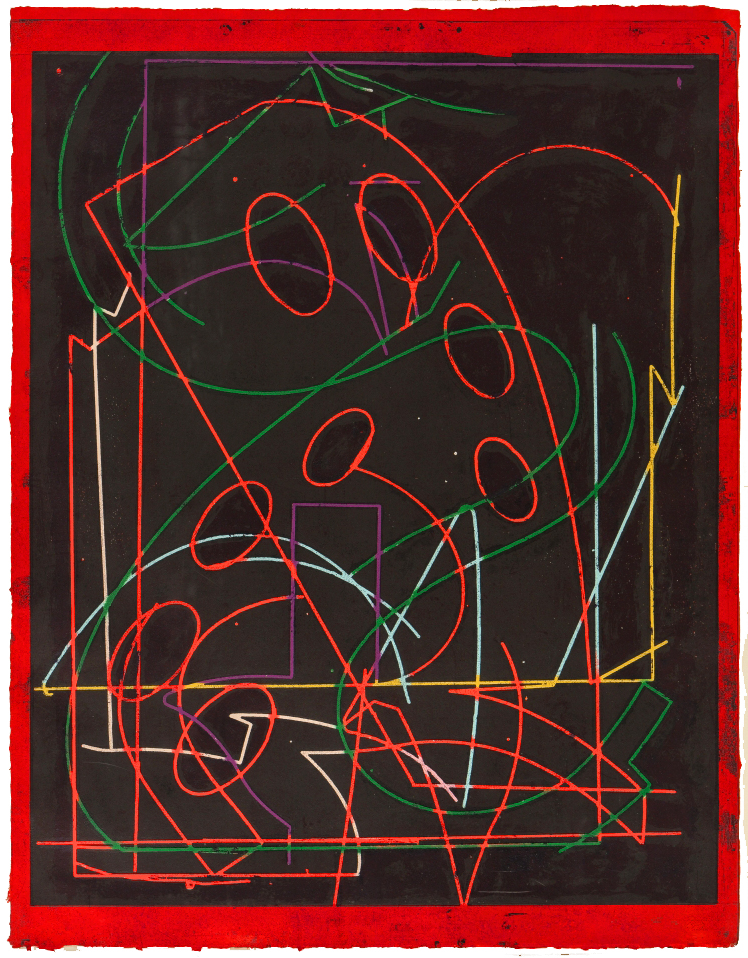 Frank Stella Talladega Five I (from Circuits Series), 1982 is an immediately enthralling, capturing the viewer with the heat-radiating red border and dynamic red lines rushing and curving around the chalkboard-black background. Mixed in with the red are French curve tracks of green, light blue, and lightning-bolt angles of yellow. Named after the famed racing track in Alabama, the pieced embodies the exciting frenzy and cool speed of race cars, the lines evoking the sharp tire tracks left on heated pavement. The most minimal of the Circuits series, the work carries the most powerful presence, achieved through the bold minimal color scheme and dramatic framing. Despite the geometric formal qualities, the many right angles and perfect ovals, the piece is fantastically organic, alive with movement and energetic heat. Up close, the richness of the work is all more palpable, as the viewer takes in the wonderful thick texture of the black pigment which is anything but flat. Black was a prominent stylistic element in Stella’s earlier work, and this striking relief and woodcut proves the artist’s remarkable ability to endow the hue with visual potency.

Catalogue Raisonné & COA:
Frank Stella Talladega Five I (from Circuits Series), 1982 is fully documented and referenced in the below catalogue raisonnés and texts (copies will be enclosed as added documentation with the invoices that will accompany the sale of the work).

About the Framing:
Framed to museum-grade, conservation standards, Frank Stella Talladega Five I (from Circuits Series), 1982 is presented in a complementary moulding and optical grade Plexiglas