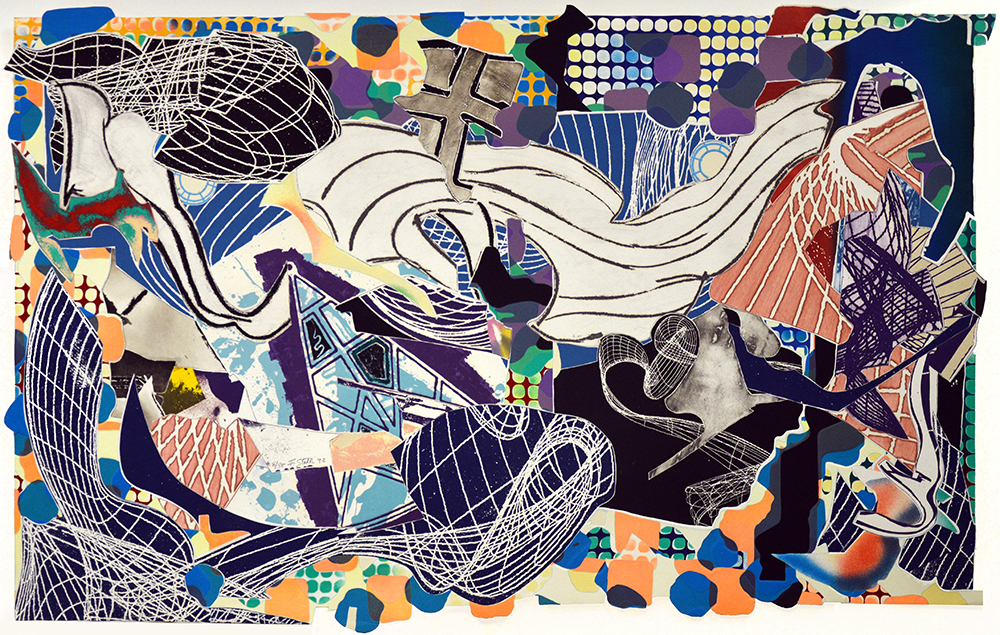 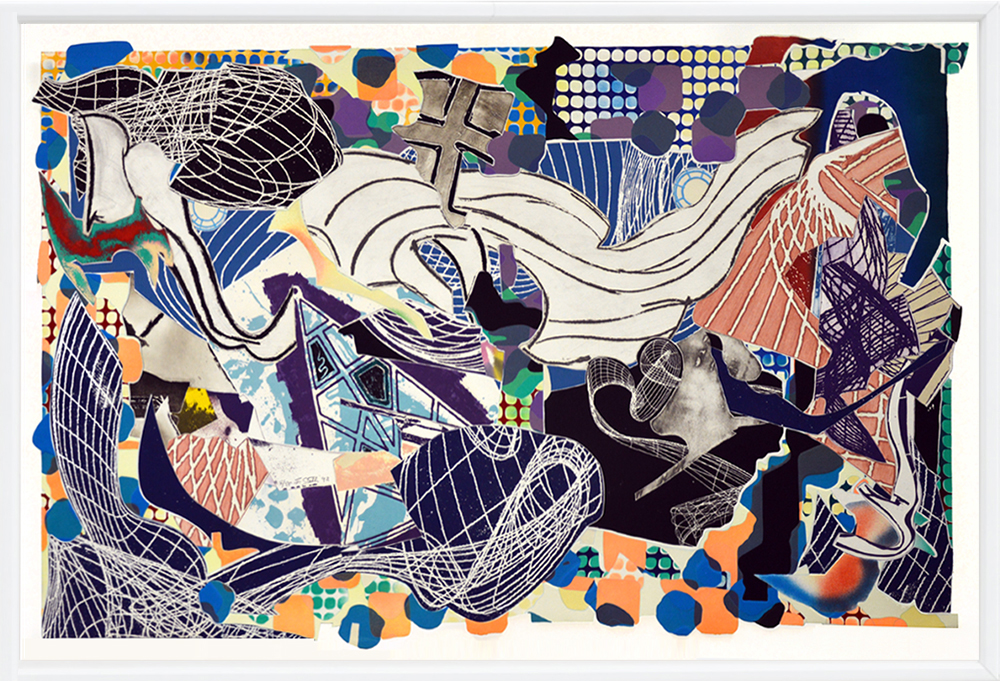 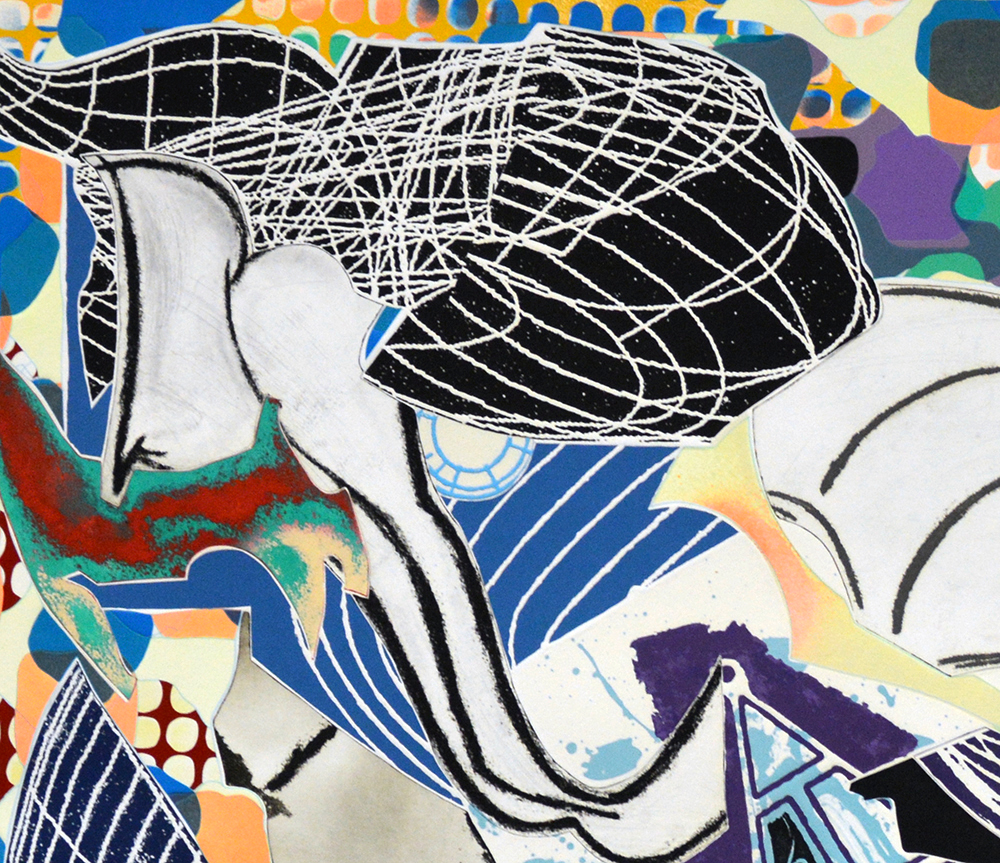 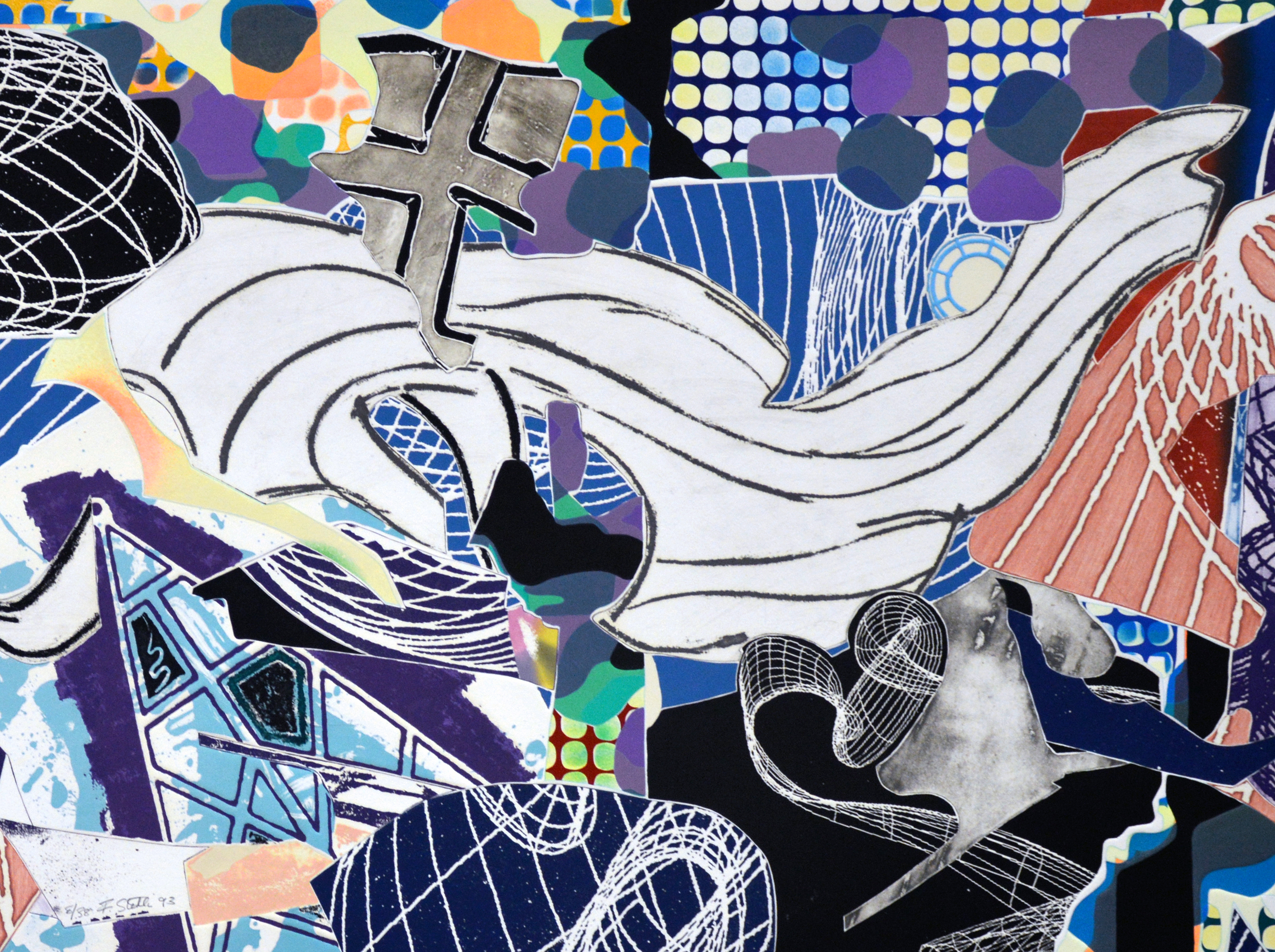 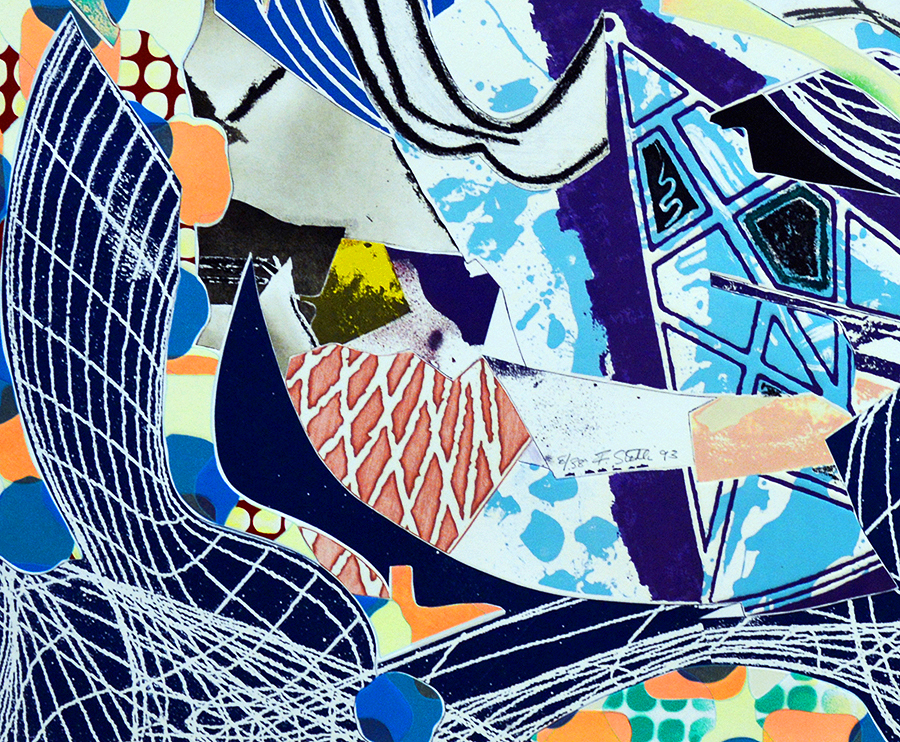 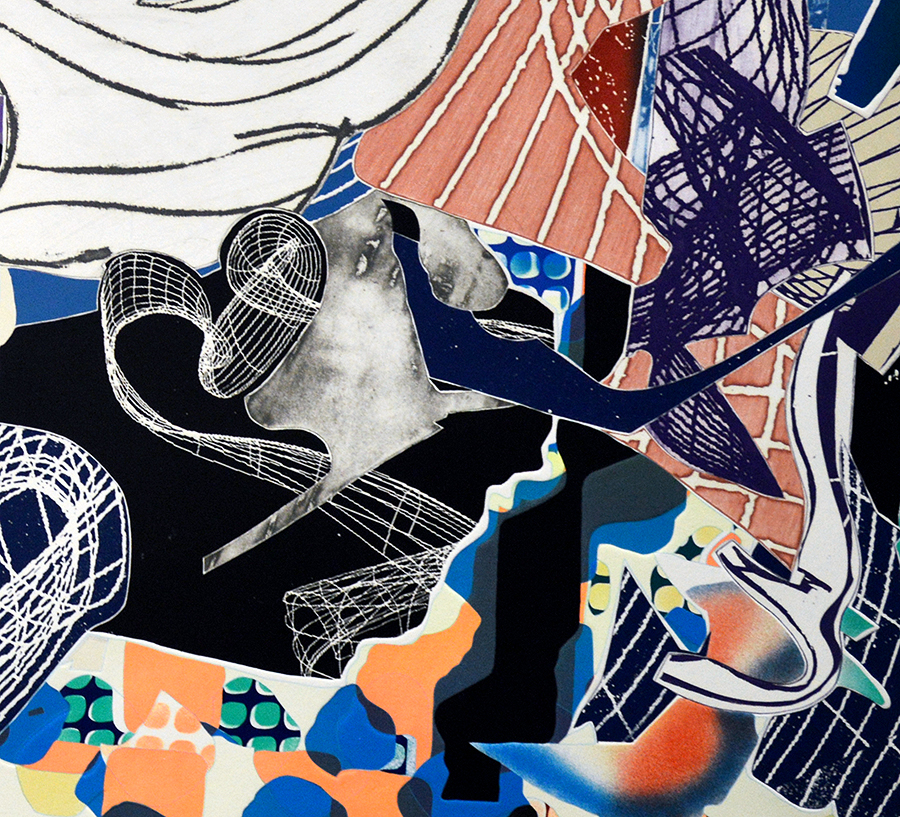 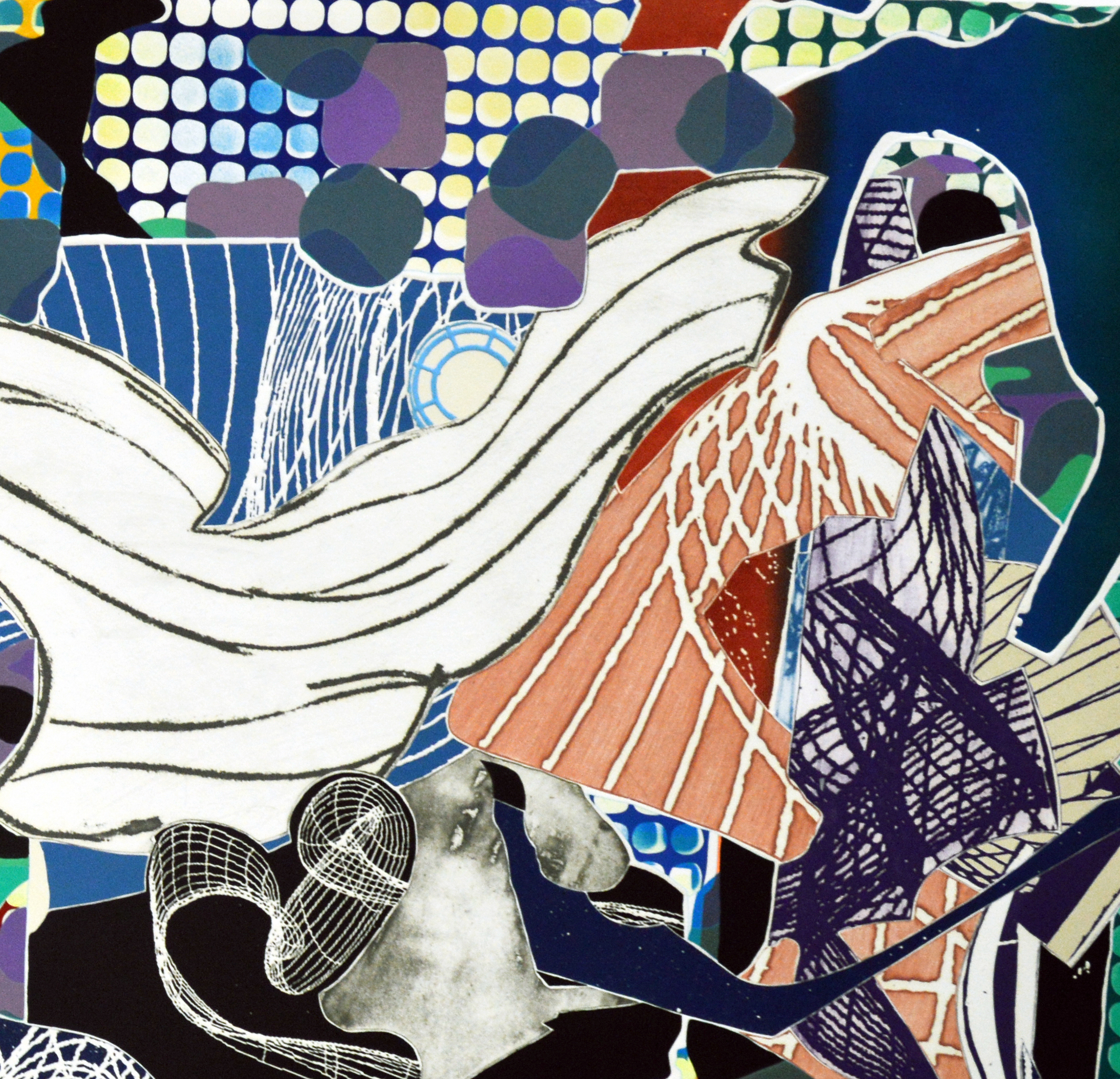 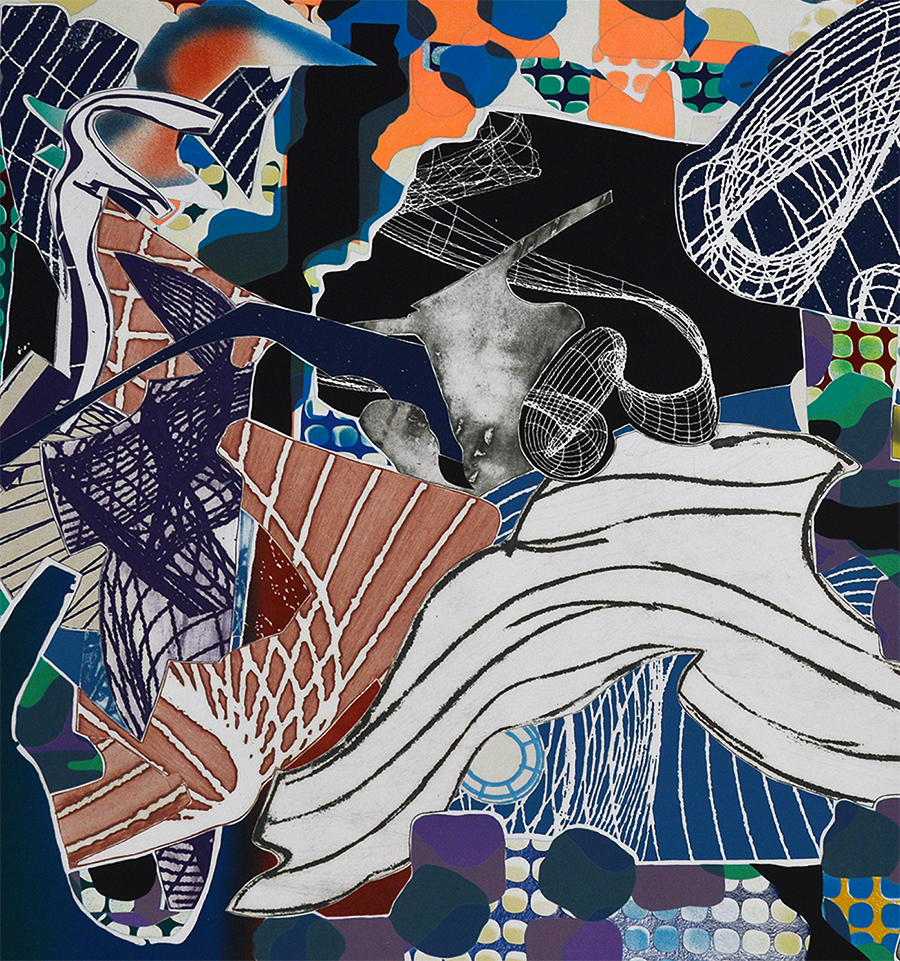 Frank Stella Monstrous Pictures of Whales, 1993 is second installment in the artist’s Moby Dick Deckle Edges Series of 1993. This massive work which measures at just over six feet long and is rendered in full chroma. As its title suggests, the composition of the work is filled to the brim with abstract imagery of whale-like forms. Three bulbous forms rendered in dark blue and white grid-like lines are placed at the lower center, lower left corner and upper left corner. They look onward toward the right toward similar “monstrous” cetacean shapes of different colors. Behind these forms lays a background of a grid-like pattern of dots that give the work the illusion of a three-dimensional work. This collage of several printmaking techniques showcases Stella’s mastery over several mediums.

Frank Stella Monstrous Pictures of Whales, 1993 is part of a portfolio of eight works in the artist’s Moby Dick Deckle Edges series of 1993. This body of work derives its name from Herman Melville’s Moby Dick and depicts dense compositions of bright colors and stunning abstract imagery. Also featured in this portfolio are The Whale-Watch, The Battering Ram, The Pequod Meets the Jeroboam. Her Story, Ambergris, The Monkey-rope, A Bower in the Arsacides, The Affidavit, Extracts, and Extracts, State I.

Catalogue Raisonné & COA:
Frank Stella Monstrous Pictures of Whales, from the Moby Dick Deckle Edges, 1993 is fully documented and referenced in the below catalogue raisonnés and texts (copies will be enclosed as added documentation with the invoices that will accompany the sale of the work).

1. Axsom, Richard. The Prints of Frank Stella: A Catalogue Raisonné 1967–1984. Hudson Hills Press: New York, 1983. Listed and illustrated as catalogue raisonné no. 215 on pg. 321.
2. A Certificate of Authenticity will accompany this artwork.

About the Framing:
Framed to museum-grade, conservation standards, Frank Stella Monstrous Pictures of Whales, from the Moby Dick Deckle Edges Series, 1993 is presented in a complementary moulding and finished with silk-wrapped mats and optical grade Plexiglas.