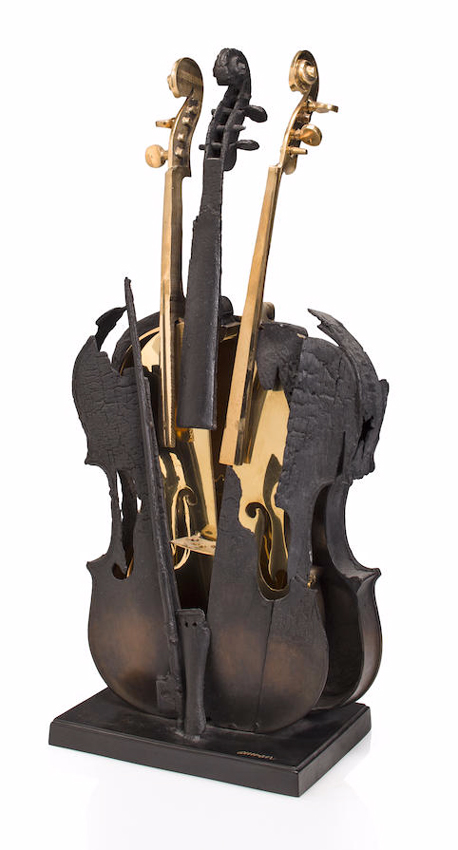 Arman La Fenice III (The Phoenix III) , 2004 is a wonderful sculpture which embodies Arman's artistic style. Dramatically displayed, this striking Arman sculpture depicts a burnt violin transforming before our eyes. Textural and expressive, the charred outer cracks open to reveal golden fragments of the violin. Arman juxtaposes the elegant curves of the violin with the charred and jagged fragments of the sculpture. Expressing that beauty can exist in the aftermath of destruction, La Fenice III (The Phoenix III) , 2004 is titled as such to offer additional emphasis to the theme of rebirth.

The motive behind his fascination with destructed violins is obvious. Arman explains "As I evolved into object art, I found myself being called a Pop-Artist, but the term isn’t exactly right. Pop-Artists redo the object. I used the real object. Marcel Duchamp, who is the obvious father of object art, might have taken a soup can and put it on a pedestal. Andy Warhol would repaint the soup can. Jasper Johns would cast it in bronze. I’d take the soup can and cut it into pieces or weld hundreds of them together in order to change the state of the object from what it was when you first saw it in the supermarket. My interest is in exploring the various worlds of the object."

Created in 2004, this cast bronze sculpture with brown and gold patina has the incised signature of Fernandez Arman (Nice, 1928 – New York, 2005) on the base of the sculpture and numbered from the edition of 100 featuring the stamp of the foundry mark “BOCQUEL FD”

CATALOGUE RAISONNÉ & COA:
Arman The Phoenix III (La Fenice III), 2004 is fully documented and referenced in the below catalogue raisonnés and texts (copies will be enclosed as added documentation with the invoices that will accompany the final sale of the work).

1.A Certificate of Authenticity will accompany this work.