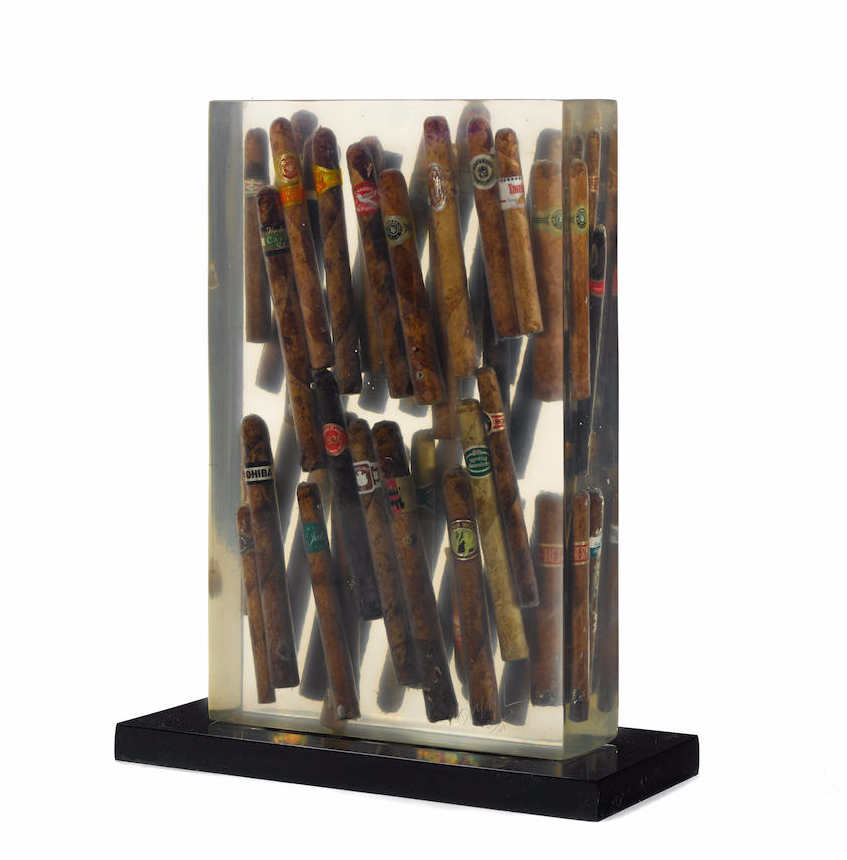 Encased in clear Plexiglas, Arman Waiting to Exhale, 1997 displays an array of different cigars. One of Arman’s so called ‘accumulations’, this work takes a variety of found objects, in this case cigars, and displays them all together. Arman started experimenting with accumulations of found or ‘readymade’ objects after he had strayed into the world of conceptual art with his trash assemblages. Arman describes members of his family as well as his childhood self as being avid collectors, which contributed to his interest in assemblages in his artistic life. The objects themselves come with connotations and fully-formed shapes – Arman than brings them together to create a compositional sculpture that makes the viewer think about the purpose of the objects in everyday life and their value.

Waiting to Exhale, 1997 is full of tension – something that is only increased by the title of the work. The cigars sit, unlit and unsmoked, in their Plexiglas cage, waiting to be of use. Instead, Arman situates them in the in-between, showcasing their usage but disallowing them from fulfilling their purpose. It is almost an uncomfortable sensation, as if we are waiting for a moment that will never come. This is the true genius of Arman’s work.

Created in 1997, this accumulation of cigars embedded in Plexiglas is inscribed with the signature of Fernandez Arman (Nice, 1928 – New York, 2005) on the Plexiglas lower right and numbered from the edition of 100.

Arman Waiting to Exhale, 1997 is fully documented and referenced in the below catalogue raisonnés and texts (copies will be enclosed as added documentation with the invoices that will accompany the sale of the work).