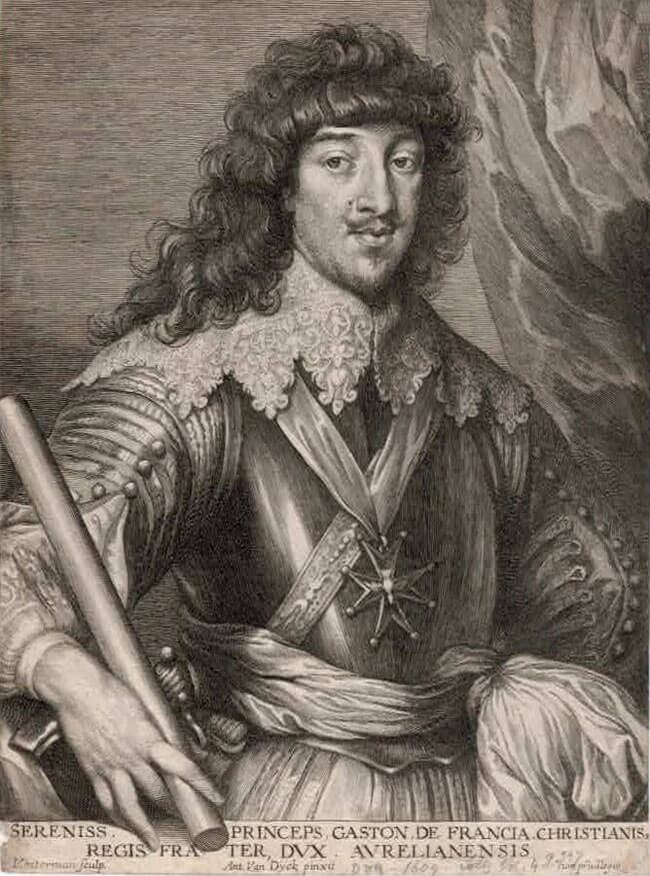 A wonderfully detailed and charismatic portrait, this exquisite work illustrates the technical mastery and artistic vision of Van Dyck. Gaston de France's stately, yet approachable expression reflects Van Dyck's refined ability to comfort and relax his subjects, resulting in a realistic and acute portrait. Gaston de France, Duke of Orléans was the third son of King Henry IV (1553 - 1610) of France and his wife Marie de Medici (1575 - 1642). He was a controversial figure who did not always abide by political or royal law, causing a great many scandals during his time. On two occasions, he was forced to leave France for conspiring against the government, his mother, and her Prime Minister Cardinal Richelieu (1585 - 1642). While exiled from France, he met Marguerite of Lorraine (1615 - 1672) and fell deeply in love with her. The two eloped despite the tension between their respective countries. Though their marriage was found out and nulled by King Louis XIII (1601 - 1643), they were ultimately allowed to remarry upon King Louis XIII's death. Donning an elaborate garb with a large medallion around his neck, Gaston de France appears as royalty. With his long, curling hair and small, upturned moustache, Gaston de France indeed appears as a somewhat sly figure, capable of defying his family and immersing himself in political intrigue.

This portrait is a Mauquoy-Hendrickx State VI (of VI), engraved by Lucas Vorsterman (Zaltbommel, 1595 - Antwerp, 1675) in collaboration with Anthony van Dyck (Antwerp, 1559 - London, 1641) as part of his Iconographie series of engraved portraits of famous people at the time. The plate has been marked in the lower center of the plate "Ant. Van Dyck pinxit," and in the lower left "Vorsterman fculp." Also marked "cum privilegio" in the lower right of the plate. Beneath the engraved portrait is the inscription: SERENISS. PRINCEPS GASTON DE FRANCIA CHRISTIANISS | REGIS FRA TER, DVX AVRELIANENSIS. This piece is printed on a fine paper with a partial Foolscap with Seven Pointed Collar watermark (Mauquoy-Hendrickx no. 135), dating the piece to c. 1675.