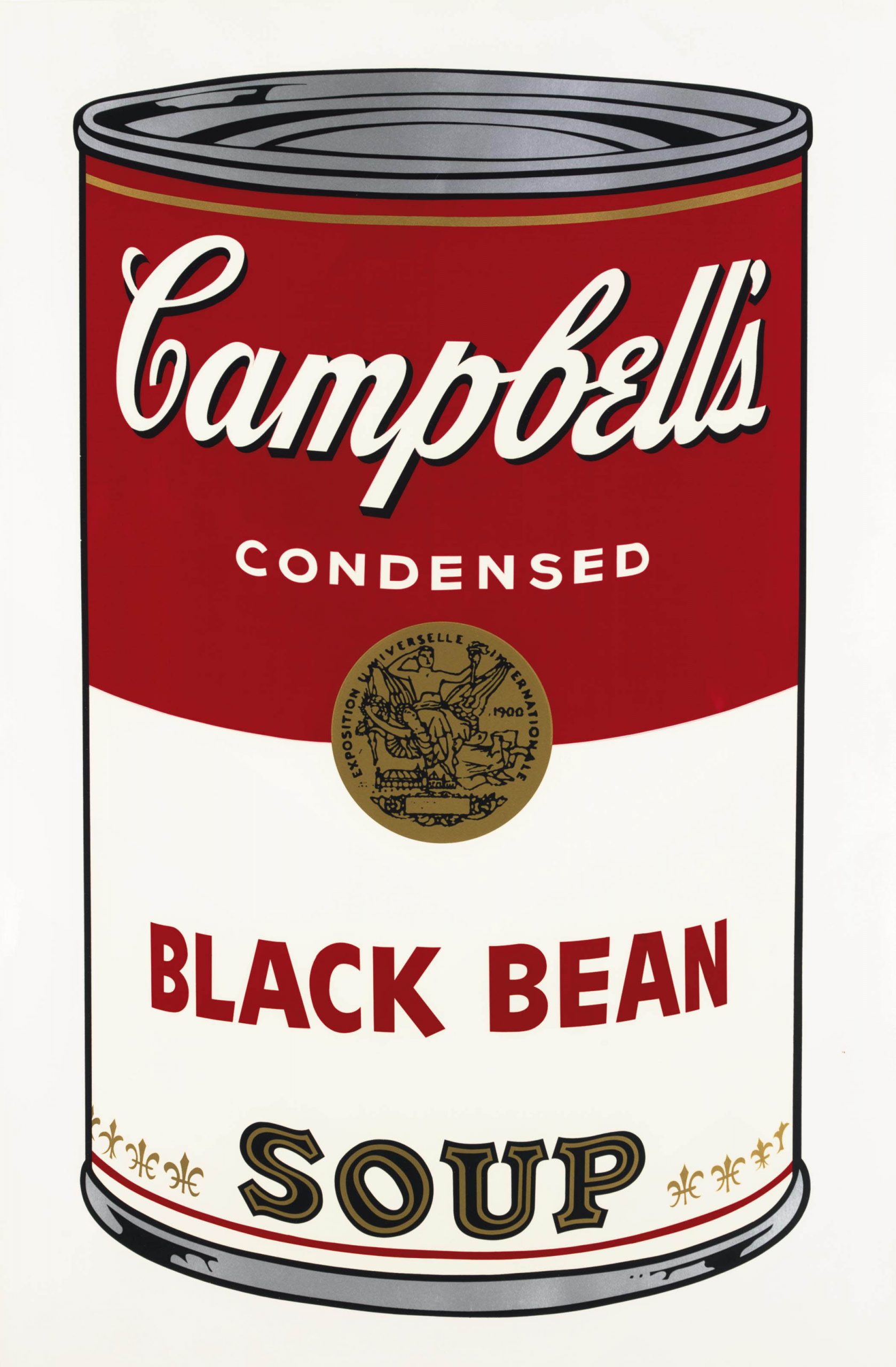 Andy Warhol’s Campbell’s Soup I (Black Bean), 1986 is an incredible example of one of the most famous images Warhol’s ever created. The simple soup can, depicted in flat colors and graphic lines, has become symbolic of Warhol’s infamous pop art style. One of Warhol’s most recognizable subjects, the Campbell’s soup can represents the artist’s fascination with American consumerism and the power of commercial advertisements in the 1980s. Today, Warhol’s Campbell’s Soup Cans remain one of the most influential and iconic works of our time.

The Campbell’s brand was recognizable, and at the time, Campbell sold 32 types of soup, black bean being one of the more popular. Warhol is known for his fascination with mass consumption; these works evoke the brand’s advertisements. Warhol also had a more personal connection to the subject. He once stated “I used to drink it. I used to have the same lunch every day, for 20 years…the same thing over and over again.”

Andy Warhol’s Campbell’s soup cans propelled him to fame. This portfolio, made in 1968, was actually Warhol’s second take on the Campbell’s soup can idea. The first series of soup cans was made in 1962 and was painted by hand. Switching to screenprinting for this 1968 portfolio allowed Warhol to make each work more consistent, further mimicking the actual cans of soup they were modeled after.

Created in 1968, Andy Warhol’s Black Bean Soup is a color screenprint on Lenox Museum Board and is hand signed in ballpoint pen on verso. It is a unique work of an edition of 250, published by Factory Additions, New York and printed by Salvatore Silkscreen Co., Inc., New York.

This screenprint is part of a portfolio of works Warhol created in 1968 titled Campbell’s Soup I. Other works in the Campbell’s Soup I Portfolio include Tomato Soup, Beef Soup, Onion Soup, Consomme (Beef), Cream of Mushroom, Pepper Pot, Green Pea, Chicken Noodle, Vegetable Made with Beef Stock.

Andy Warhol, Black Bean Soup, from Campbell’s Soup I 1986 is fully documented and referenced in the below catalogue raisonnés and texts (copies will be enclosed as added documentation with the invoices that will accompany the sale of the work).