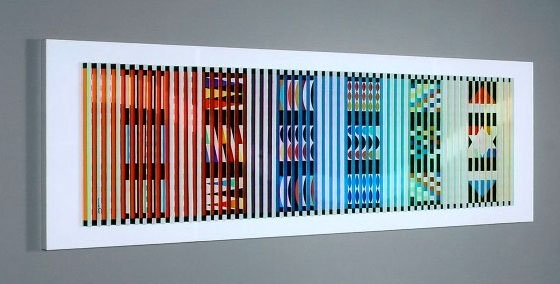 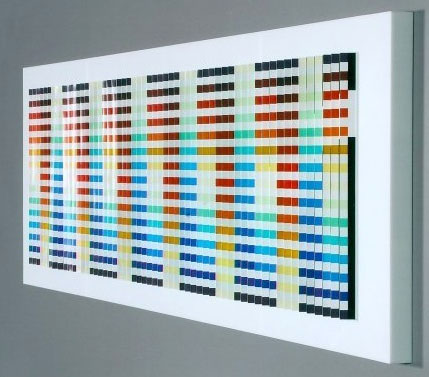 Yaacov Agam Rainbow Rhythm c. 1994-1996 is one of Agam's most monumental and grandiose sculptural works. Using a combination of sculptural and graphic elements, this piece hangs beautifully to create a sense of movement extending from the wall in which it is placed. Beautifully layered with graphic and sculptural elements, this work reveals itself to the viewer through multiple perspectives. Representing Agam's unique perception and revolutionary technique, this piece transforms the way in which we view art through four dimensions. As the viewer moves around the piece, there is an effect of change and transformation inherent in Agam's work. Not only does this work reflect the variety of interpretations fundamental to abstract art, the artist's intention was to represent the ever changing meanings within life itself. Visually enhanced by the fourth dimension of time, this piece changes in appearance as the light surrounding it changes.

Yaacov Agam on Polymorphs: "I have created a theme on each of the parallel surfaces. Standing to one side of the artwork, you see only the composition which appears on the surface nearest you; the more you move towards the center, the more the second composition begins to appear and unite with the first in counterpoint. Seen directly from the front, the different compositions come together to form a new whole, which becomes visible. Like orchestral music, the content and formal characteristics of these compositions are modified and transformed by the domination of first one motif and then the other, in direct proportion to the change in the observer's standpoint in front of the artwork" (as quoted in Solomon, 1981, p. 300).

Catalogue Raisonné & COA:
Yaacov Agam Rainbow Rhythm , c. 1994-1996 is documented and referenced in the below catalogue raisonnés and texts (copies will be enclosed as added documentation with the invoices that will accompany the sale of the work).

1. Solomon, Jack Jr. From the 2nd, to the 3rd, into the 4th Dimension…. Chicago: Circle Fine Art Press, 1981. Polymorphs discussed on pages 30-31.
2. A Certificate of Authenticity will accompany this work.

Sell Yaacov Agam artwork with us. We will research its value and popularity for you.