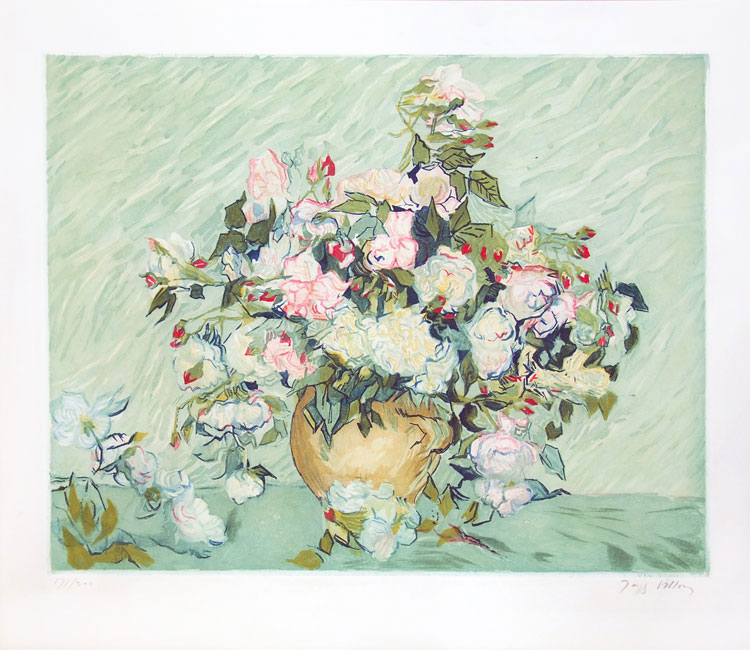 Assaulting the senses, this image captures the floral beauty of the bouquet and intimates the presence of a caressing breeze. Villon captures both the subtleties of texture and tonality, delicately replicating van Gogh's poetic composition.

Adapted from Vincent van Gogh's 1890 composition, titled Vase with Pink Rose, Jacques Villon engraved this image in 1927. Bernheim-Jeune of Paris published the work out of the edition of 200. The name and address of the editor appear in the upper left of the plate and the name of the printer in the upper right. Hand signed by Jacques Villon in pencil in the lower right margin, the work is also marked with an ornate blind stamp that appears as overlapping "ADA" or "APA" in the lower left margin.
Painted in May of 1890, this work signifies van Gogh's valiant recovery from an illness he suffered from between February and April of that same year. Upon his recovery, van Gogh, wrote to his brother stating that the beauty of his surroundings was so compelling he had little time to rest. Van Gogh's new found strength and inherent agitation is discreetly sown into this composition. While the viewer enjoys the poetics of the delicate bouquet of roses, delighting in their haphazard arrangement and exuberant rendering, it is difficult to comprehend that this image was painted only two months before the artist's death. Intended for his brother Theo, van Gogh created this work as an object of decoration, however, the symbolic nature of the image cannot be denied. Drawing upon his sensitive romantic nature, van Gogh delicately suggests the lace like forms of the roses. This delicate suggestion stresses the traditional symbolism of flowers as representations of purity and mortality. As we the viewer enjoy their beauty, the rose has already begun to decay, reminding us of our own transience

Catalogue Raisonné & COA:
This work is fully documented and referenced in the below catalogue raisonnés and texts (copies will be enclosed as added documentation with the invoices accompanying the final sale of the work):

About the Framing:
Framed to archival museum grade conservation standards, this piece is framed in a complementary moulding with silk mats.