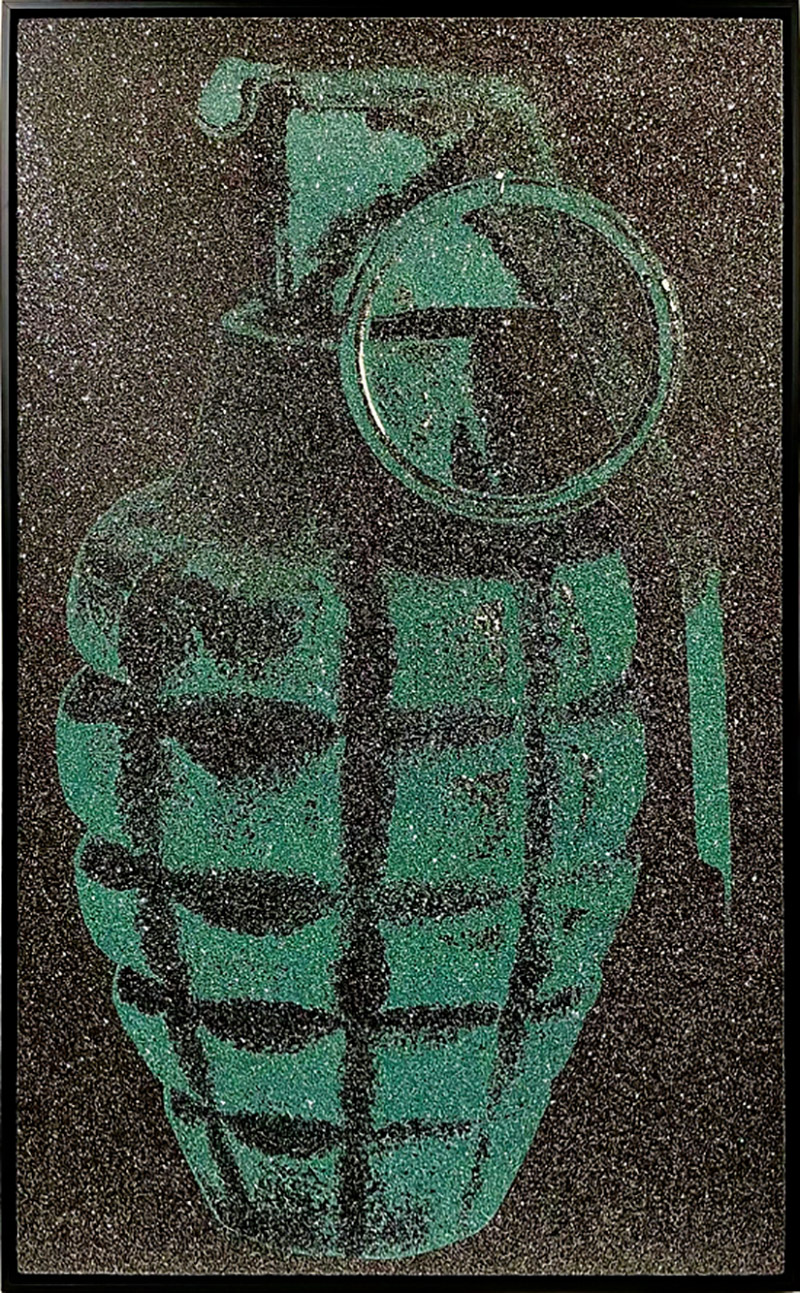 Russell Young New York Grenade – No. 23, 2018 is a demonstrative work that readily engages its audience with the striking visual of a grenade, the diamond dust laden surface reflecting the light off the canvas to distract from the grim nature of the subject matter. Well-known for his vivid and iconic silkscreen paintings of pop culture imagery, Russell Young had created groundbreaking renditions of a visual journey of his personal ambition to shape his ‘American Dream’ and the challenging perception and understanding of what it means to be an American in the 21st century. Young experiments with diamond dust in many of his works, drawn to the texture and luminous finish. He describes how he first discovered this technique: “It was an old bag of Warhol’s diamond dust. I was looking to give my paintings a three-dimensional quality and a reflective quality; we had tried inks, and we tried all these different things, and then we suddenly discovered this old bag ... We put it onto the painting, and it took on this fantastic life. I took it back to California and pinned it on the wall in my house, and at night the moonlight hit it, and it reflected. And then I took two or three of the paintings outside and hung them on the bushes, and I thought, I love this stuff.”

After experimenting with Diamond Dust that he created himself, he found that the material provided a meditative quality to his screen prints, while also captivating and capturing the light as it glistens across the canvas’s surface, forming a present aura that invades the conscious; they became physical manifestations of the fragile, transitory nature of fame in popular culture. Young’s New York Grenade No. 23, 2018 is not excluded from these works, the multi-hued green grenade standing prominently in the center of the canvas. The pin still locked in place, a ticking bomb waiting to erupt, alluding again to this temporality that exists at the center of today’s current pop culture, the potential threat that looms over those who exist in the limelight.

Russell Young’s work as a contemporary artist brings a sense of elegance and charm to the old Hollywood prestige with his appropriation of celebrity imagery with a neo-pop twist. Young's high contrast, posterized images are often rendered in neon hues creating colorful screenprints of known photographic images. Young spent fifteen years as a celebrity photographer and music video director, which allowed him to explore varying themes around fame and glamour.

Created in 2018, this acrylic and diamond dust on canvas is hand-signed and dated by Russell Young Russell Young (Northern England, 1959- ) on verso. This is a unique and original work.

Catalogue Raisonné & COA:
Russell Young New York Grenade No. 23, 2018 is fully documented and referenced in the below catalogue raisonnés and texts (copies will be enclosed as added documentation with the invoices that will accompany the sale of the work).

About the Framing:
Framed to museum-grade, conservation standards, Russell Young New York Grenade No. 23, 2018 is presented in a complementary moulding and finished with silk-wrapped mats and optical grade Plexiglas.

Sell your Russell Young fine art with us. We offer free evaluations. Learn more about selling with us.