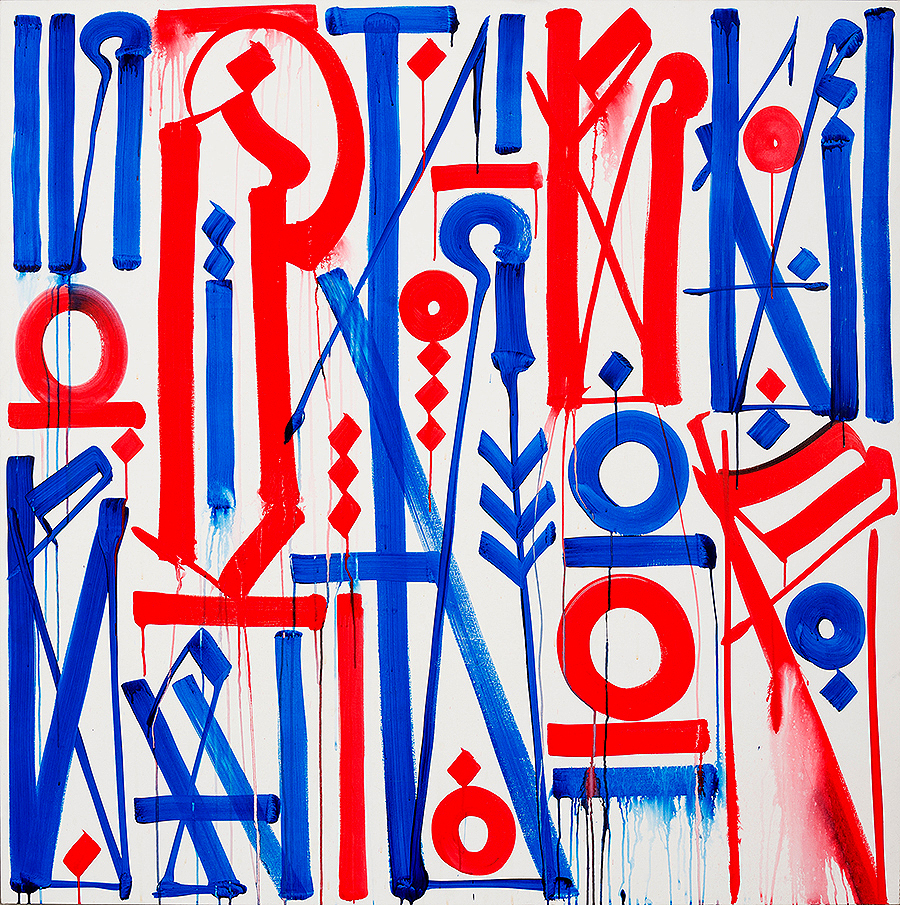 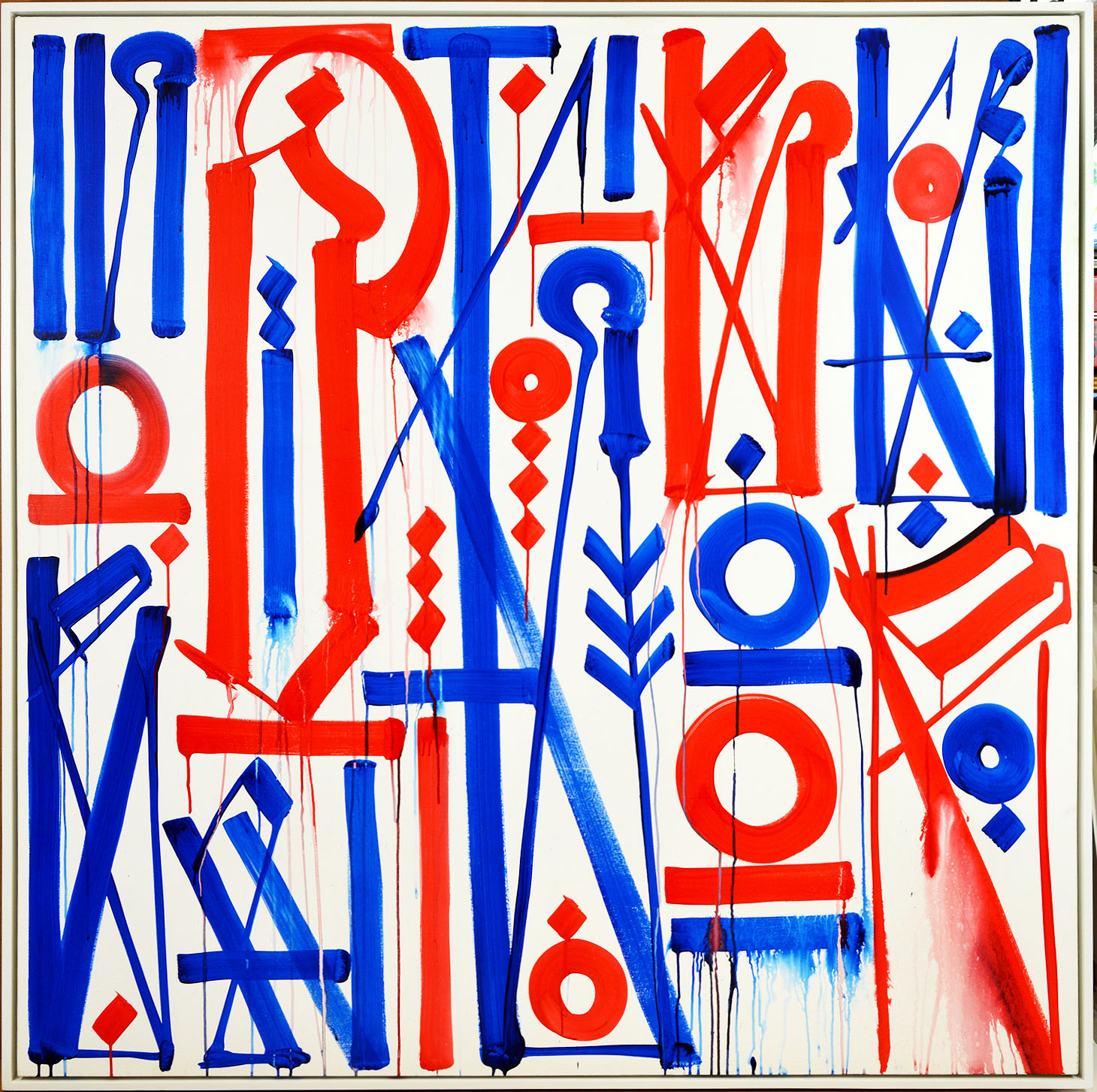 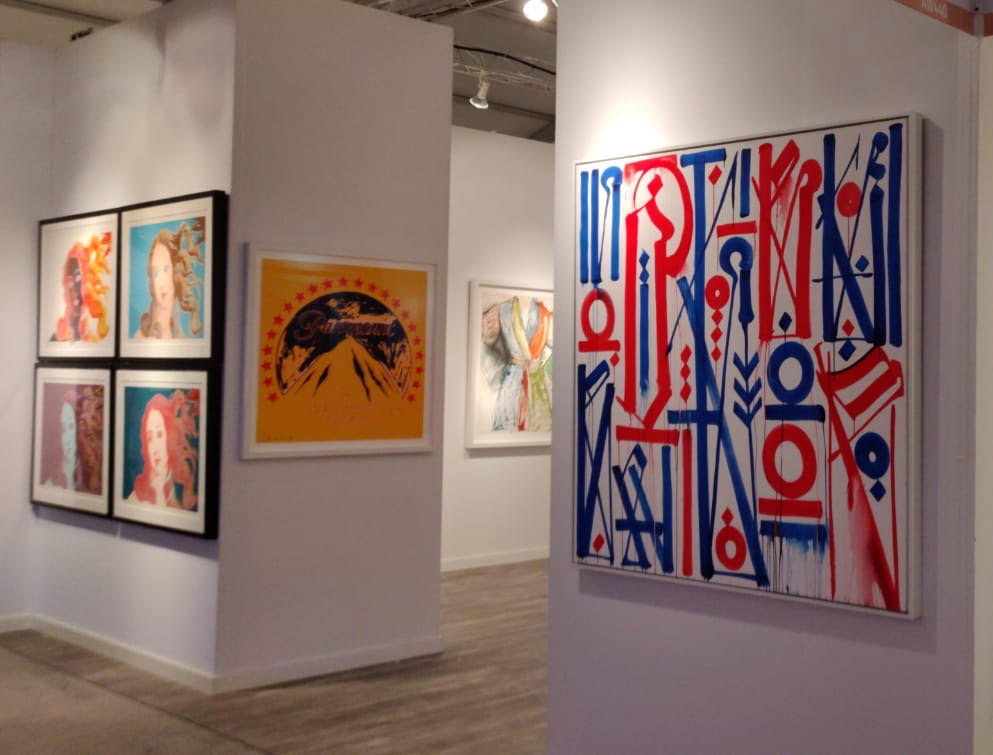 RETNA Untitled , 2014, acrylic on canvas, features a limited palette of red and blue against a white background. The composition is filled with RETNA’s distinct imagery formed of the artist’s stylized linear text-based forms. Geometric elements punctuate long strokes and diagonals to formulate a unique script with embedded significance. The patterning and structure cannot be matched with one existing written alphabet, with influences from Hieroglyphics, Arabic calligraphy, and even graffiti.

This particular painting is executed with this typographic style, however with an underlying expressionism. While the arrangement of symbols and lines is systematic and carefully placed, RETNA exercises his artistic freedom by embracing the spontaneity of acrylic paint. Drips of paint slide down the canvas in thin, wavering lines. In other areas watered down acrylic blurs the hard edges of RETNA’s otherwise crisp script.   These drips disrupt the uniformity of the composition ever so slightly, while mirroring the downward motion of RETNA’s brushstrokes. One cannot overlook the bright coloration of this painting. The pungent palette of red, white and blue is vivid, strong, bold, and laden with symbolism. RETNA’s paintings are not only mesmerizing for their striking visual appeal, but also for their ability to provide the engagement that the contemporary art admirer yearns for. The viewer feels challenged to decipher the meaning; this first instinct propelled by our relationship with the written word.

Catalogue Raisonné & COA:
RETNA Untitled, 2014 is fully documented and referenced in the below catalogue raisonnés and texts (copies will be enclosed as added documentation with the invoice accompanying the final sale of the work).

About the Framing:
Framed to museum-grade, conservation standards, RETNA Brooks of the Mark, 2014 is presented in a complementary moulding.