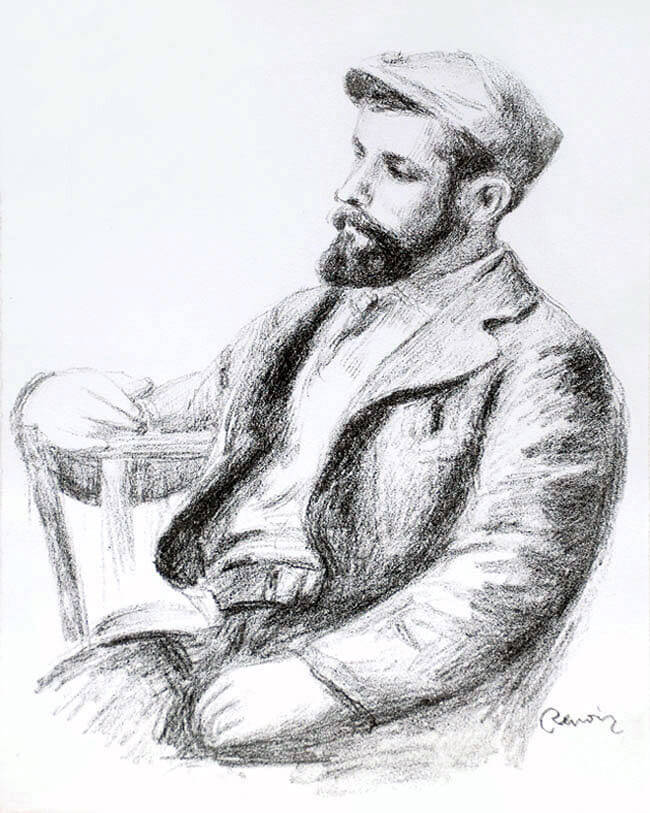 Created c.1904, this portrait was from the edition of 950 and is from an only state printed on Vellum paper with deckle edges along the borders (there was also an edition of 50 on Japon paper). Signed 'Renoir' in the stone in the lower right. Commissioned in 1919 to be part of an album of 12 lithographs created by Renoir, this portrait was printed and published by Ambroise Vollard in Douze Lithographies Orginales de Pierre-Auguste Renoir.

Having been close friends with a number of artists in Paris at the time, Renoir created an intimate portrait of a fellow artist, Louis Valtat (1869-1952) who worked closely with Renoir and whom he traded art techniques with. Valtat was also an acquaintance of Ambroise Vollard who was the first to suggest to Renoir of using their mutual friend as a subject of a portrait. Seated in a relaxed and comfortable pose in a chair, Valtat is depicted in a casual suit with his right arm propped along the back of the chair, and his frame positioned slightly sideways in the seat. His prominent facial features, namely his chin, and nose, are delicately shadowed and detailed coupled with the contemplative expression seen in his eyes. Renoir uses his overall talent and skill in portraiture to create this telling and revealing portrait of his close friend and colleague.

It was not until the Renaissance of print-making in France began to wane when Pierre-Auguste Renoir became fascinated with the medium and produced several prints during the late 1890s and into the early 1900s. This portrait of Louis Valtat was one of the results of his pursuits into lithography.

3. Stella, Dr. Joseph G. The Graphic Work of Renoir, Catalogue Raisonné, London. Listed as cat. no. 38 and illustrated as plate no. 38. Also listed on the title page folio as Lithographs, no. 38.