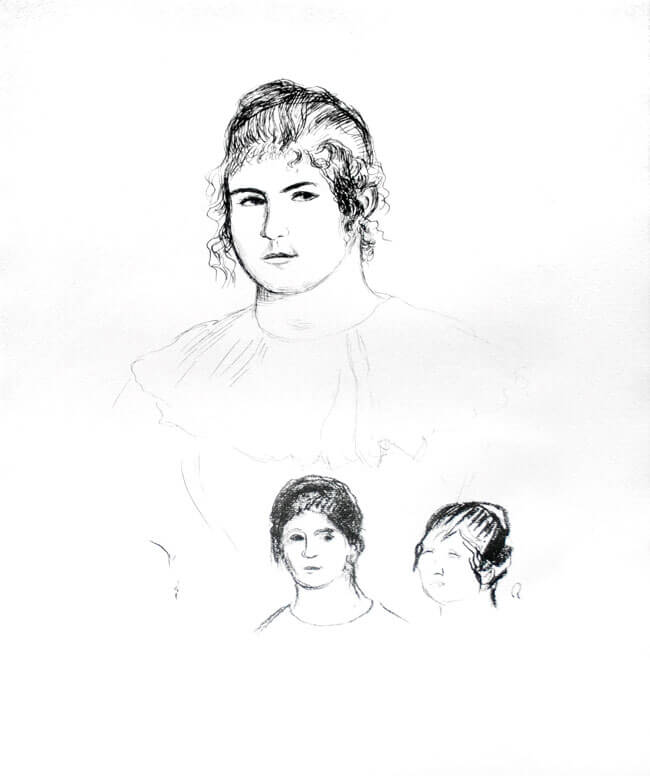 According to Delteil, Gabrielle Renard (1878-1959), the subject of this piece, was Renoir's long time maid. In this exquisite work, Renoir depicts three sketches of his beloved maid, two smaller sketches on the bottom and one large central bust. He conveys his subject as dignified with dark, thick eyebrows and hair pulled back with curled tendrils hanging loosely down. Renoir focuses on the face of Gabrielle, shading with dark lines to add a sense of depth and detail to her face. He only lightly conveys her collared garment, which softly blends with the background whereas the three bold depictions of Gabrielle's face stand out to the viewer. Renoir positions Gabrielle at a slight angle, yet her piercing eyes stare directly at the viewer, relaying the impression that she is a strong, confident woman.

This original lithograph is initialed 'R' in the lower right corner in the stone. From the edition of 100. Stella notes that André Clot, son of Auguste Clot, has told A.G. Mazo that this lithograph consisting of three sketched heads of Gabrielle is an original by Renoir (catalogue no. 58).

Sell your Pierre-Auguste Renoir fine art with us. We offer free evaluations. Learn more about selling with us.