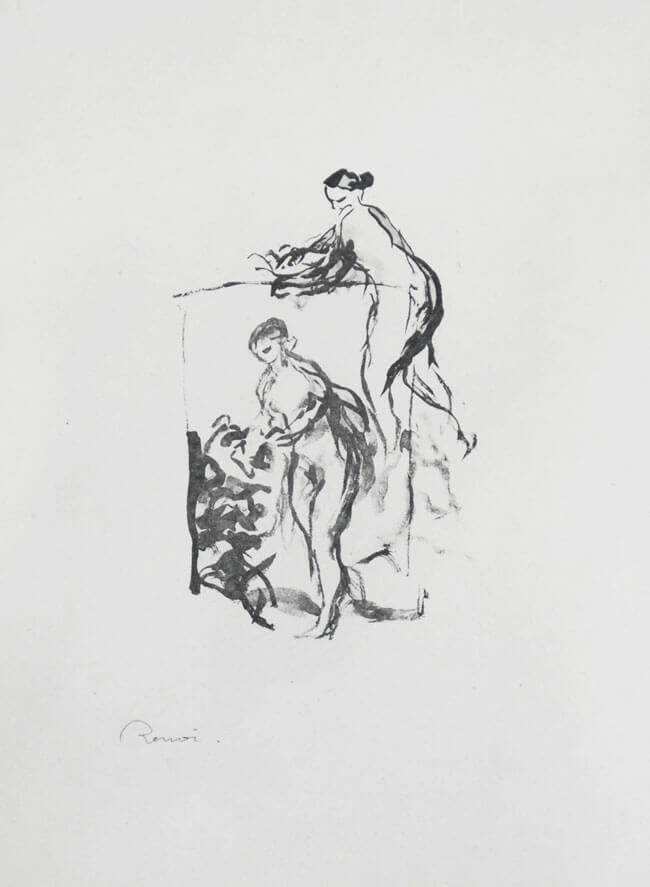 With the addition of a second female nude into his Woman by the Grapevine works, Renoir creates a harmoniously balanced composition that highlights not one but two women, captured in a moment of either work or play. The figure in the foreground, reminiscent of the prior nudes from this series, gently bends at the waste to view a grapevine. She appears slightly more frontal than in previous depictions, as if she is almost stepping towards us, preparing to face us head on. The second figure to the upper right stands in profile and, rather than just examining the grapevine, appears to be actively picking grapes, reaching out with her arms to grab the luscious fruit. The perspective of this work is somewhat skewed, as the second nude almost appears to float in the air rather than rest on the ground next to the first nude, leaving us to wonder if Renoir meant to capture two women within the same image or two separate studies of the same model.

Created c. 1904, this work was published in a volume of 12 lithographs entitled L'Album des Douze Lithographies Originales de Pierre-Auguste Renoir. Printed by Auguste Clot, Paris and Published by Ambroise Vollard, this piece is signed in the stone 'Renoir' in the lower left. This piece is from the edition of 950 printed on vellum paper (total edition of 50 on Japan, 950 on vellum); from the second state.

Sell your Pierre-Auguste Renoir fine art with us. We offer free evaluations. Learn more about selling with us.