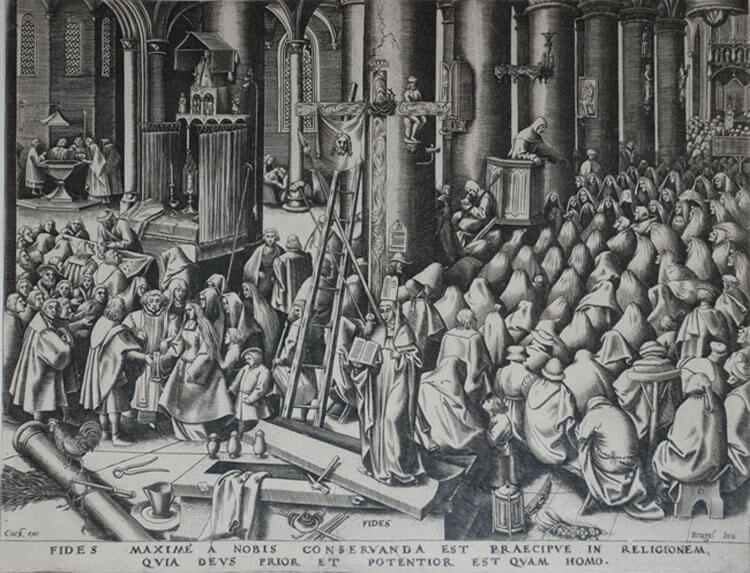 According to H. Arthur Klein:

Faith, garbed like a nun, stands on the lid of the open tomb which contained the body of Jesus. All around her are the objects named in the Gospel story of the crucifixion of Jesus. On her head are the tablets of the Law of Moses, indicative of the Old Testament. In her hands she holds, and points to a passage in, a volume of the New…The immediacy of the dramatic story symbolized here suggests a different and more basic kind of Faith than the formal observances in the church environment elsewhere in the print. (120)

Created c. 1559, Faith was engraved by Philips Galle, based on an original drawing by Bruegel (Breda, 1525 - Brussels, 1569) featuring the following inscription in the lower margin: FIDES MAXIMÈ Á NOBIS CONSERVANDA EST PRAECIPVE IN RELIGIONEM, | QVIA DEVS PRIOR ET POTENTIOR EST QVAN HOMO. (Above all we must keep faith, particularly in respect to religion, for God comes before all, and is mightier than man) . The signature of Bruegel (Breda, 1525 - Brussels, 1569) is inscribed in cartouche in the lower right: 'Bruegel Inu' with FIDES (Faith) in the lower center, with 'Cock exc' in the lower left.

Catalogue Raisonné & COA:
This Bruegel engraving is fully documented and referenced in the below catalogue raisonnés and texts (copies will be enclosed as added documentation with the invoices that will accompany the final sale of the work) :

Set in an Italian style bronze and gold frame, the ribbon detailing of the moulding compliments the meandering curved shapes within the image. Decorative detail echo acanthus leaves which evoke a classical aura to the work. Completed with white, linen-wrapped mats with a matching gold inner fillet, Faith is set behind an archival Plexiglas® cover.