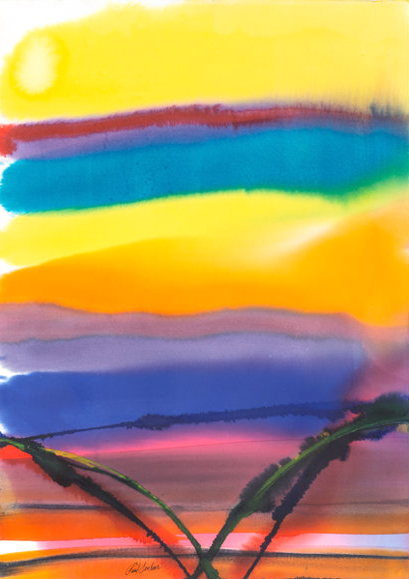 Paul Jenkins Untitled,  1979 is chromatic piece of vivid colors horizontally placed and blended together on the pictorial plane. Stripes of color vary in transparency and give the illusion of light playing across the smooth surface of the paper. The color blending increases slightly on the right side of the piece, indicating Jenkins’ method of using the surface and the movement of the paper to apply the paint, rather than using a conventional brush. The interplay among the varying shades of yellow, orange, red, purple, green and teal dominant the space and suggest a lively other-worldly fantasy. Jenkins’ technique with color application leaves small windows of white on the edges, which accentuate the cheerful color palette and lend a sense of movement and freedom to the piece. Four streaks of dark green rise up from the bottom edge of the plane and curve gracefully toward the two edges, bisecting the horizontal stripes and adding a three-dimensional appearance to the painting. This work is a prime example of how Jenkins’ unconventional methods allow him to explore his fascination with spirituality, color, creation and form.

Created in 1979, this watercolor on Arches paper is hand-signed by Paul Jenkins (Kansas City 1923 – New York 2012) in the lower center and signed and dated verso. This is a unique and original work.

Paul Jenkins Untitled, 1979 is fully documented and referenced in the below catalogue raisonnés and texts (copies will be enclosed as added documentation with the invoices that will accompany the sale of the work).

Framed to museum-grade, conservation standards Paul Jenkins Untitled, 1979 is presented in a complementary moulding and finished with silk-wrapped mats and optical grade Plexiglas.