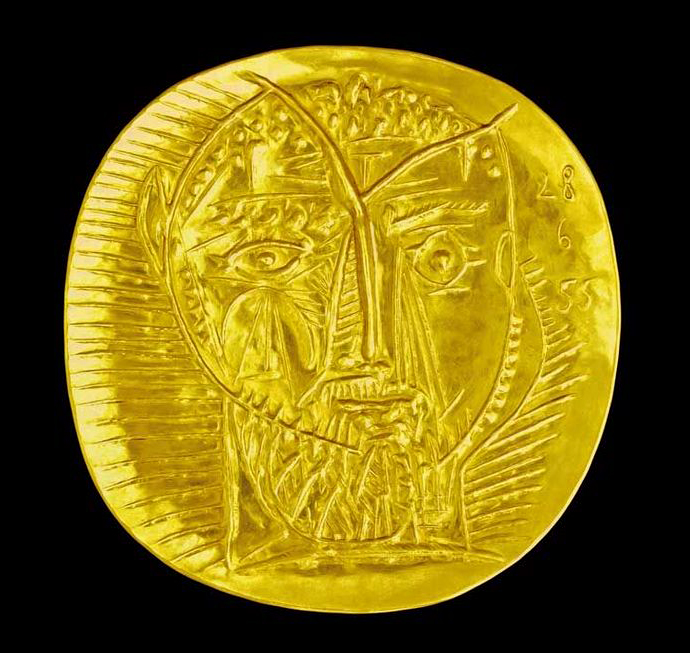 Showcasing one of Picasso’s most beloved subjects, Picasso Visage de faune (Faun’s Face), c. 1970s is a delightful work. Laid upon a delicately lined background, the serious face of a faun stares back at us. The faun, a favorite of Picasso, incorporates his interest in Greek mythology with a love of the playful. This faun surely holds to that, as his crinkles his right eye in delight. The work also showcases Picasso’s immense attention to detail – working on a relatively small workspace, Picasso packs in mass amounts of detailing, from the lines on the fauns forehead, to the delicate hairs on his head and in his beard. A magical piece of art, this medallion highlights the technical beauty and personality of a Picasso artwork.

Created circa the 1970s, this 23K gold medallion is stamped with the artist’s signature ‘Picasso,’ the François and Pierre Hugo reference number ‘1409’, and the goldsmith’s mark and a French mark on verso. Numbered from the edition of 20 on verso.

Pablo Picasso Faun’s Face (Visage de faune), c.1970s is fully documented and referenced in the below catalogue raisonnés and texts (copies will be enclosed as added documentation with the invoices that will accompany the sale of the work).