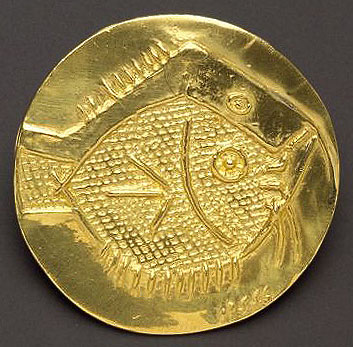 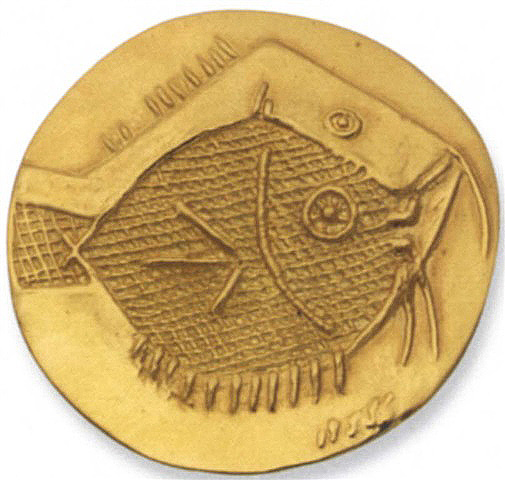 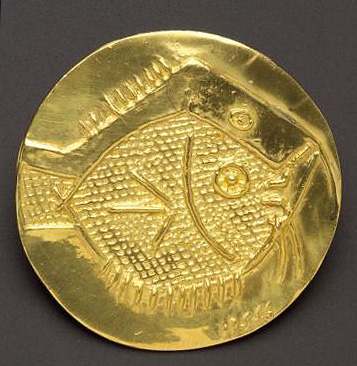 Picasso’s fascination with exploring new mediums leads us to his representation of a favorite motif: a fish resting within another fish. The subject is seen in his ceramic works such as, “Grand Poisson (Big Fish), 1956” but it is in the gold medium where the delicacy and intricacy of the two fish come alive. The line work is beautiful and the whimsy is wonderfully expressed in this rare medium.

Originally commissioned by Picasso as part of the artist’s private collection in 1967, this medallion was forged by Francois-Victor Hugo in the late 70’s. Notable due to its rarity and lack of availability, this 23K gold pendant is stamped with the Picasso stamp signature on verso and numbered from the edition of 20 on verso.

Provenance:
This particular medallion Picasso kept for himself and came directly from his daughter.

About Francois-Victor Hugo and Pablo Picasso’s Medallions:
In the 1950's and 1960's, Picasso commissioned Francois Victor-Hugo, one of the most accomplished goldsmiths working in France at the time, to execute a series of platters, dishes and medallions in gold and silver after original models he had designed. These platters and medallions were individually selected, designed, seen, approved and cherished by Picasso during his lifetime with such fervor that he never intended to sell them for profit initially.

Thus, at the start, their existence was wrapped in secrecy. Picasso re­fused to loan any of them to galleries and museums and concealed them from visi­tors to his home, choosing instead to keep them as a private treasure. However Picasso gave in to Hugo’s persistence and in 1967, he authorized Hugo to make a small, 'numbered edition’ of each for sale. They were not sold publicly but rather dispatched to their respective buyers and so they attracted almost no publicity, making them quite rare. Working together for the next ten years, Picasso and Hugo created nineteen gold medallions and in each set there were twenty complete sets made plus two reserved for the artist, each set consisting of nineteen gold medallions.

Catalogue Raisonné & COA:
A Certificate of Authenticity will accompany this work.