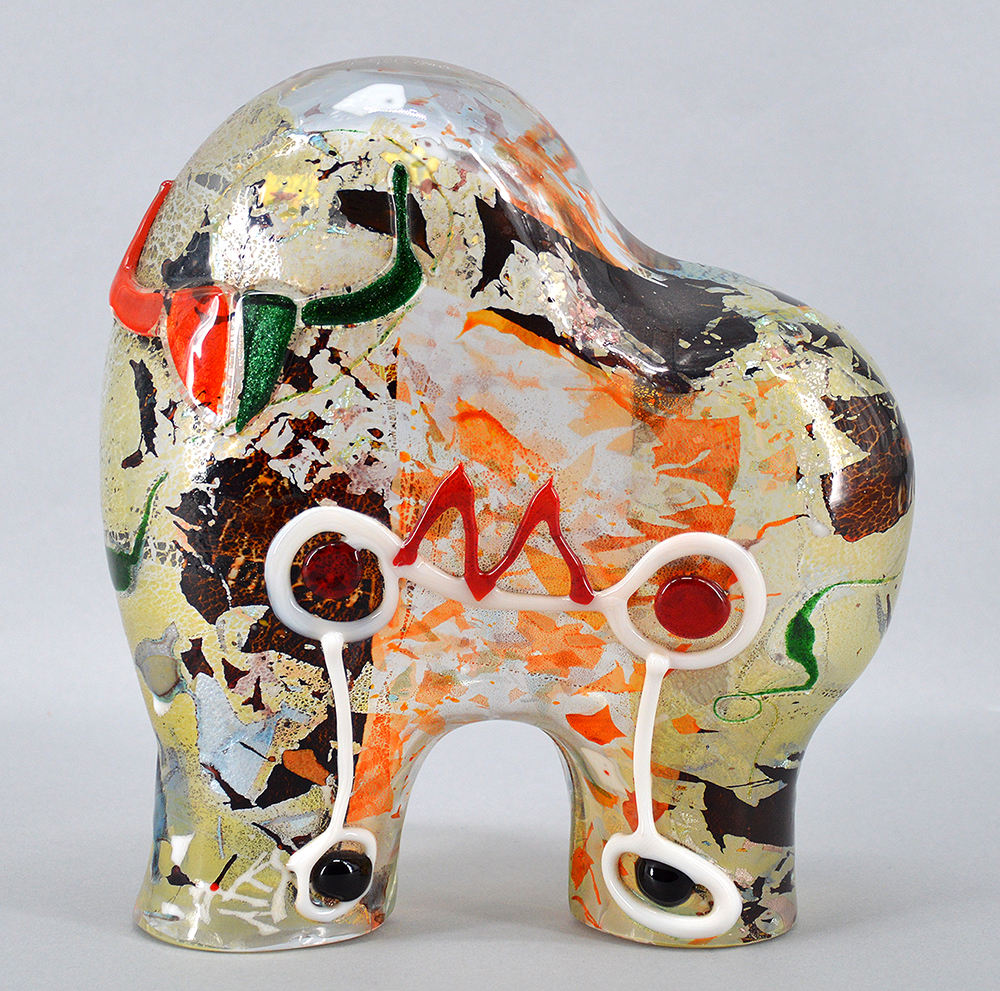 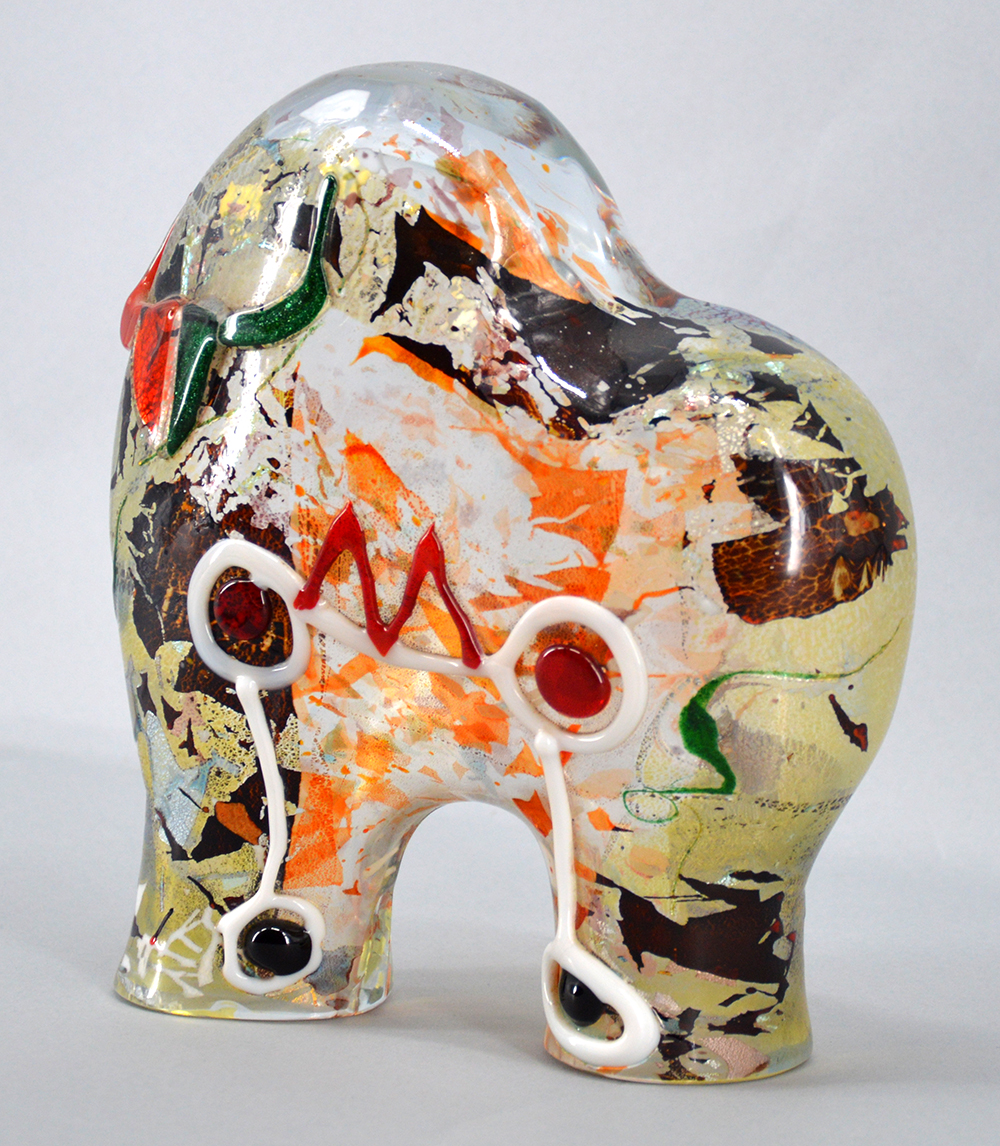 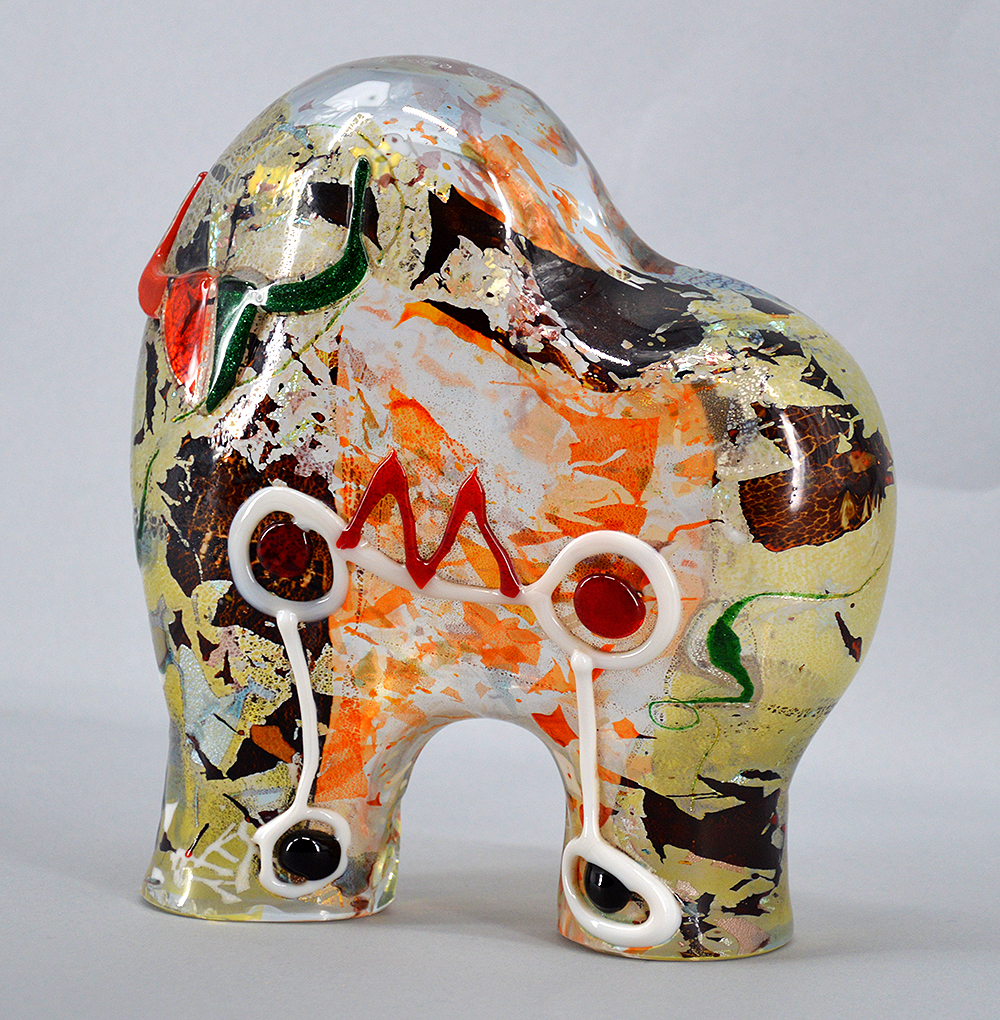 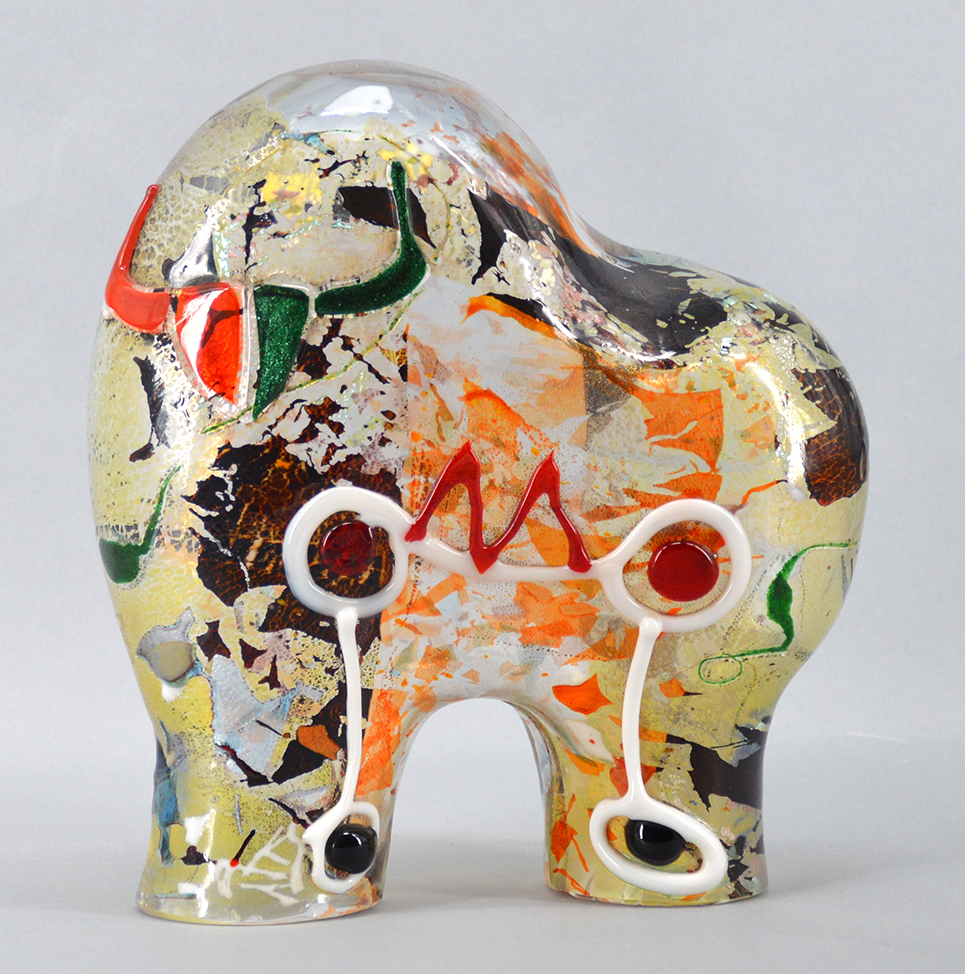 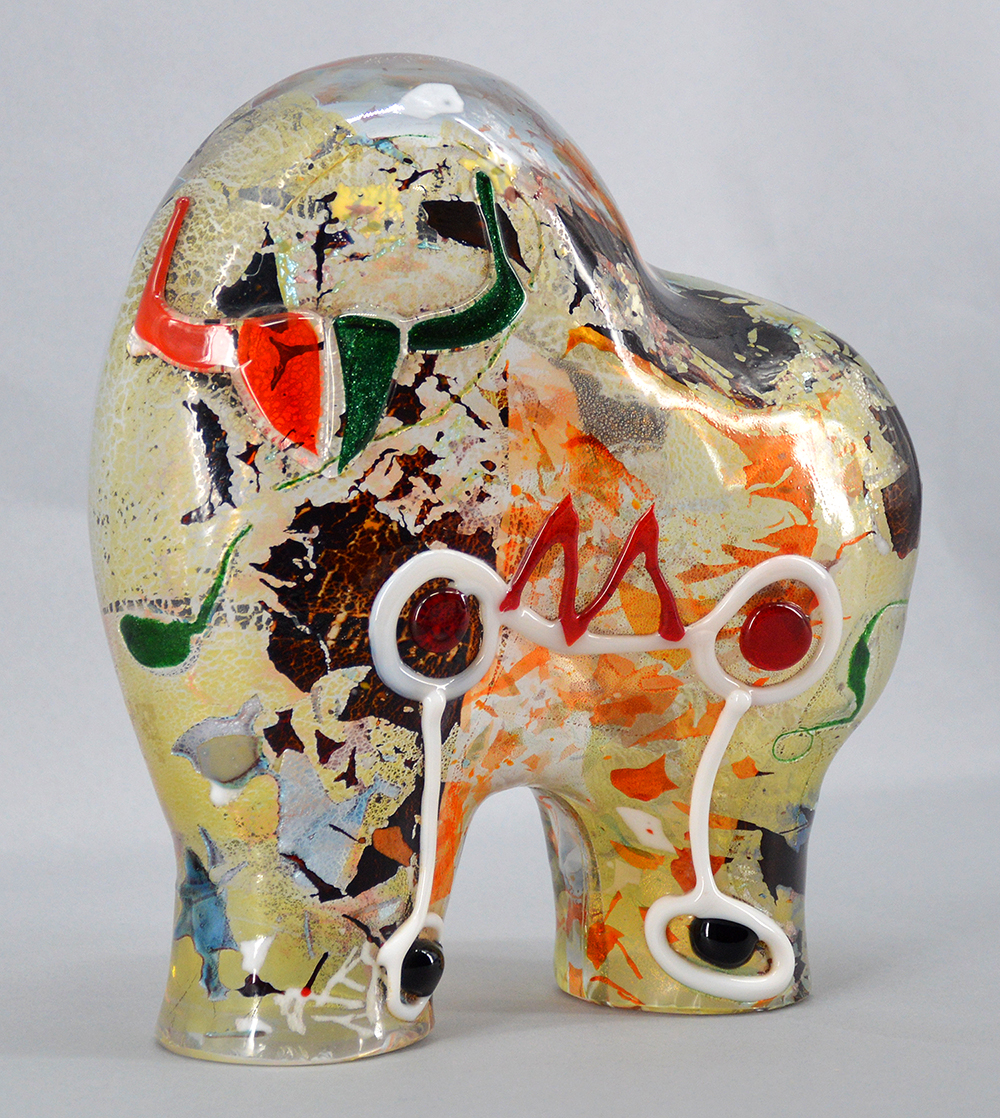 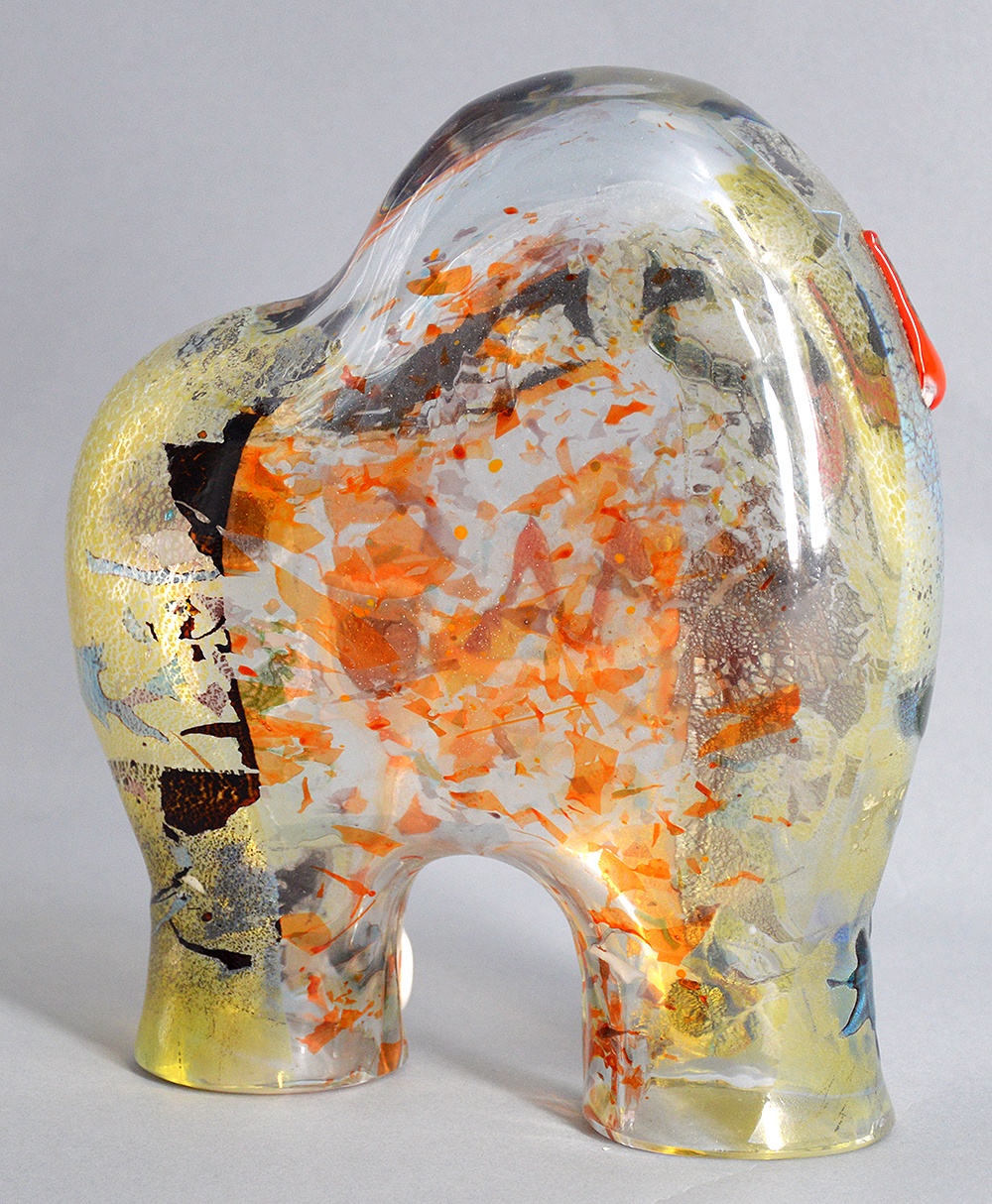 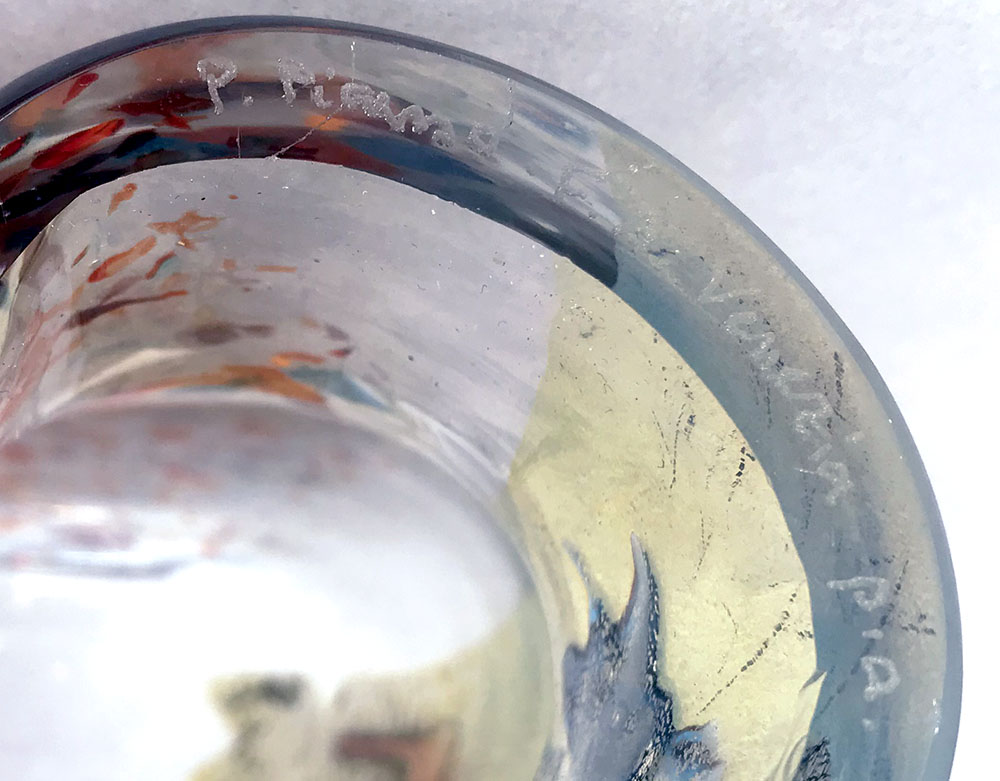 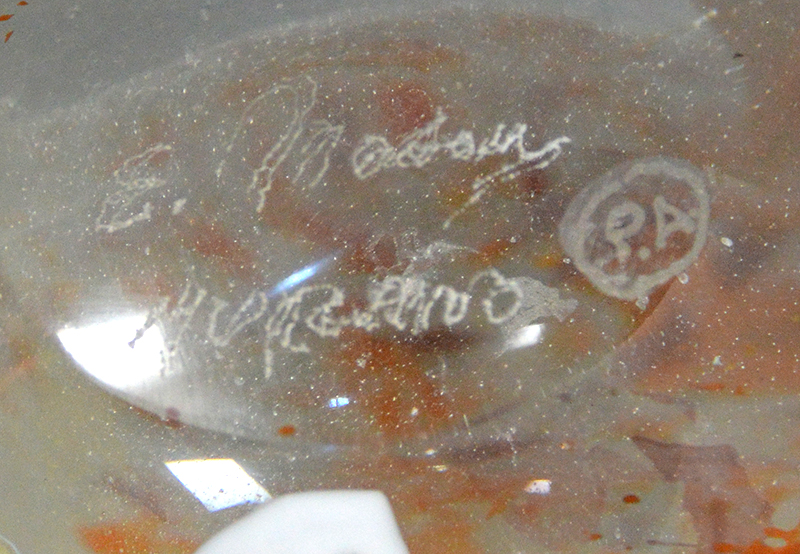 Picasso Murano colored glass sculpture, Untitled, c. 1958 is a colorful and striking rendition of one of the Spanish artist’s most sought after themes, the bull. Featuring a vibrant palette of fiery reds, emerald green, white, and browns over a base of transparent glass, the details are what make this Picasso sculpture so enticing. Displaying an array of surface variation, different textures, patterns, and pigments in varying opacity adorn the richly decorated glass which is best viewed in person. While Picasso created many images of the bull over his lifetime, his diversity in style and medium has made his artistic output delightfully eclectic. One of the artist’s most controversial and memorable renditions is the 1942 sculpture, composed of an actual bicycle seat and handlebars, Bull’s Head, also known as Bicycle Seat. While this glass sculpture is undeniably different in presentation, execution, and technique from the Bull's Head, 1942, Picasso’s sense of whimsy is ever-present.

Created c. 1958 in the Fucina degli Angeli in Italy, this Murano glass sculpture was realized by master glass artist Ermanno Nason (Murano, 1928- ) in collaboration with Pablo Picasso (Malaga, 1881 – Mougins, 1973). An artist proof aside from the edition of three known examples, this work is inscribed on the top: ‘E. Nason Murano PA’ and on the bottom: ‘P. Picasso F.A. Venezia P.A.’

Picasso's Glass Art:
Picasso's relationship with Egidio Costantini echoes his partnership with the Madoura Pottery in Vallauris, France. The two men initially met in Vallauris in 1954, though their working relationship would begin a few years later, due in part to Peggy Guggenheim's invitation for Picasso to come to Venice. While Suzanne and Georges Ramié created large editions based on original prototypes created by Picasso, Costantini translated the artist's drawings into glass sculptures produced in very limited editions. This master of La Fucina degli Angeli (the Forge of the Angels), Murano, transformed the centuries-old tradition of Italian glass blowing into a modern art. A 1965 exhibition at the Museum of Modern Art, New York, recognized the importance of these rare sculptures, which are housed in the Peggy Guggenheim Collection, amongst other notable collections.

Catalogue Raisonné & COA:
Pablo Picasso Murano colored glass sculpture Untitled, c. 1958 is fully documented and referenced in the below catalogue raisonnés and texts (copies will be enclosed as added documentation with the invoices that will accompany the sale of the work).
1, Egidio Costantini: Il Maestro dei Maestri. Brussels: Espace Kiron and Espace Medicis, 1990. A similar version is listed on page 170 and illustrated on page 171
2. A Certificate of Authenticity will accompany this artwork.