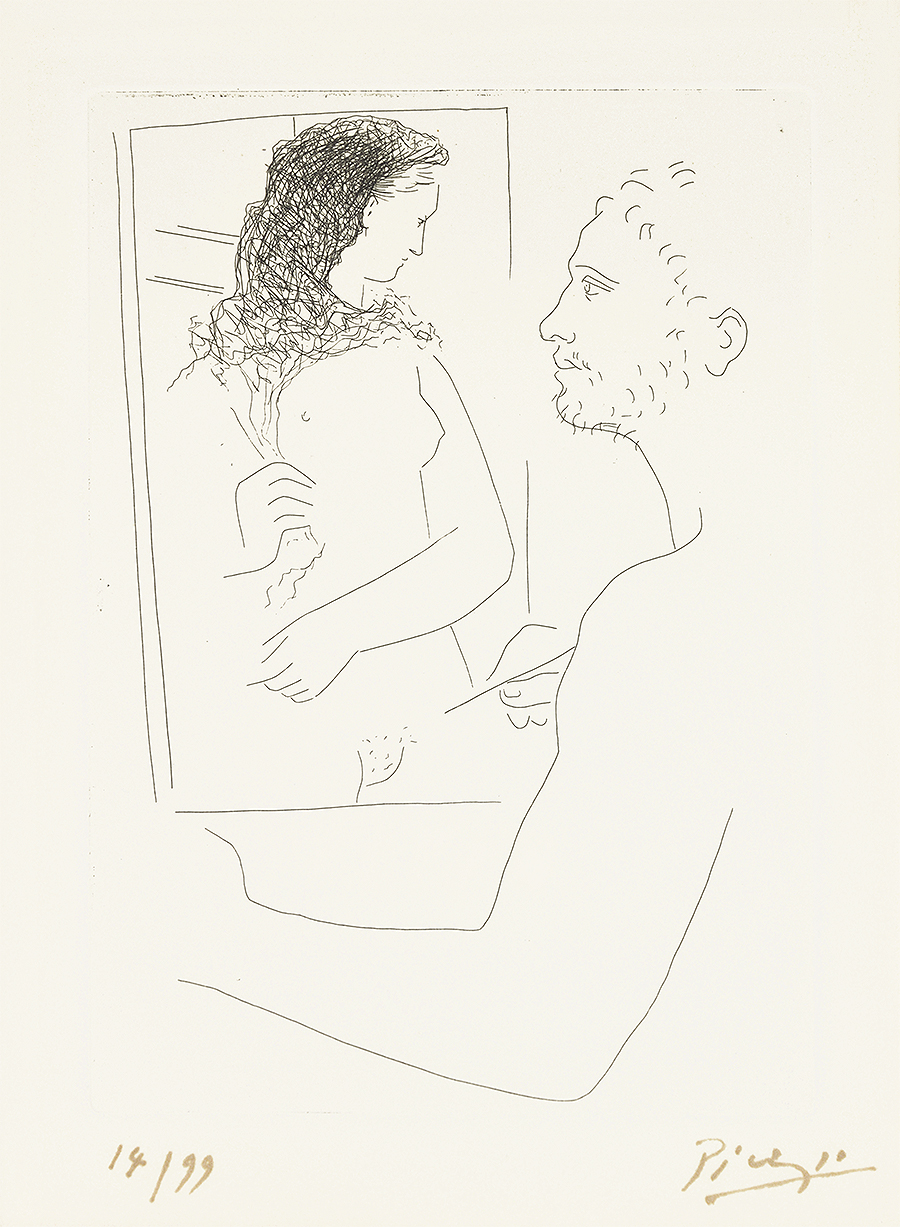 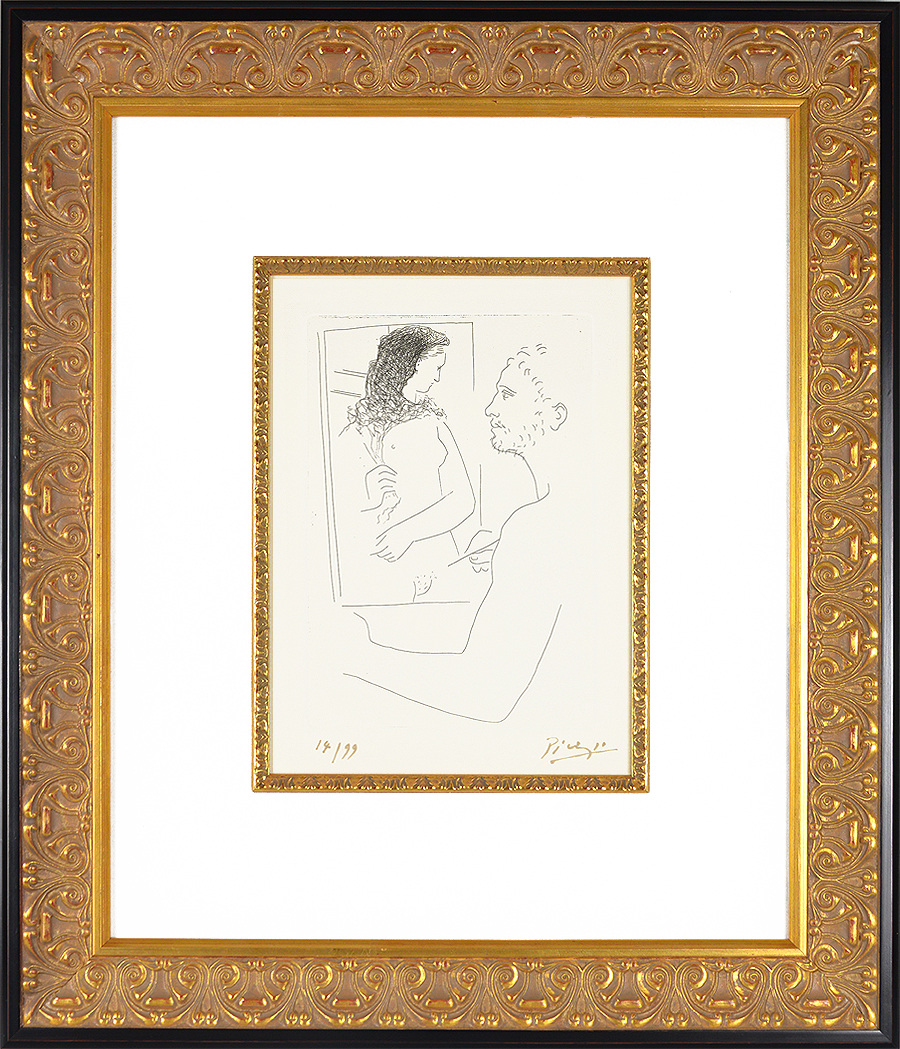 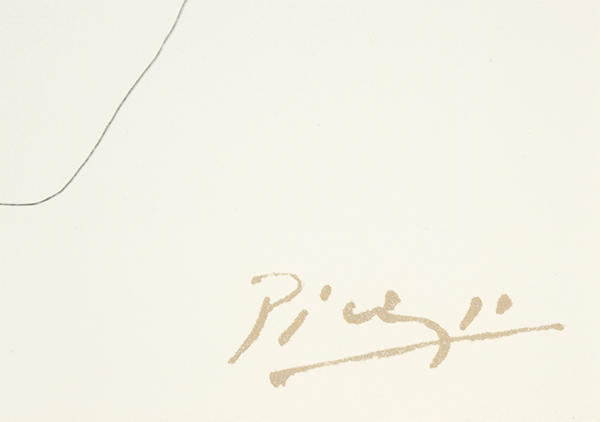 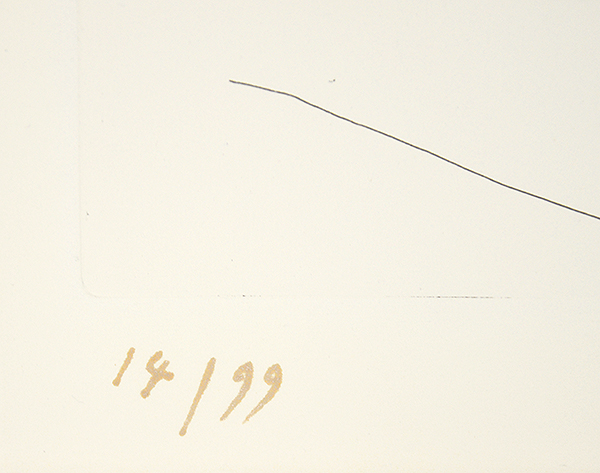 Pablo Picasso Peintre Devant Son Tableau (Painter Before His Easel) from Le Chef-d’œuvre Inconnu, 1927 showcases an interesting scene of a painter lovingly gazing at the woman he is drawing. Initially looking at this work, there is a quizzical component to it. We see the artist’s profile—strong nose, disheveled hair, and soft eyes—completely smitten with his muse in front of him. Not many details are shown here other than his face and outline of his body. The most striking detail of this work is the intensity of the woman’s hair. As she diverts her attention away from the artist, she pulls at the tail ends of her hair causing a feeling of tension.

The use of line is simple and concise, where we see mostly short and straight lines. Unlike the woman’s hair, composed of intense and short bursts of energetic scribbling, the rest of Picasso’s linework is clean and almost rigid. The stylistic references here remind us of the neoclassical style. Curly hair, firm bodily figures, and precise contours revisit his Neoclassical and Surrealist periods. Although the nude figure was an artistic choice Picasso glorified in many of his works, he is able to demonstrate his own playful rendition of such an iconic imagery.

Created in 1927, Pablo Picasso Peintre Devant Son Tableau (Painter Before His Easel) from Le Chef-d’œuvre Inconnu, 1927  is an etching on wove paper hand signed by Pablo Picasso (Malaga, 1881 – Mougins, 1973) in ink in the lower right margin and numbered from the edition of 99 in brown ink in the lower left; published by Ambroise Vollard, Paris.

Catalogue Raisonné & COA:
Pablo Picasso Peintre Devant Son Tableau (Painter Before His Easel) from Le Chef-d’œuvre Inconnu, 1927 is fully documented and referenced in the below catalogue raisonnés and texts (copies will be enclosed as added documentation with the invoices that will accompany the final sale of the work):

About the Framing:
Framed to museum-grade, conservation standards, Pablo Picasso Peintre Devant Son Tableau (Painter Before His Easel) from Le Chef-d’œuvre Inconnu, 1927 is presented in a complementary moulding and optical grade Plexiglas.