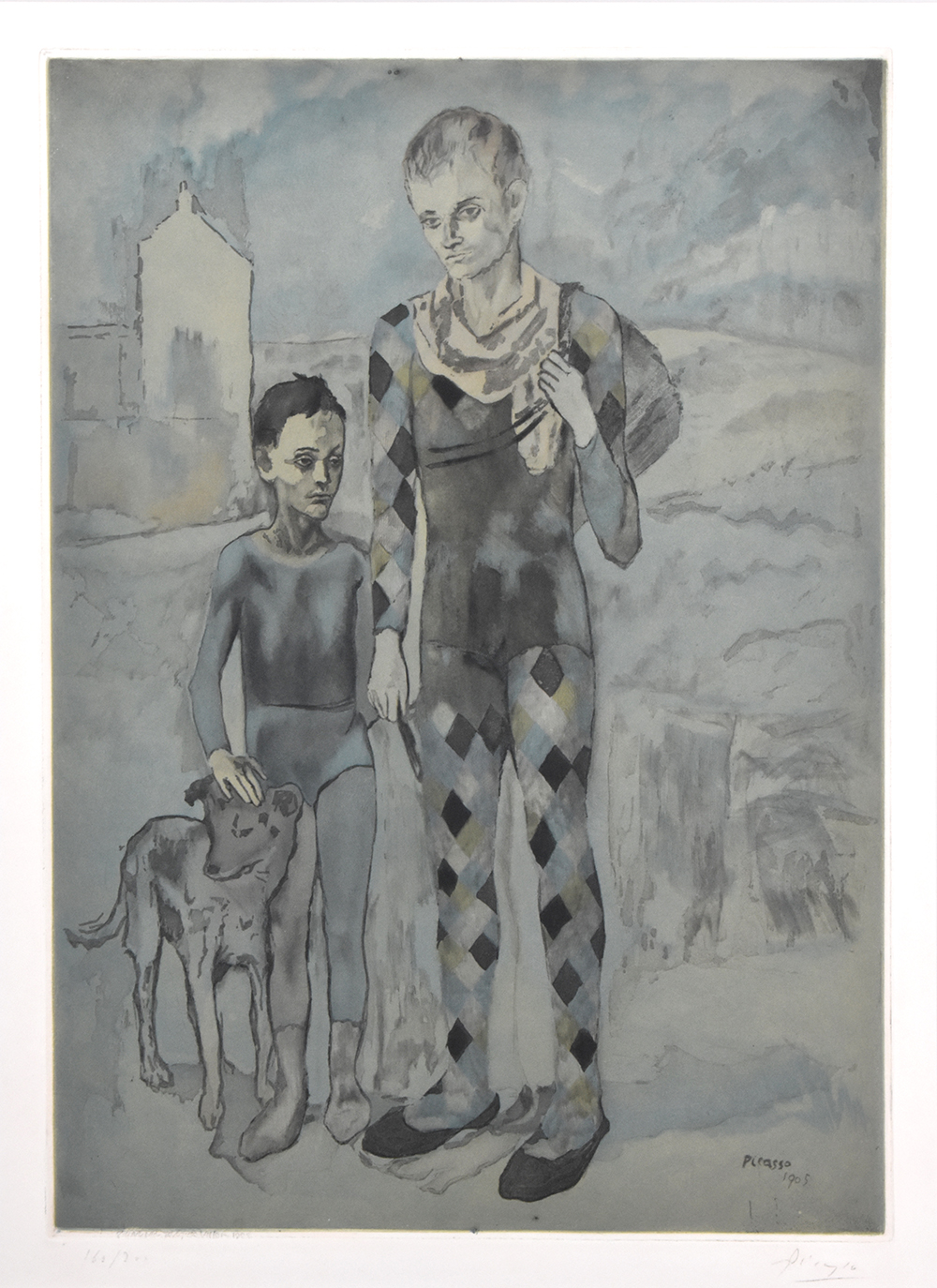 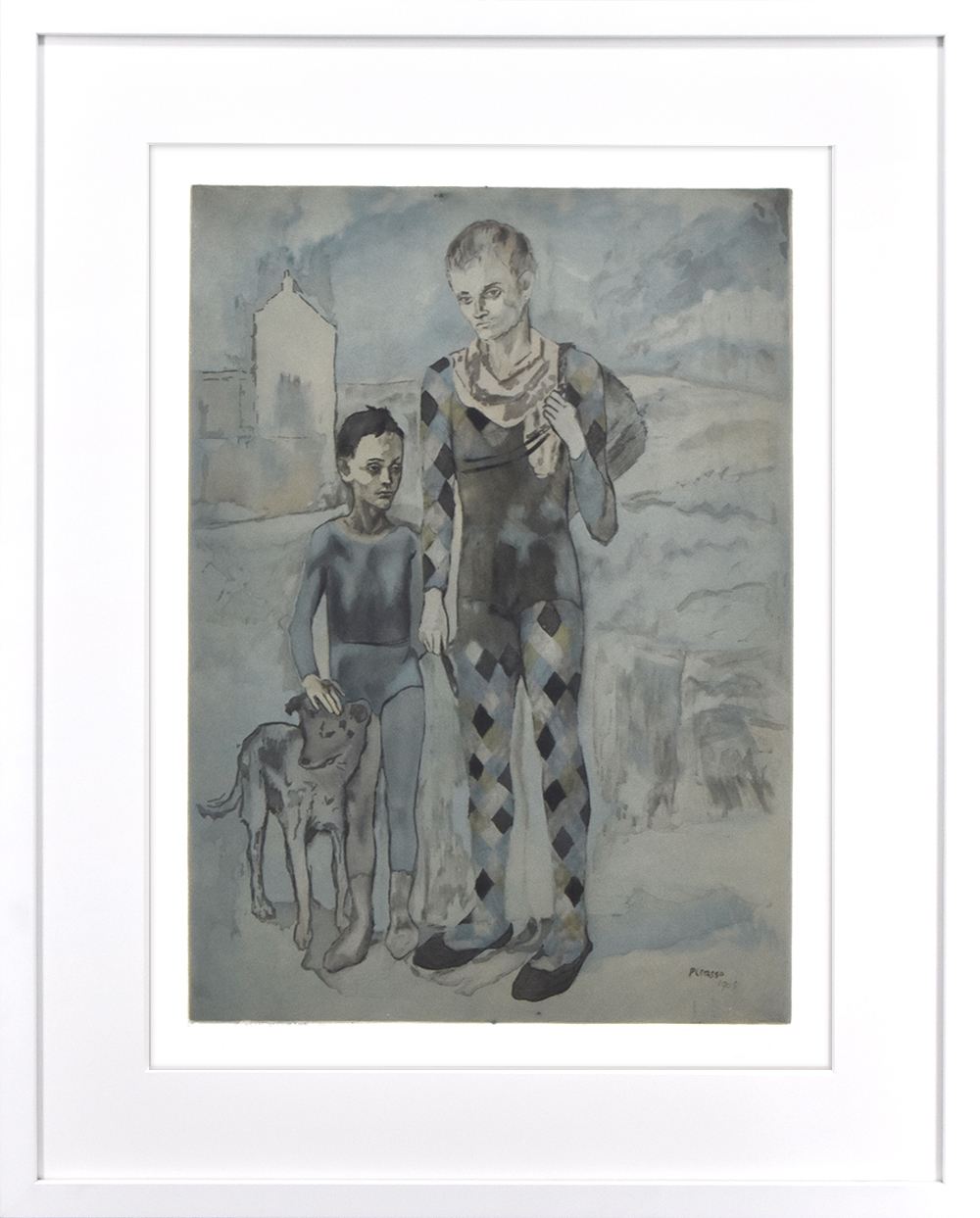 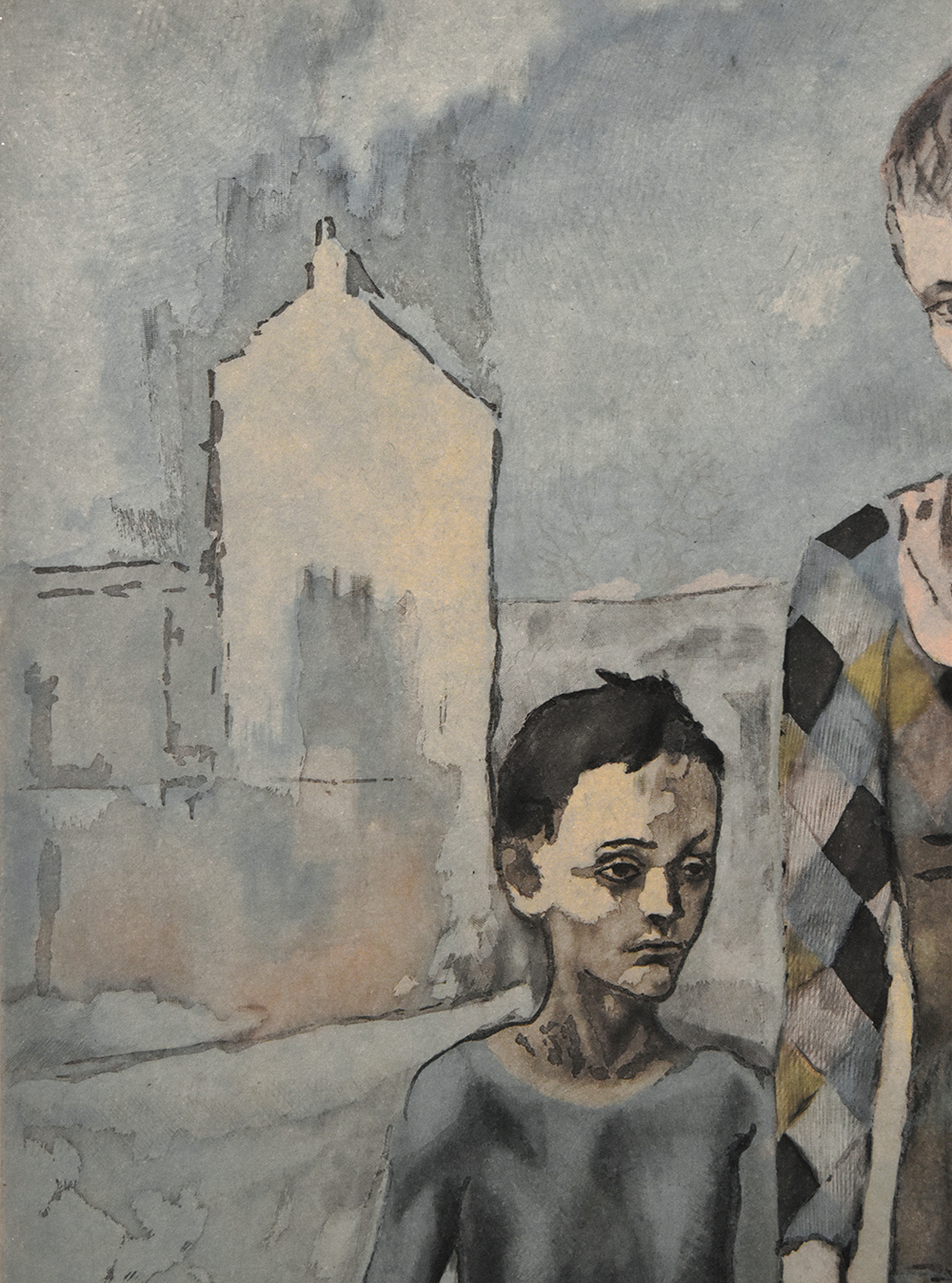 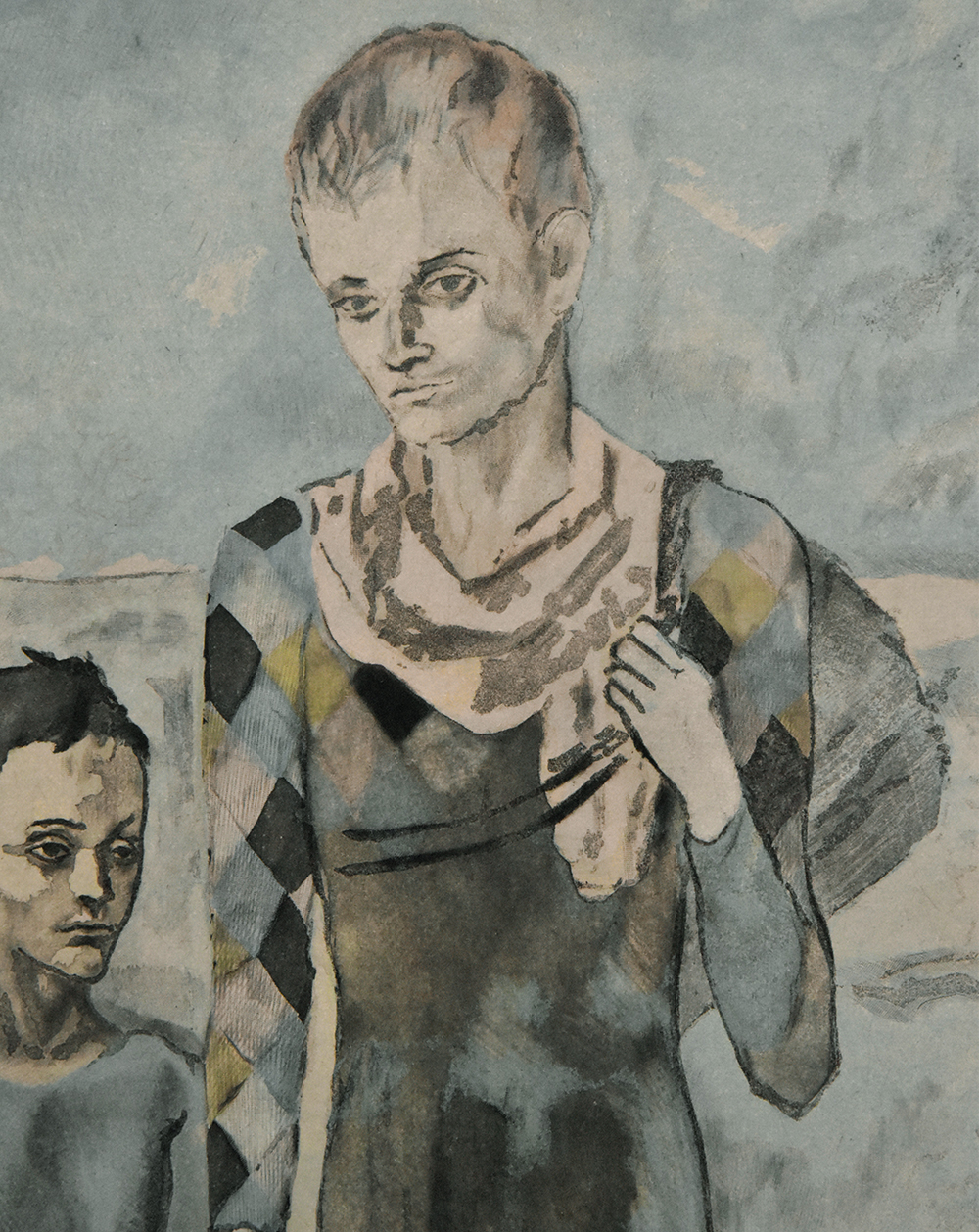 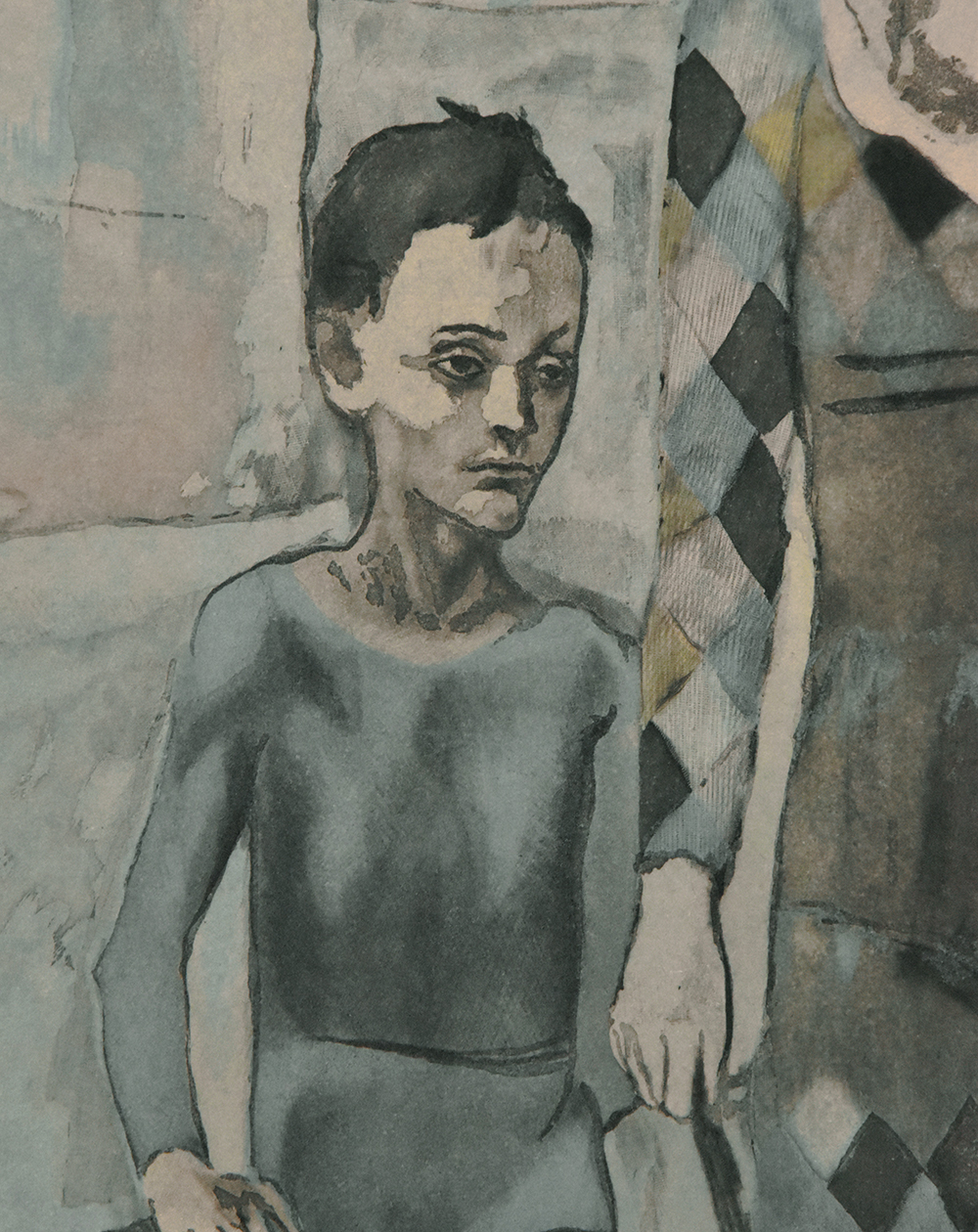 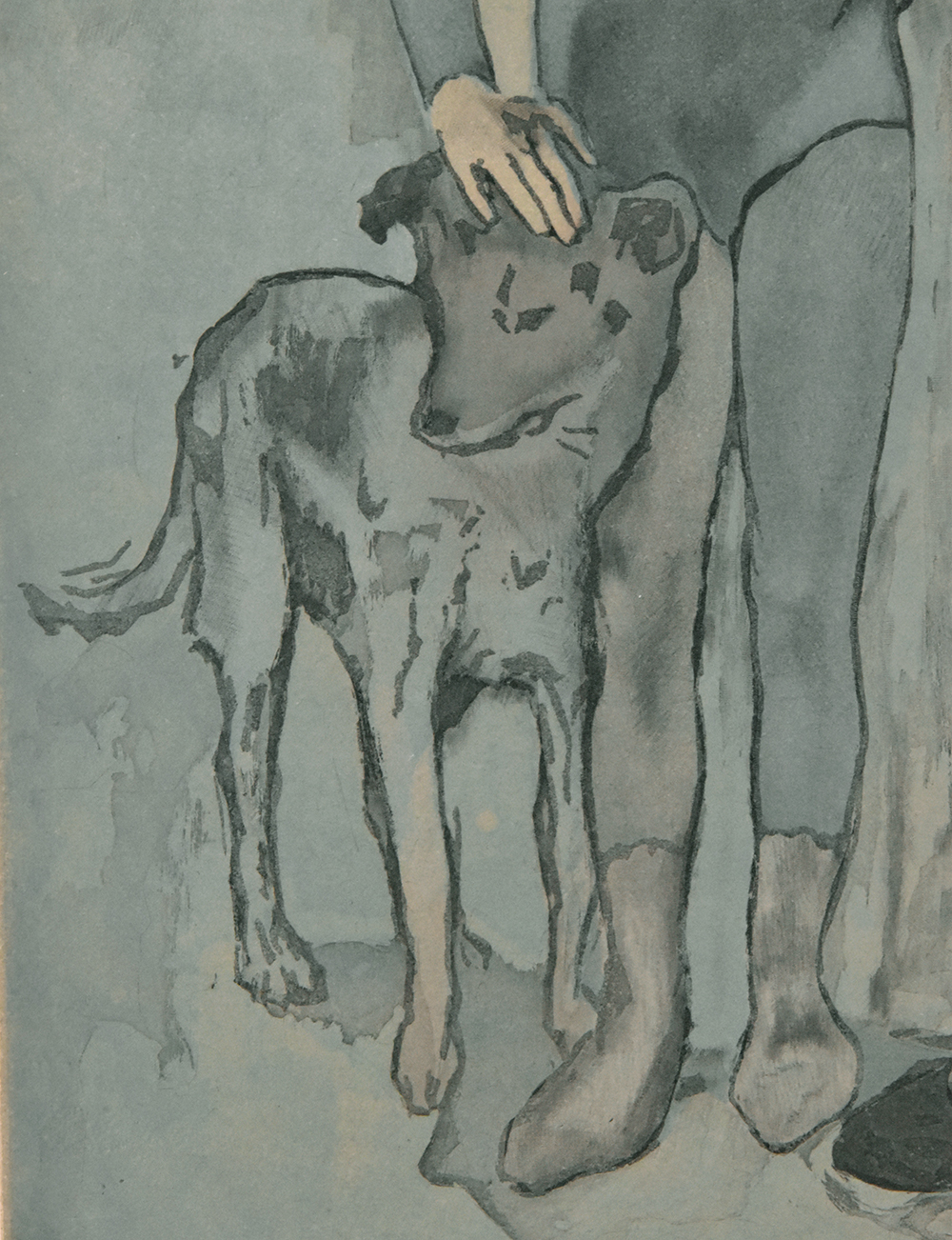 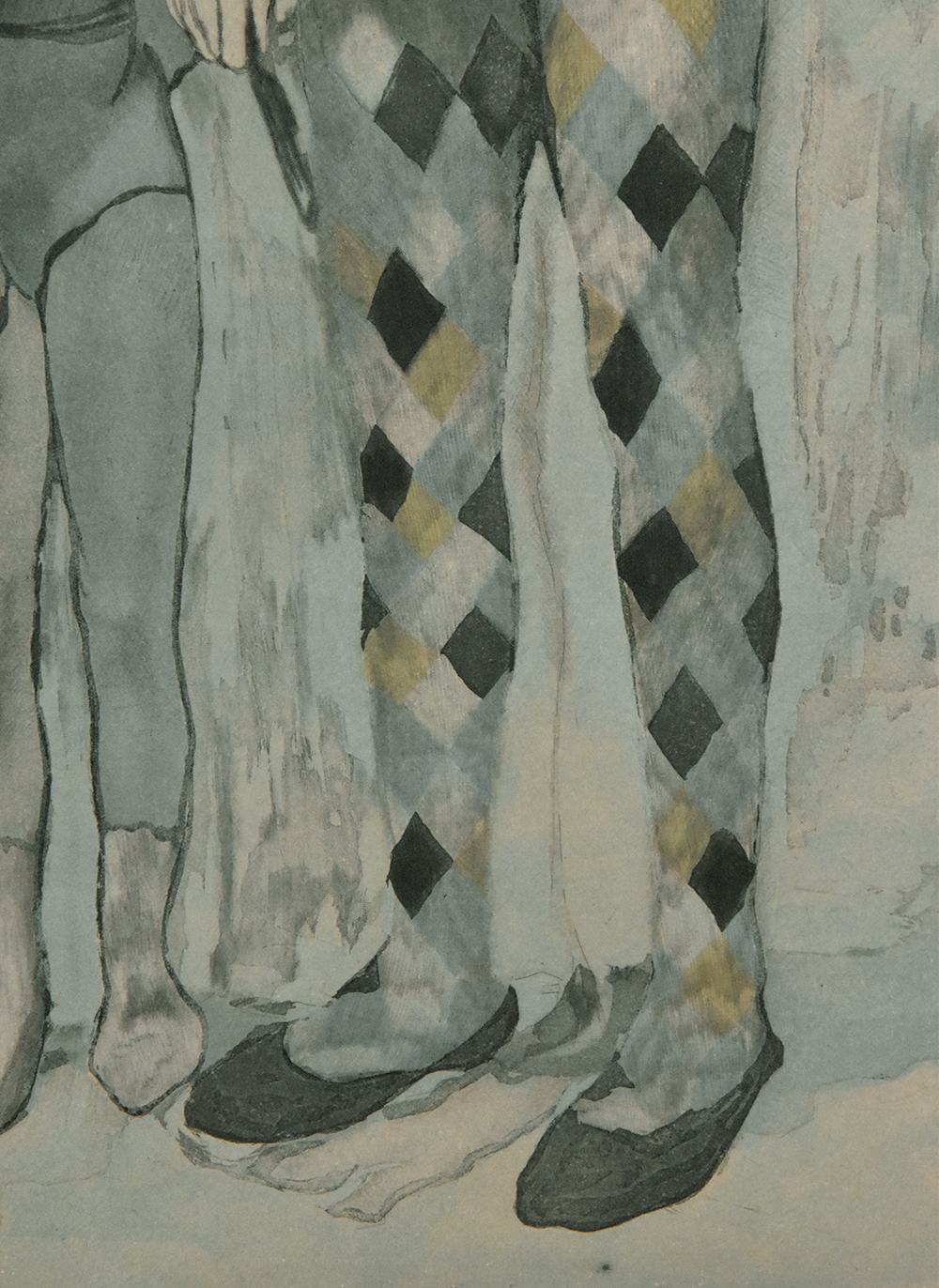 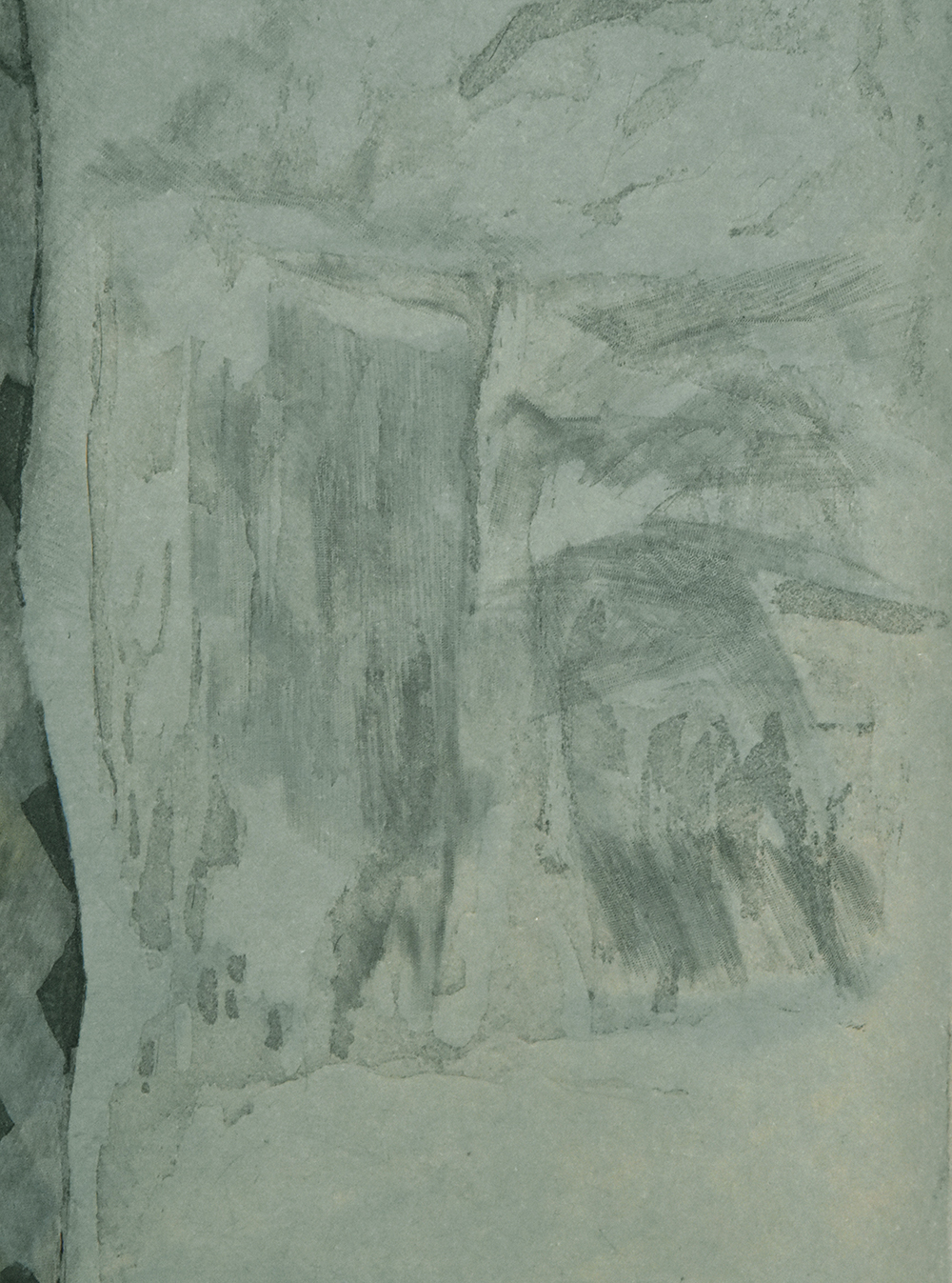 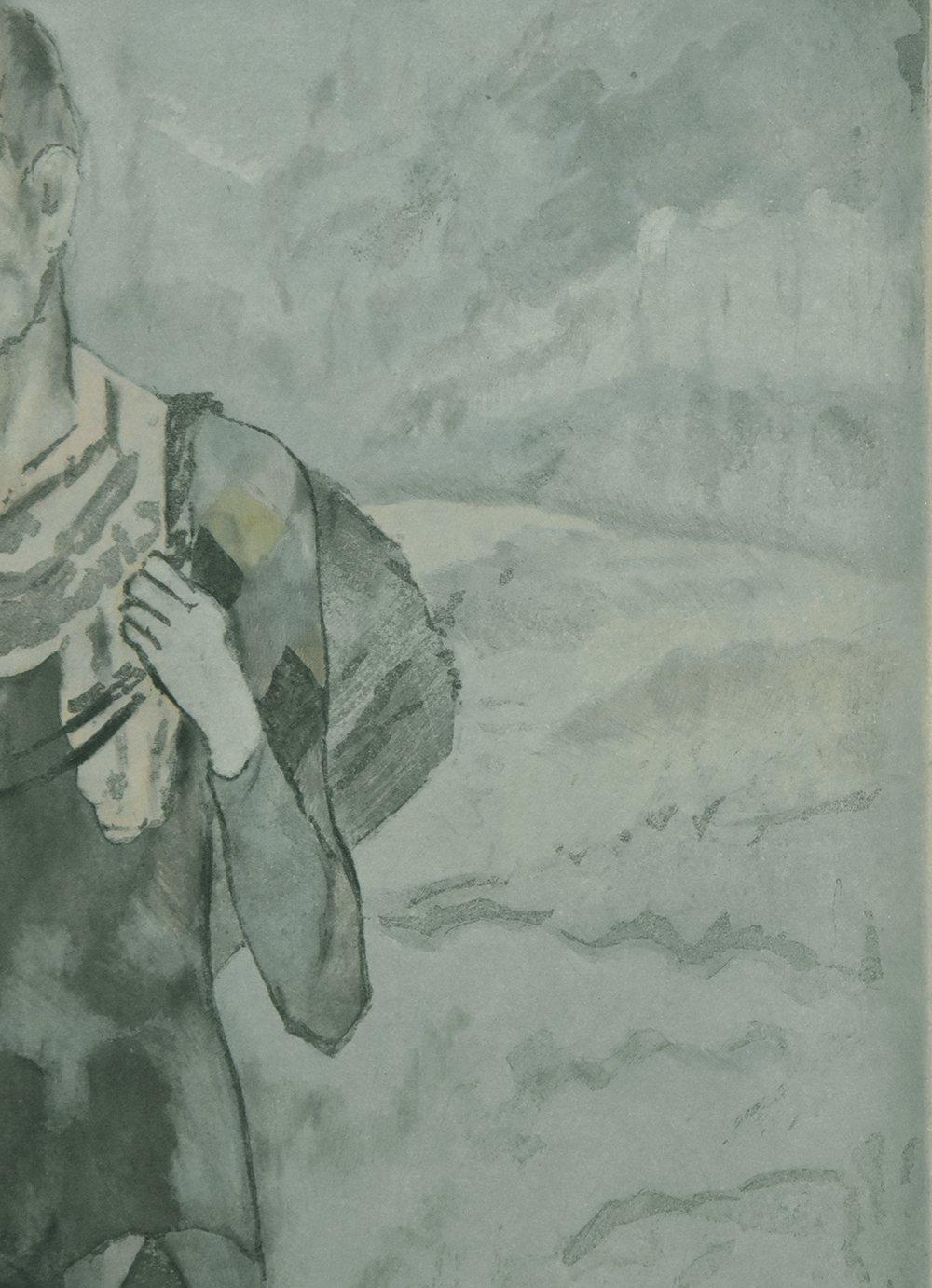 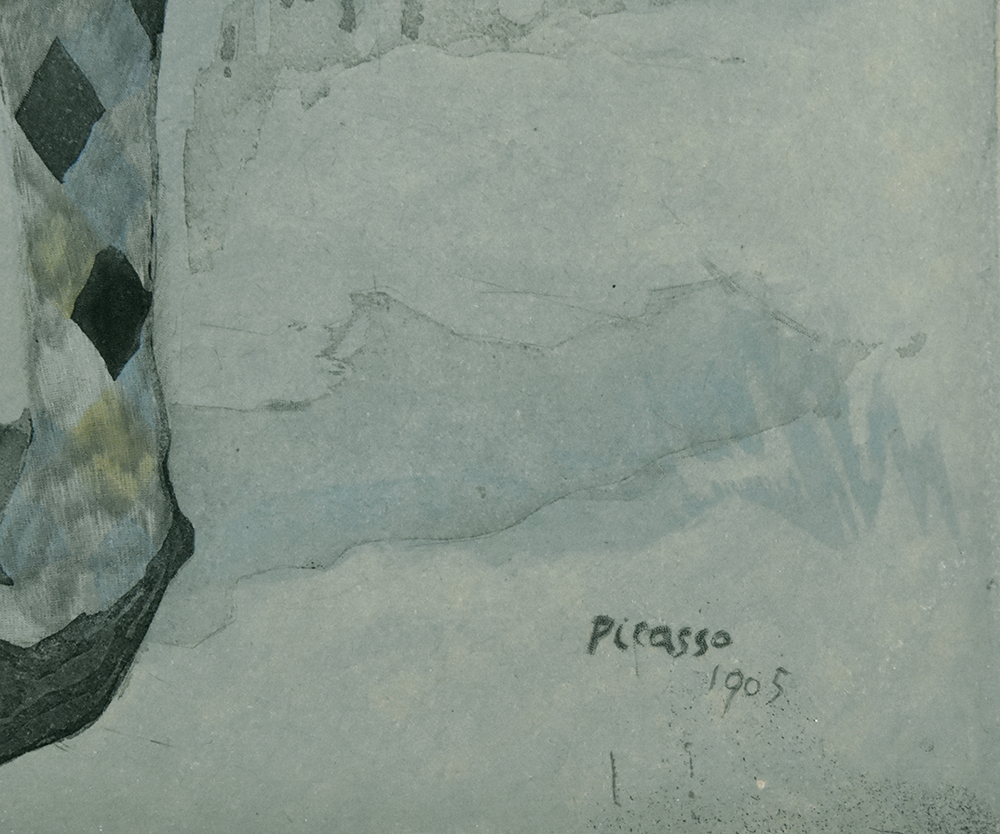 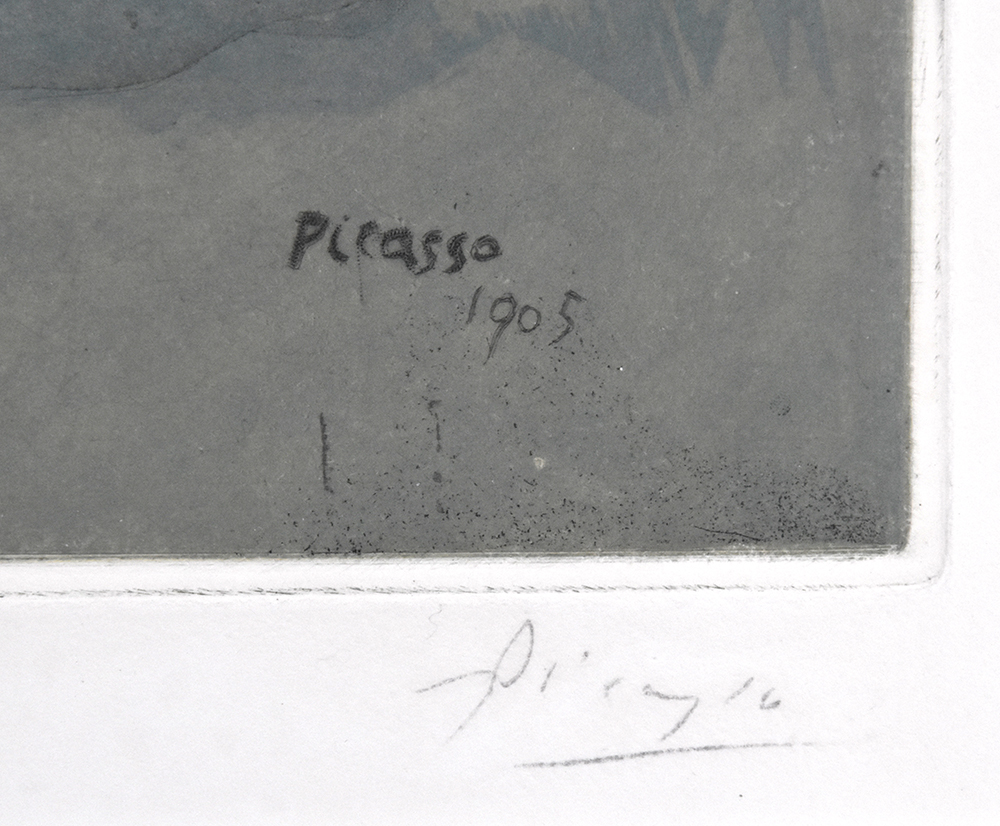 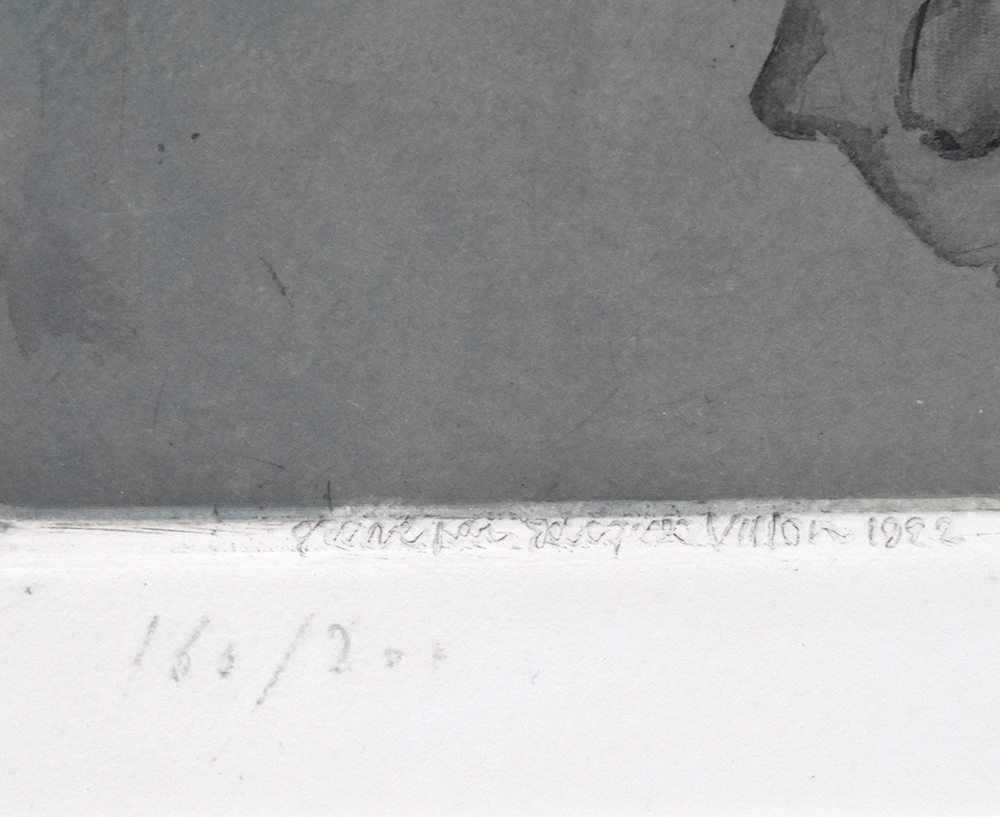 Placed against a flattened background, the two central figures in Pablo Picasso Les Saltimbanques (The Acrobats), 1922 appear as tenuous individuals with dramatic sunken eyes and far off gazes. The artist surrounds his figures with a sense of mystery placing them against a briefly described landscape comprised of a brick construction and grassy knolls. The younger figure stands with his arm behind his back, relaying a sense of discomfort and uncertainty. This younger figure pats the dog's head almost aimlessly, as if to gain a sense of reassurance in this time of incertitude. Though standing right next to each other, each saltimbanque appears lost in his old world. Their eyes do not focus on a particular object but strongly suggest that each is consumed in his own internal thought process, as if pondering his next move. The desolate background with a loosely delineated structure to the left further contributes to this feeling that the figures are isolated, both from society and perhaps from each other, suggesting that their companionship might be one based on necessity rather than true camaraderie.

Dominated by a vaporous blue tonality, this image figures into Picasso's early studies of the Harlequin figure typifying the artist's blue period. The facial sensitivity of the figures displays the artist's adept ability as a portraitist while the experimentation with tonality foreshadows the artist's later development of the cubist style.

Catalogue Raisonné & COA:
Pablo Picasso Les Saltimbanques (The Acrobats), 1922 is fully documented and referenced in the below catalogue raisonnés and texts (copies will be enclosed as added documentation with the invoices that will accompany the final sale of the work):