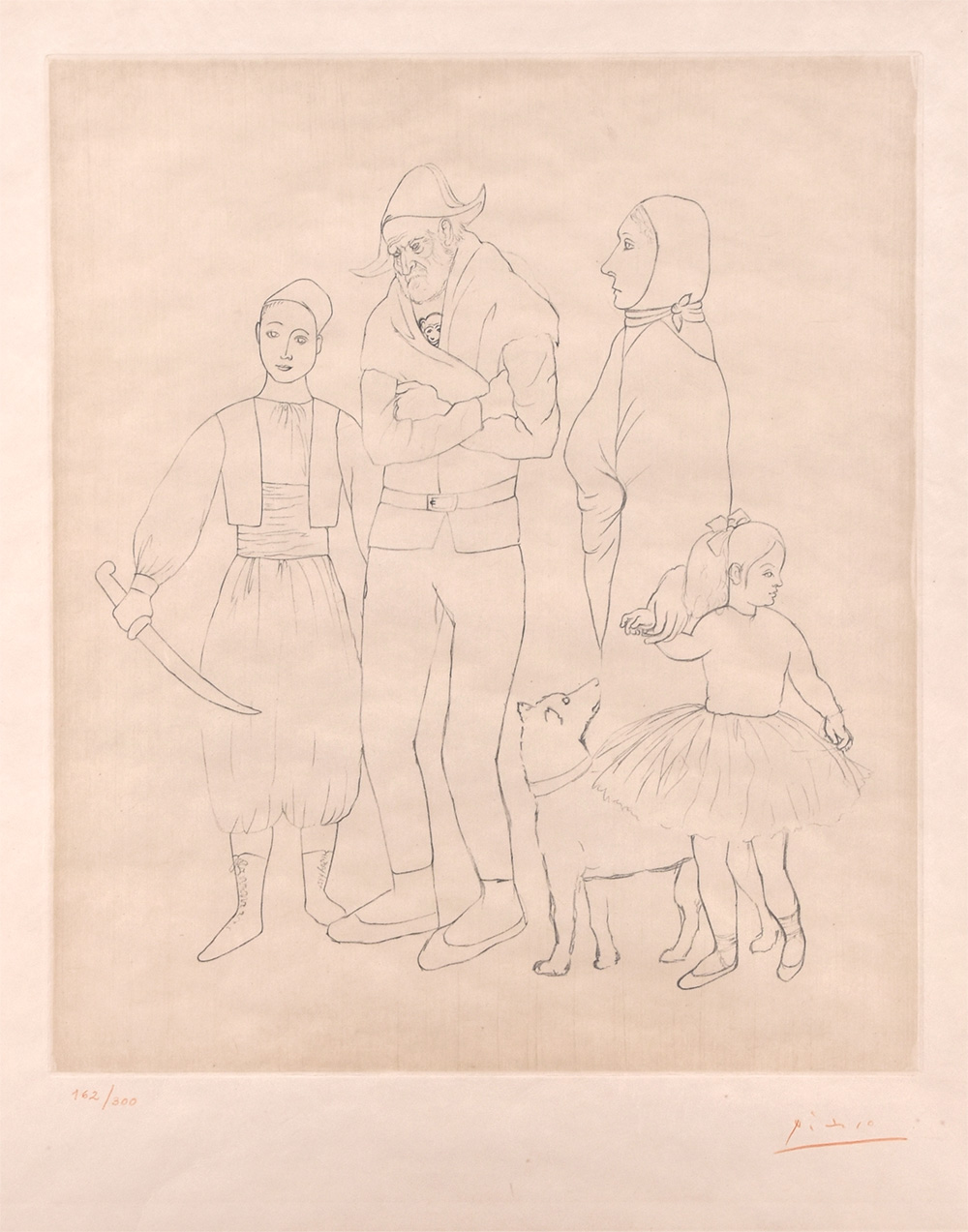 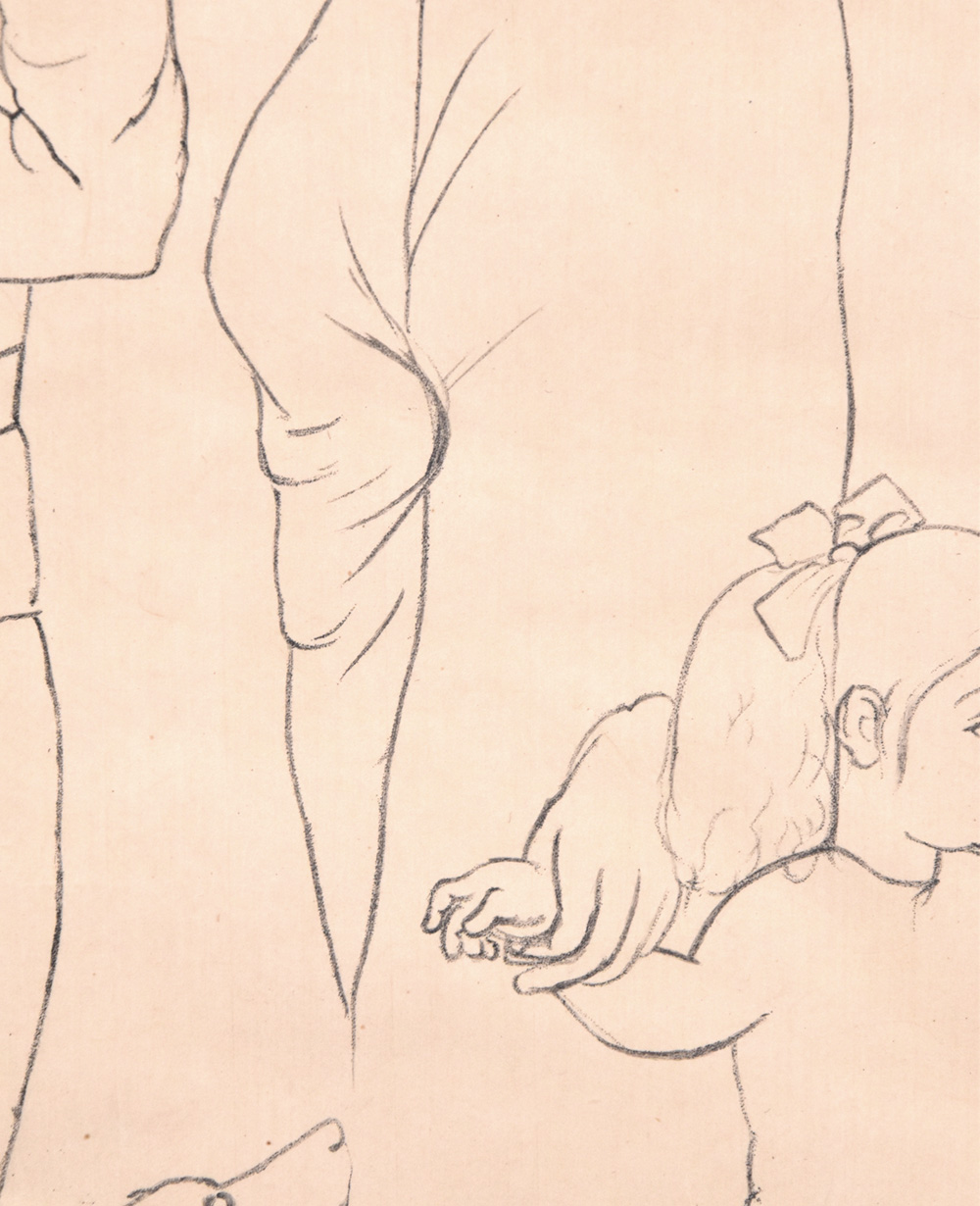 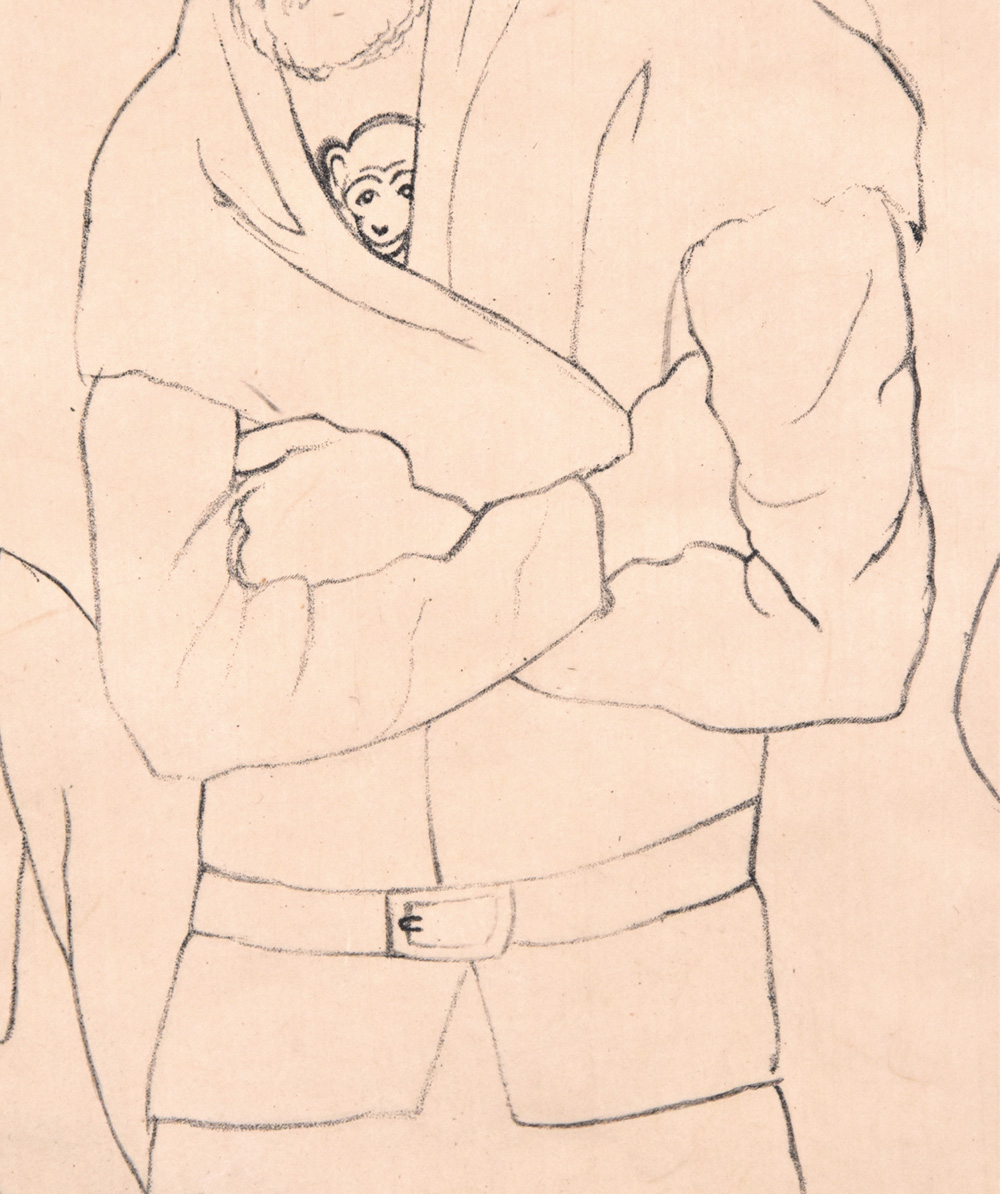 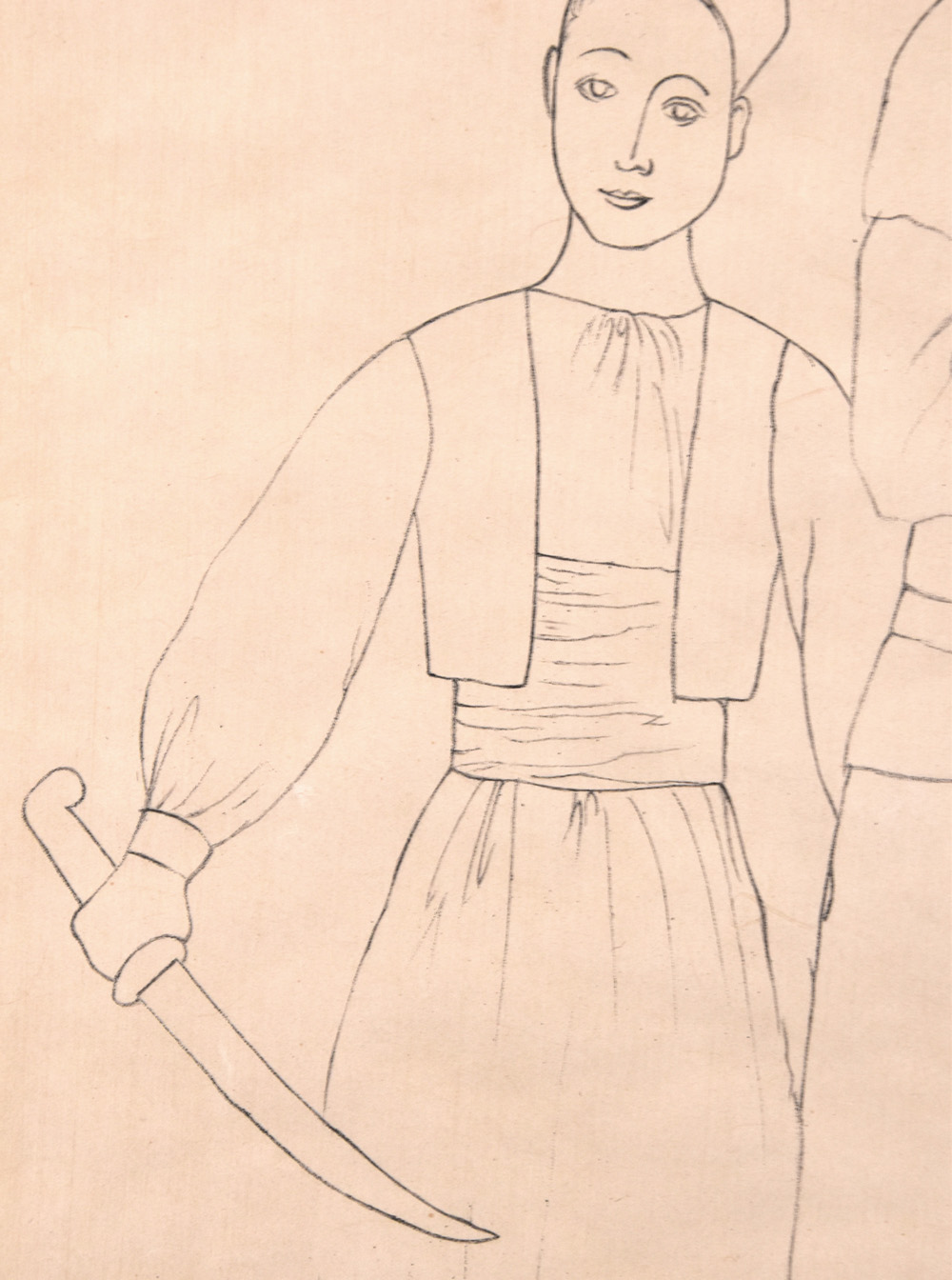 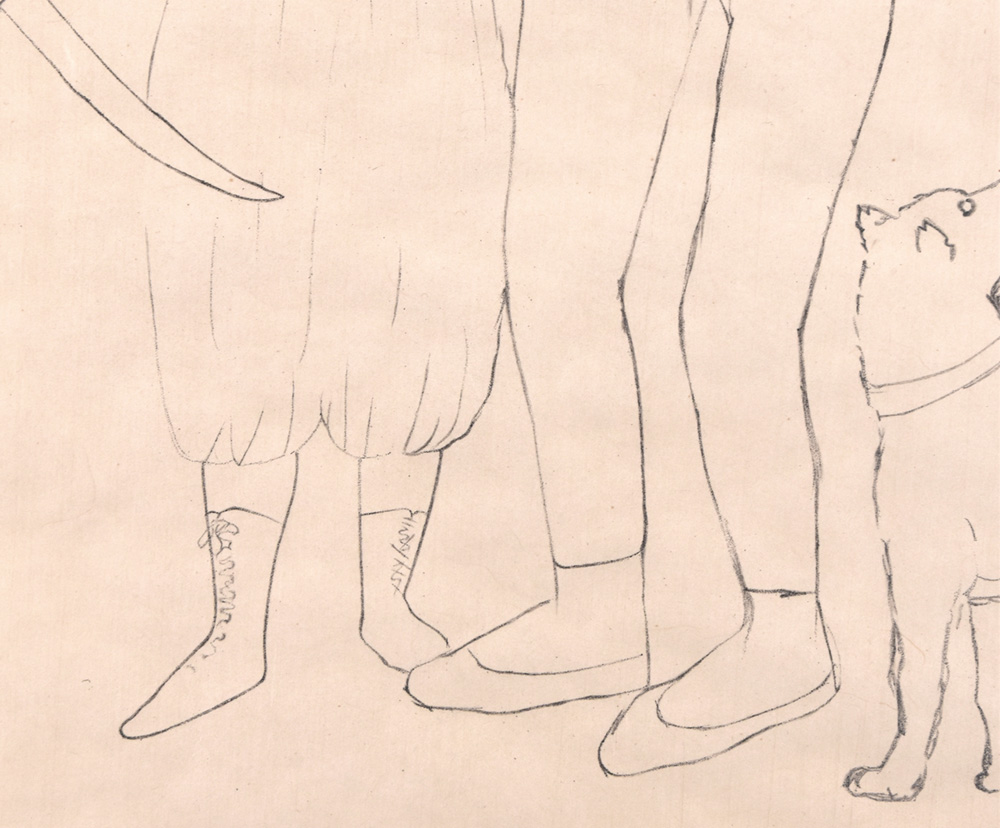 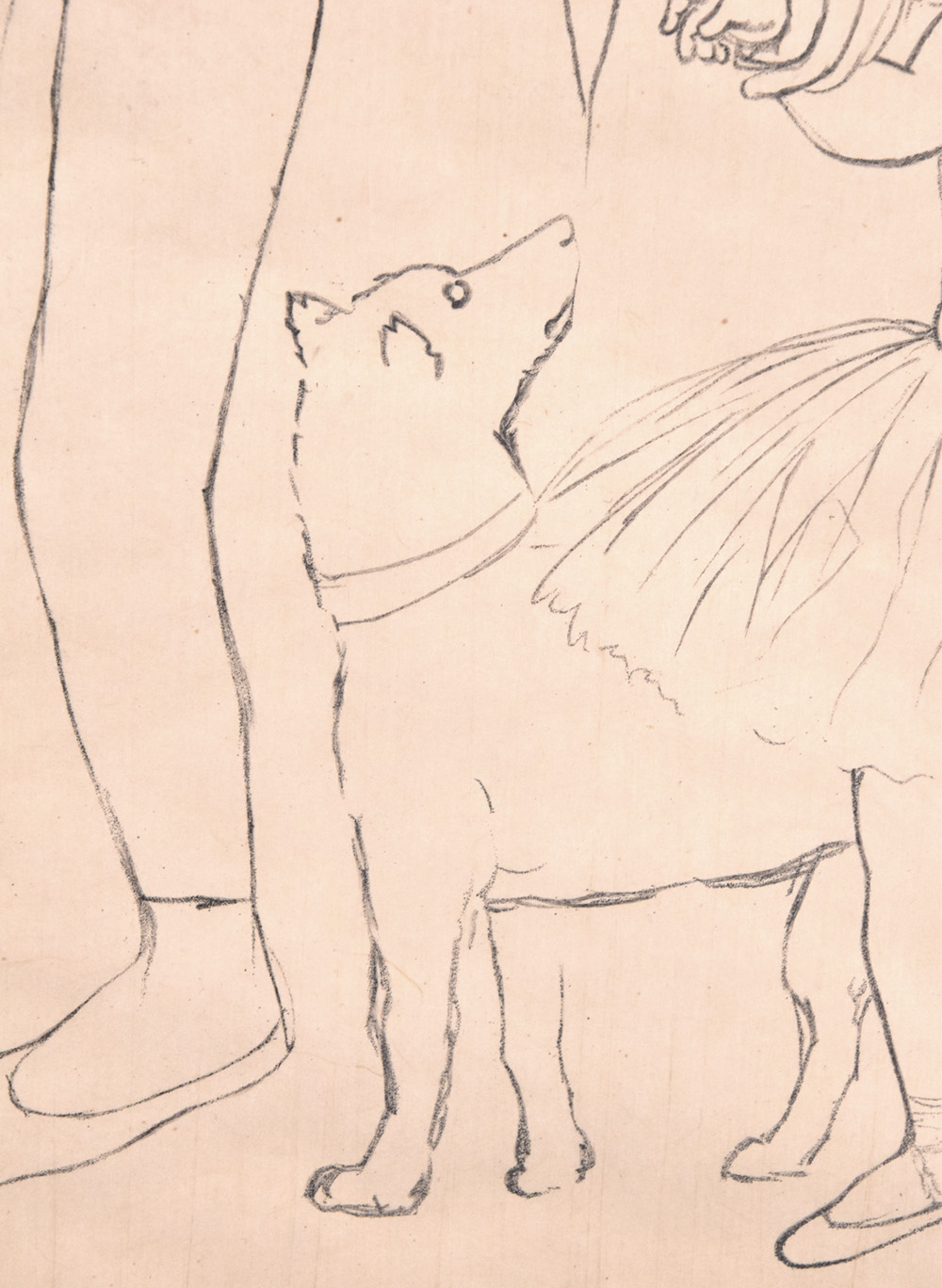 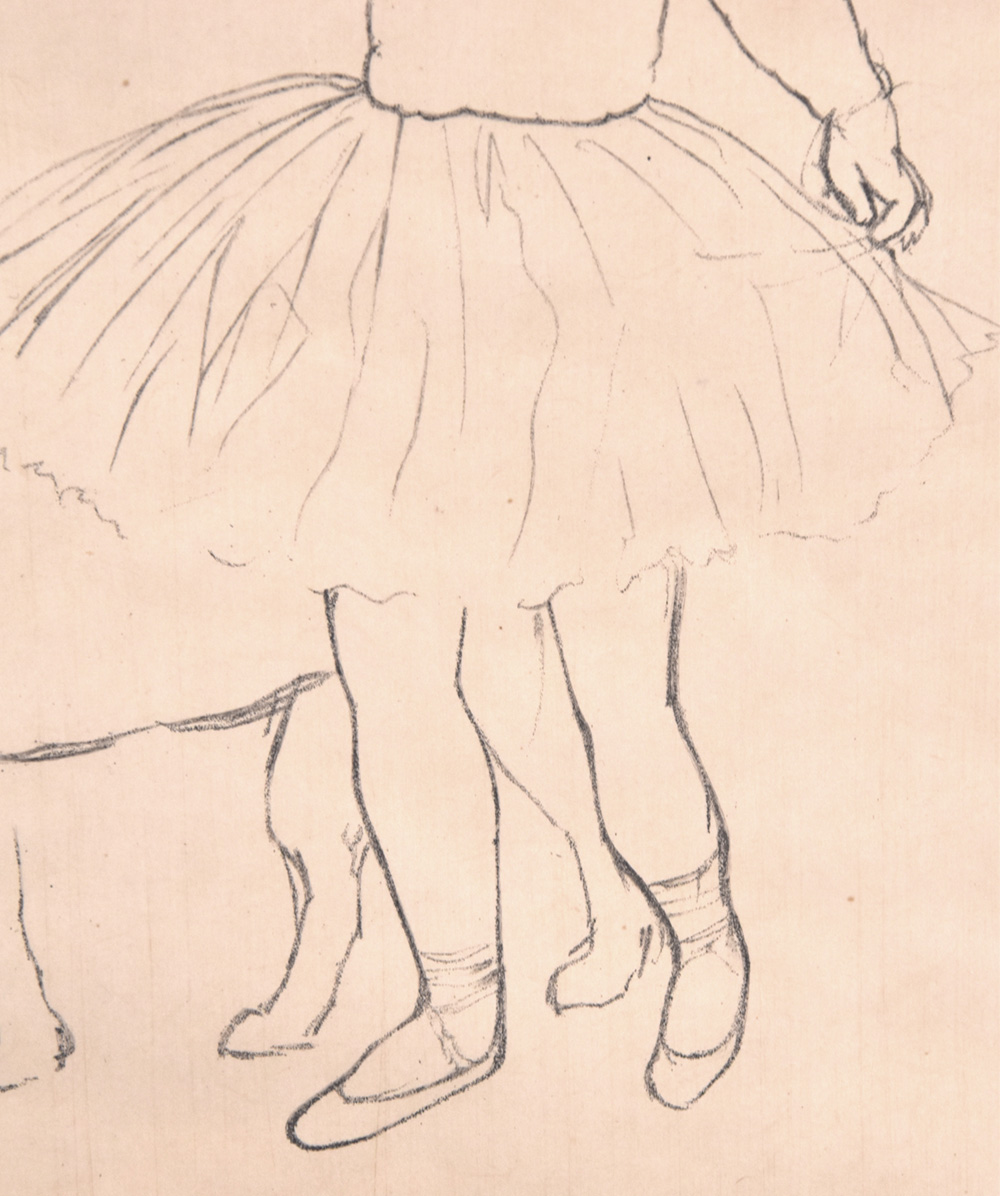 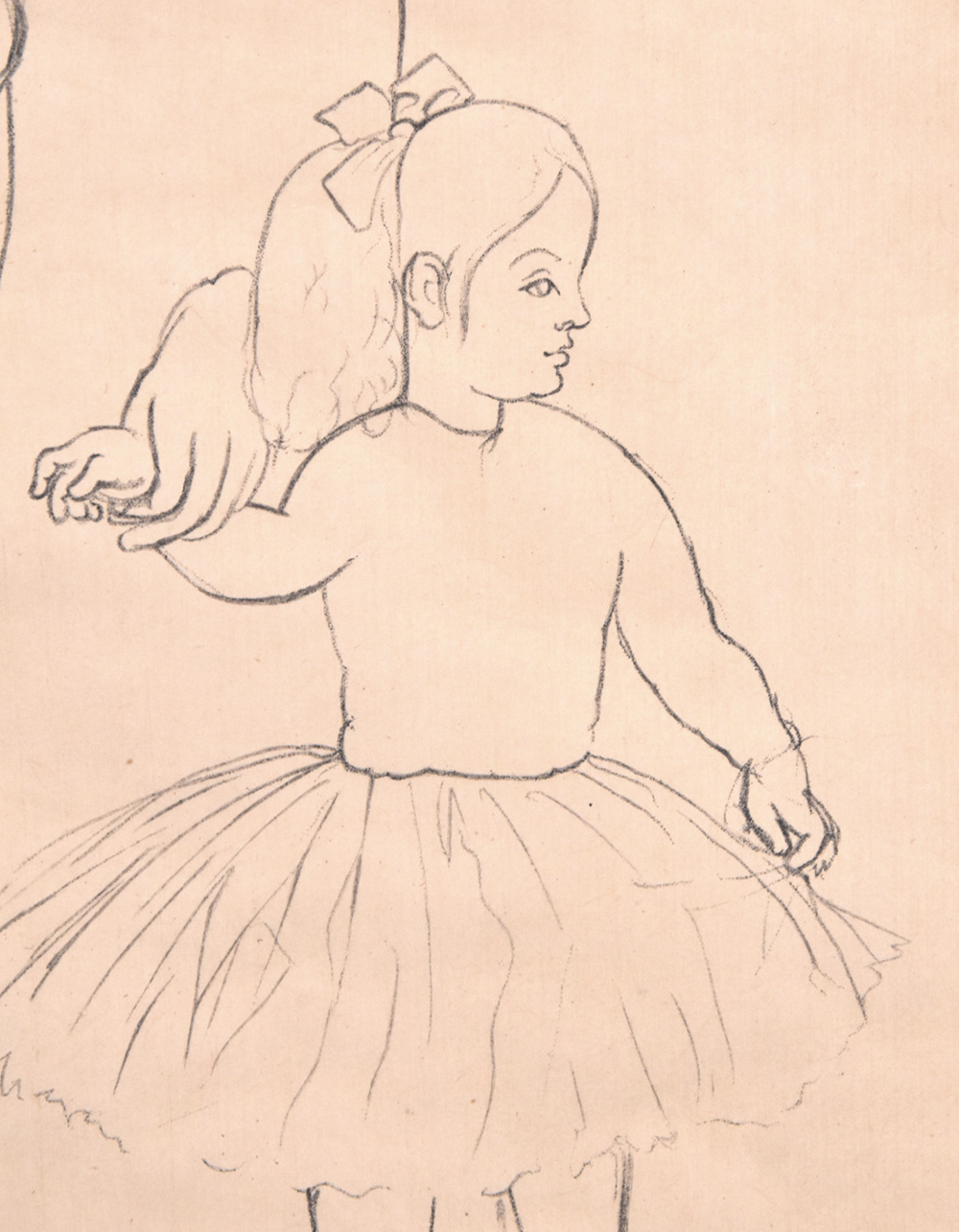 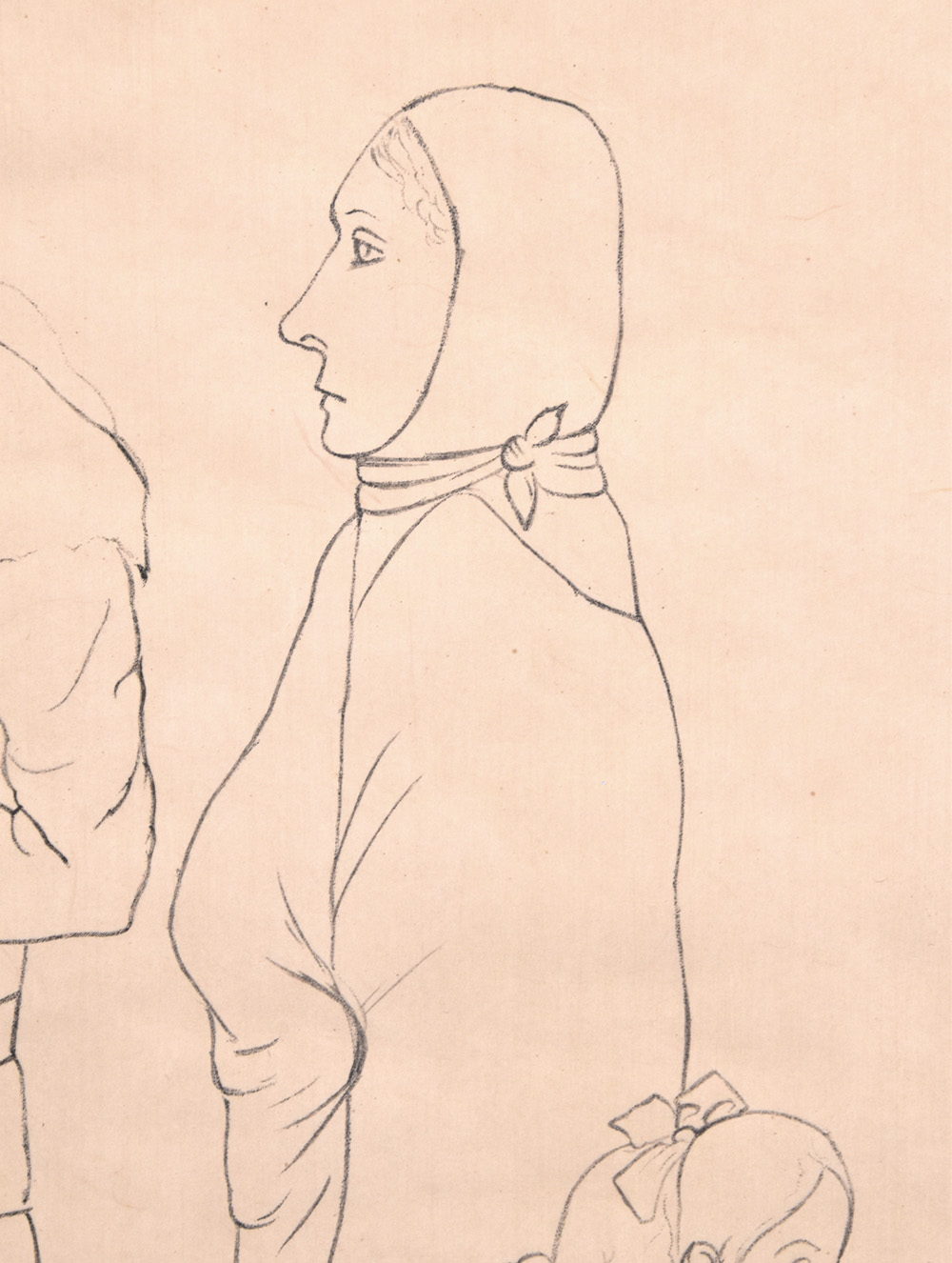 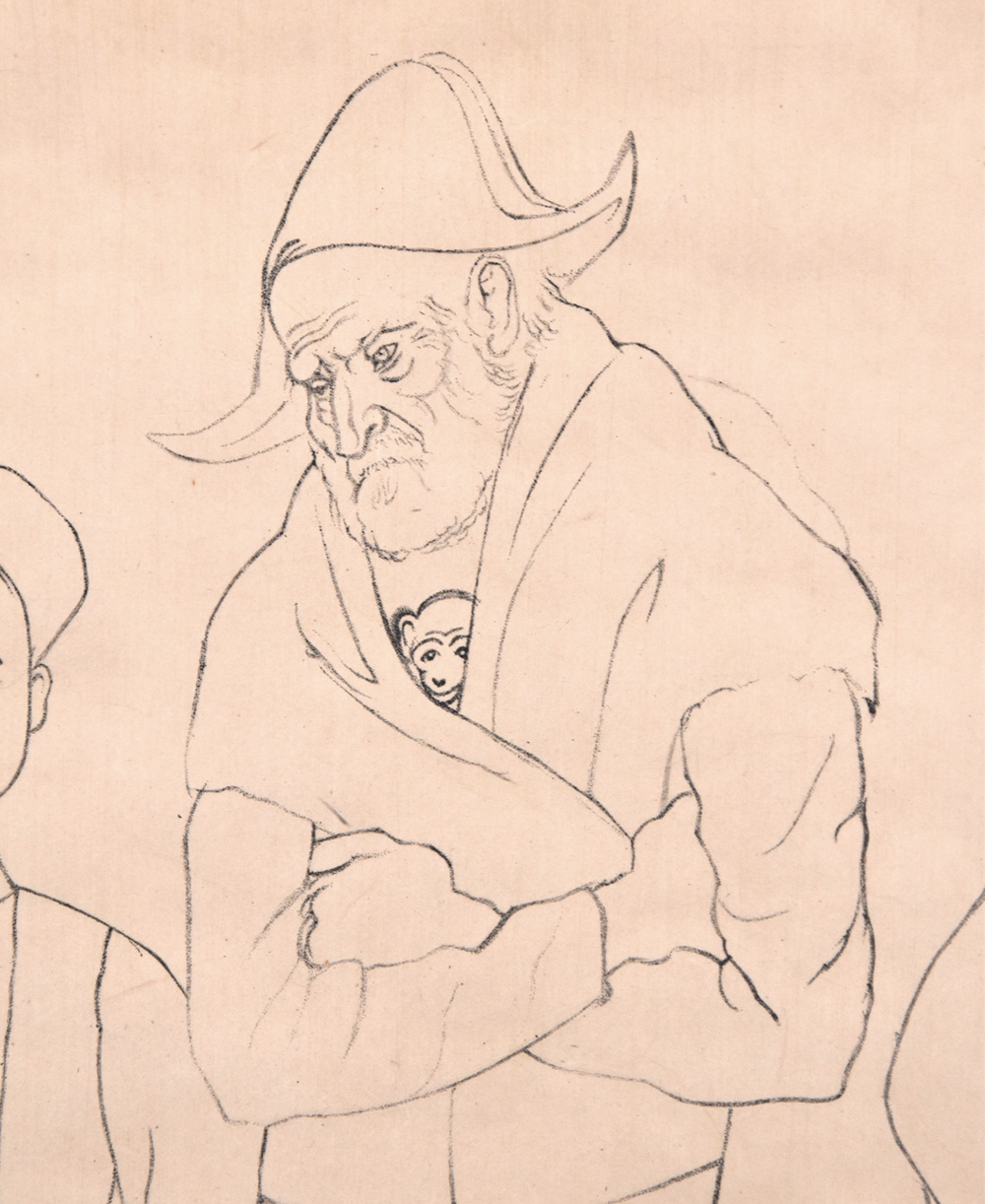 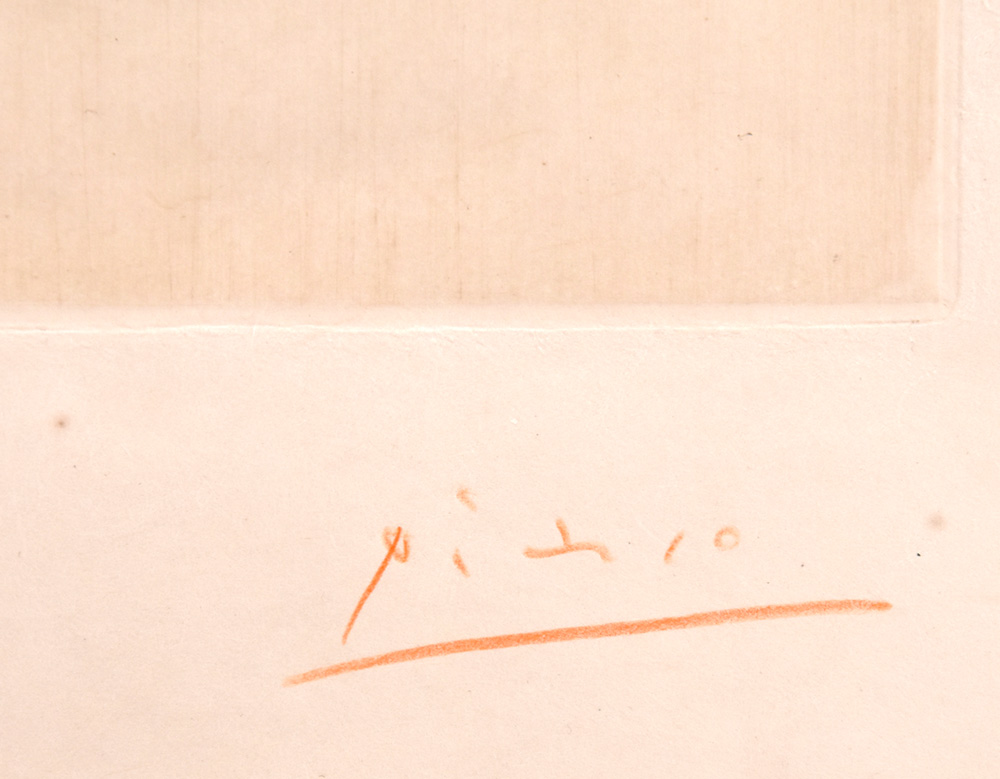 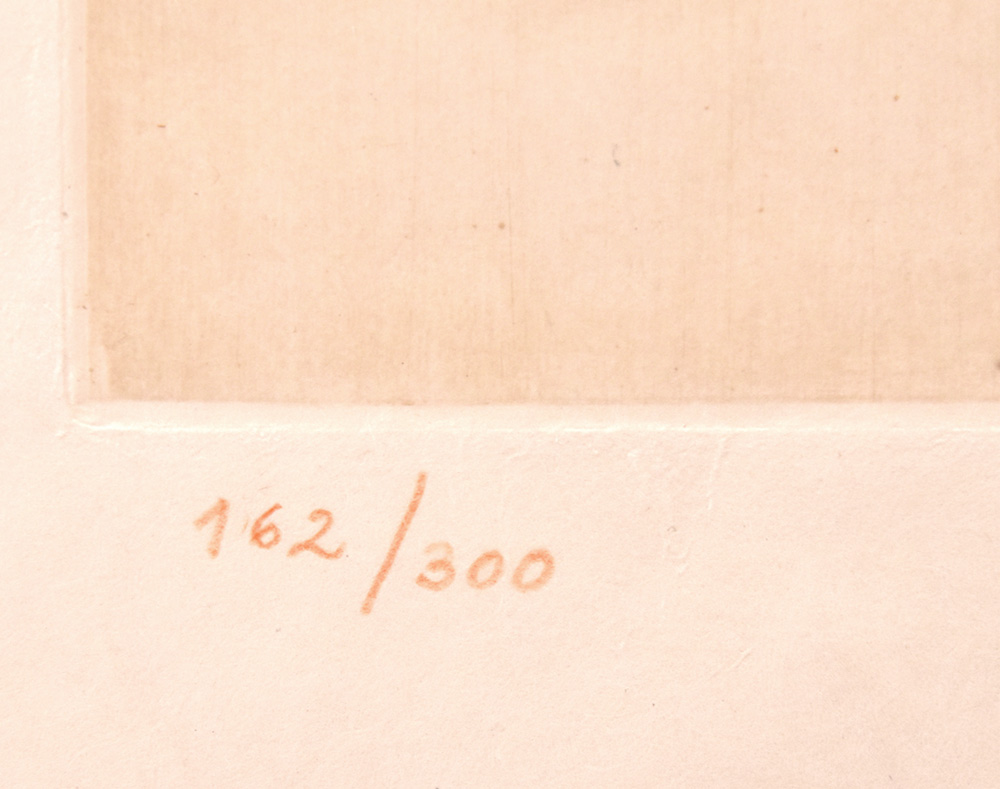 Expressive and delicate features grace the faces of the individuals in Pablo Picasso Famille des Saltimbanques (Family of Acrobats), c. 1950. A boy stands facing front with an innocent and open face. His father next to him crosses his arms across his body, enclosing a monkey in his jacket. His face is lined and brow is furrowed, looking unhappy. The mother looks stoically ahead, holding onto the hand of the younger girl who looks behind to where the family has come from. Around her feet runs a small dog, executed in as much detail as the humans. Picasso uses his immense talent at portraying human expression, and each member of the family tells a different part of their story. Each is concentrating on something different, yet there is a cohesiveness to their family group in their understated interactions with one another. For the mother and daughter, it is the physical connection where their hands touch, and for father and son, the connection is the overlap where the son stands slightly behind his father.

Created circa 1950, this soft-ground etching on Japan paper is signed in orange crayon by Pablo Picasso (Malaga, 1881 – Mougins, 1973) in the lower right margin and numbered from the edition of 300 in the lower left; published by Crommelynck, Paris.

Catalogue Raisonné & COA:
Pablo Picasso Family of Acrobats (Famille des Saltimbanques), c. 1950 is fully documented and referenced in the below catalogue raisonnés and texts (copies will be enclosed as added documentation with the invoices that will accompany the sale of the work).

About the Framing:
Framed to museum-grade, conservation standards, Pablo Picasso Family of Acrobats (Famille des Saltimbanques), c. 1950 is presented in a complementary moulding and finished with silk-wrapped mats and optical grade Plexiglas.