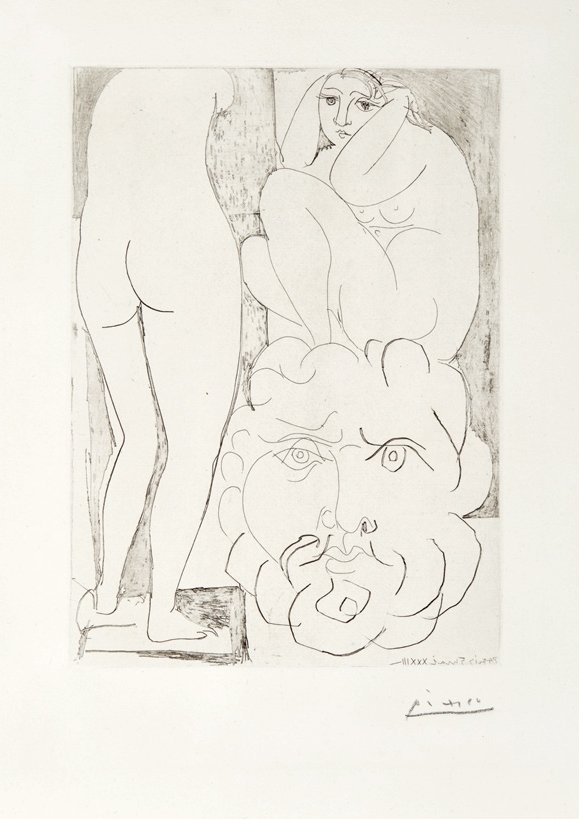 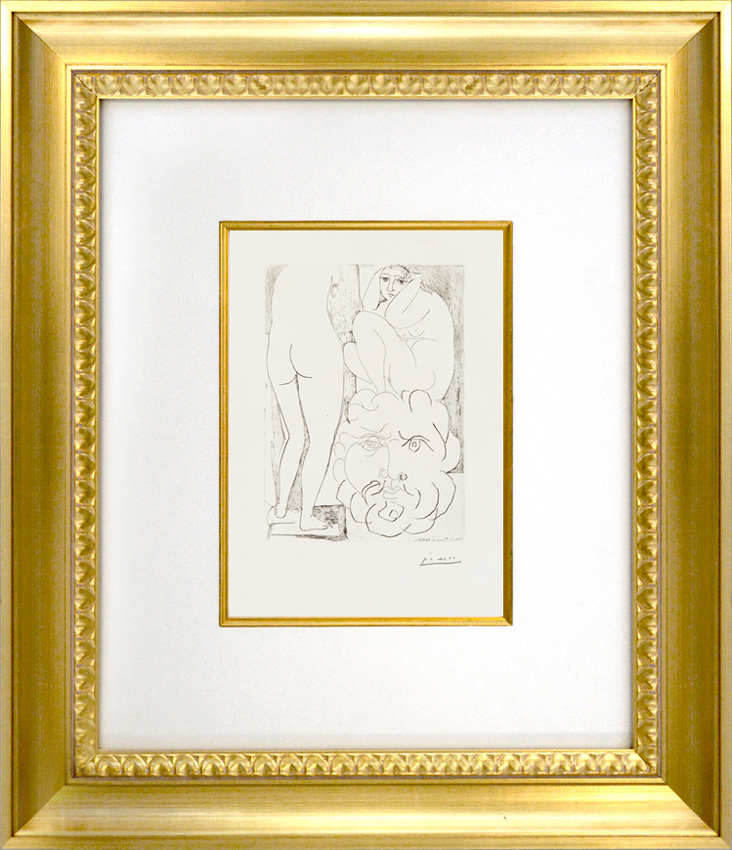 Pablo Picasso Crouching Model, Sculpture of Back and Bearded Head from the Vollard Suite ,1933 is an etching from the highly sought after Vollard suite. The Vollard Suite is a set of 100 etchings in neoclassical style titled after Ambroise Vollard, the art dealer who commissioned their creation. The suite features a slew of characters, from Picasso's young mistress Marie-Thérèse Walter to rapturous minotaurs. The artist took a long time to finish the suite, and in the process he developed new etching techniques. Most of the etchings only have a single state, however several exist in multiple states, the most being 14.

This particular etching has a beautiful composition. Three characters appear, a bearded face, a crouching woman, and the rear-view of a sculpture.Sleek, minimalist lines against a grayish background showcase Picasso's unique aesthetic. While none of the figures are distorted, Picasso experiments with an adventurous sense of perspective. It is not entirely clear which figure fully dominates the foreground, the sculpture or the head. In the background, the female model appears to be hovering above the bearded head. This scene is possibly one from an artist's studio, Picasso's subtle way of reminding us what truly inspires him artistically. Above all, this etching demonstrates Picasso's ability to convey symbolism and complex narrative.

Catalogue Raisonné & COA:
Crouching Model, Sculpture of Back and Bearded Head from the Vollard Suite ,1933 is fully documented and referenced in the below catalogue raisonnés and texts (copies will be enclosed as added documentation with the invoices that will accompany the final sale of the work).

About the Framing:
Framed to museum-grade, conservation standards, Picasso Crouching Model, Sculpture of Back and Bearded Head (Modele Accroupi, Sculpture de  Dos et Tete Barbue), 1933 is presented in a complementary moulding and finished with silk-wrapped mats and optical grade Plexiglas.