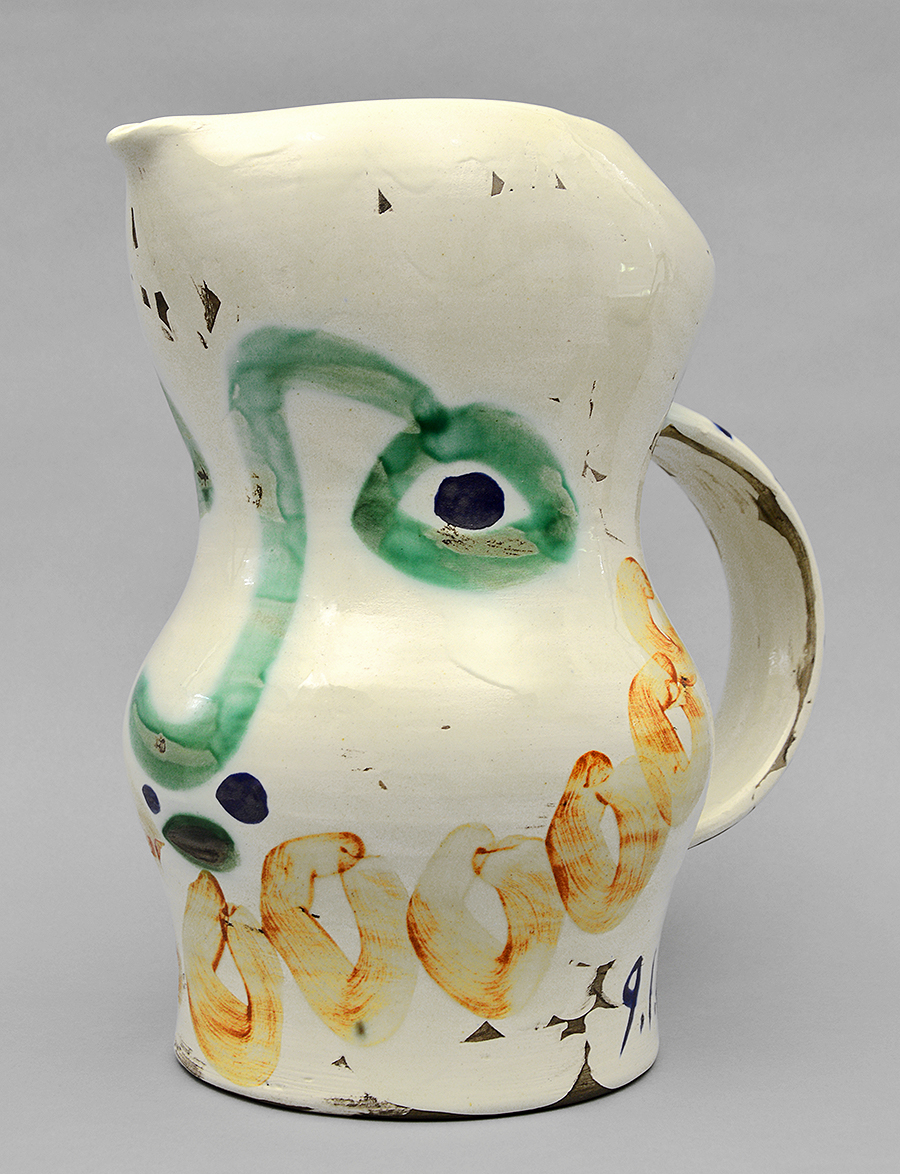 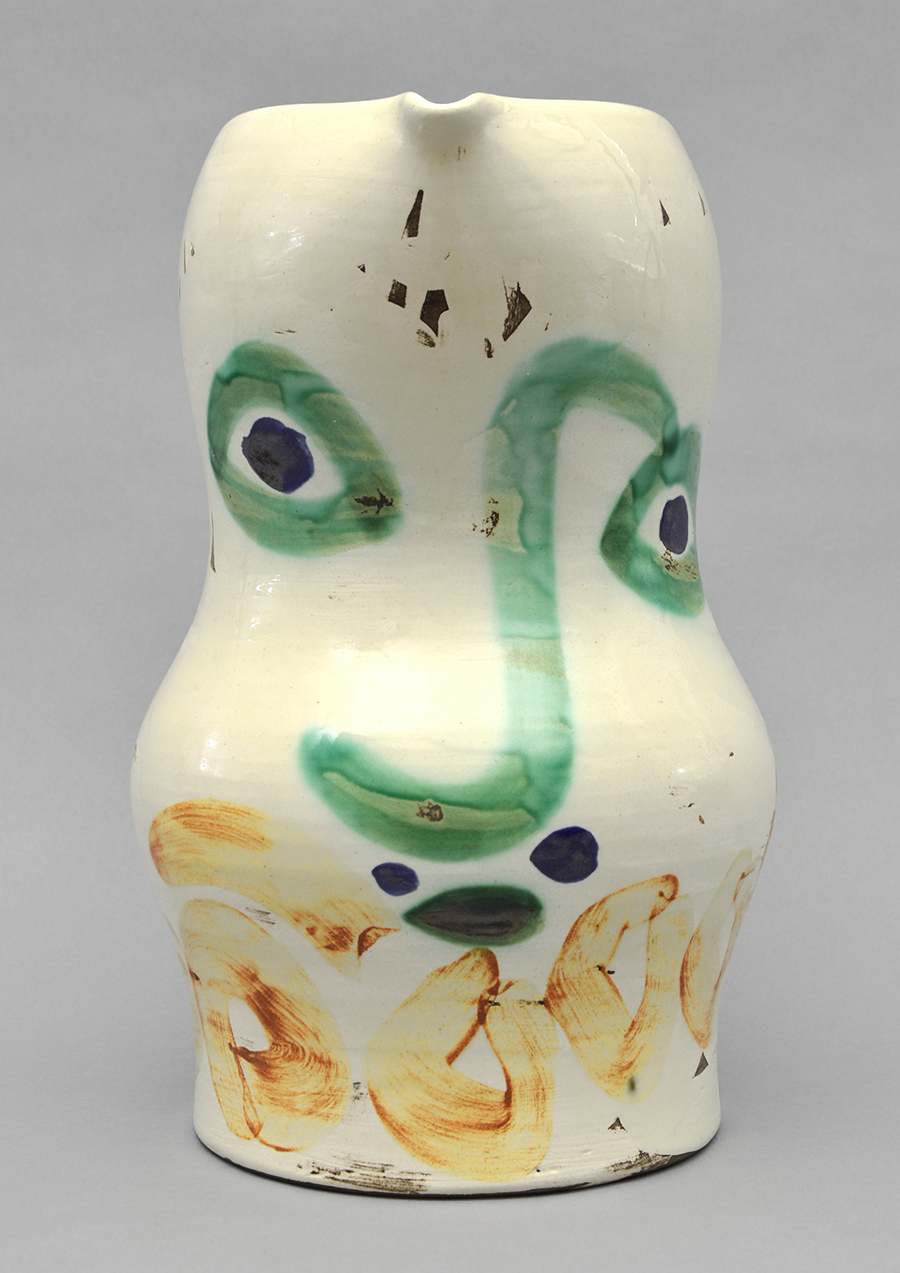 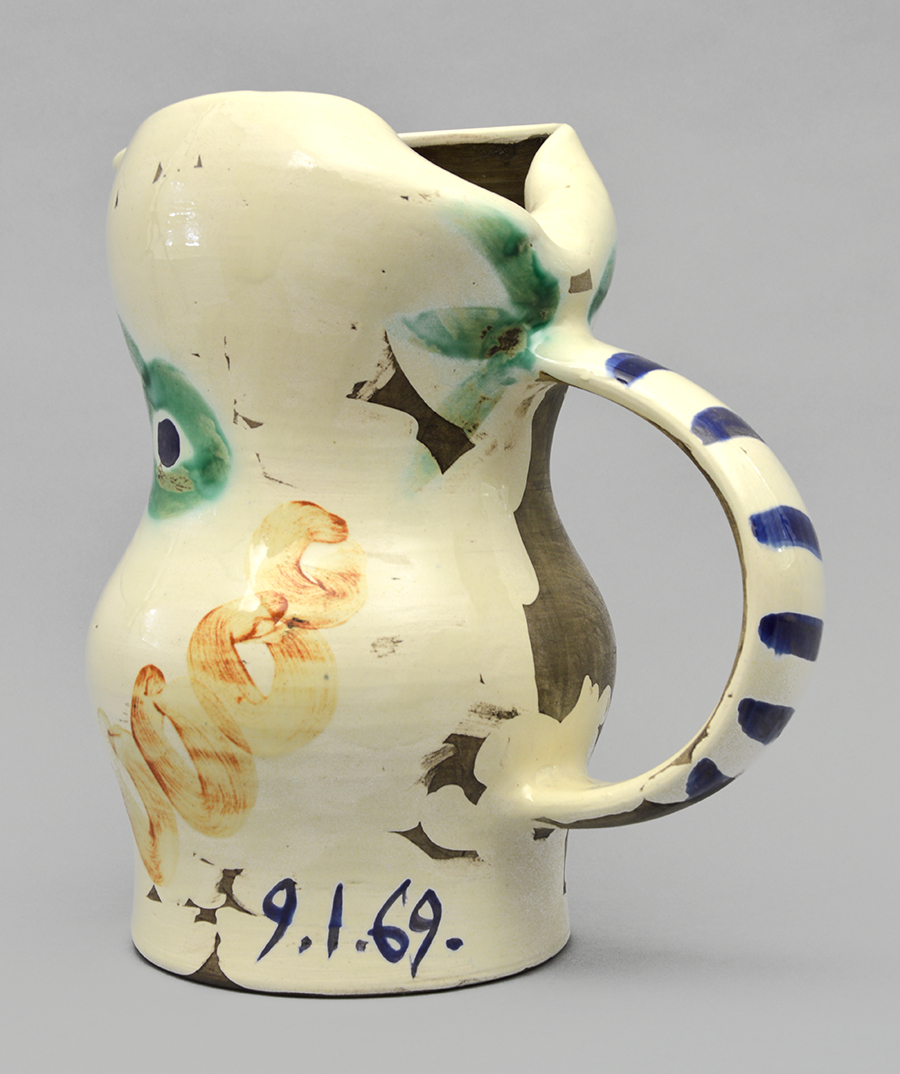 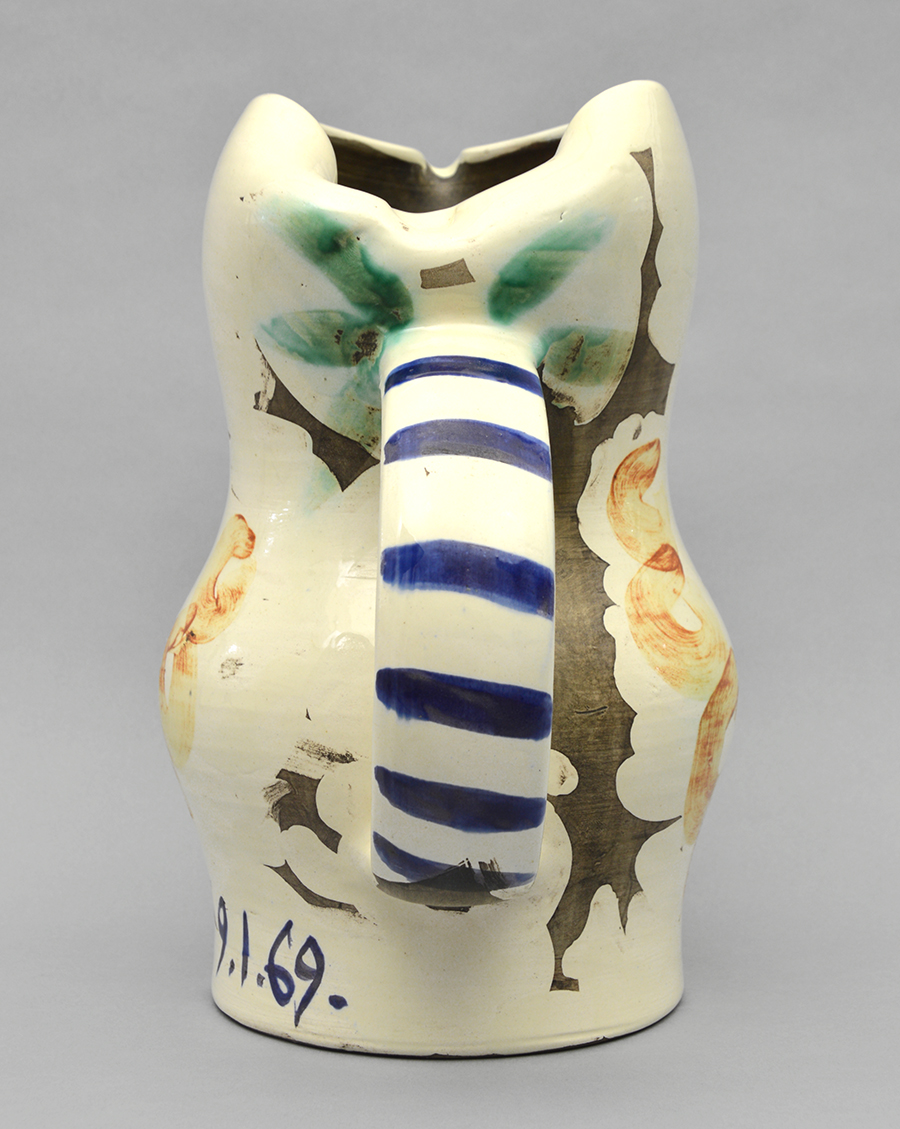 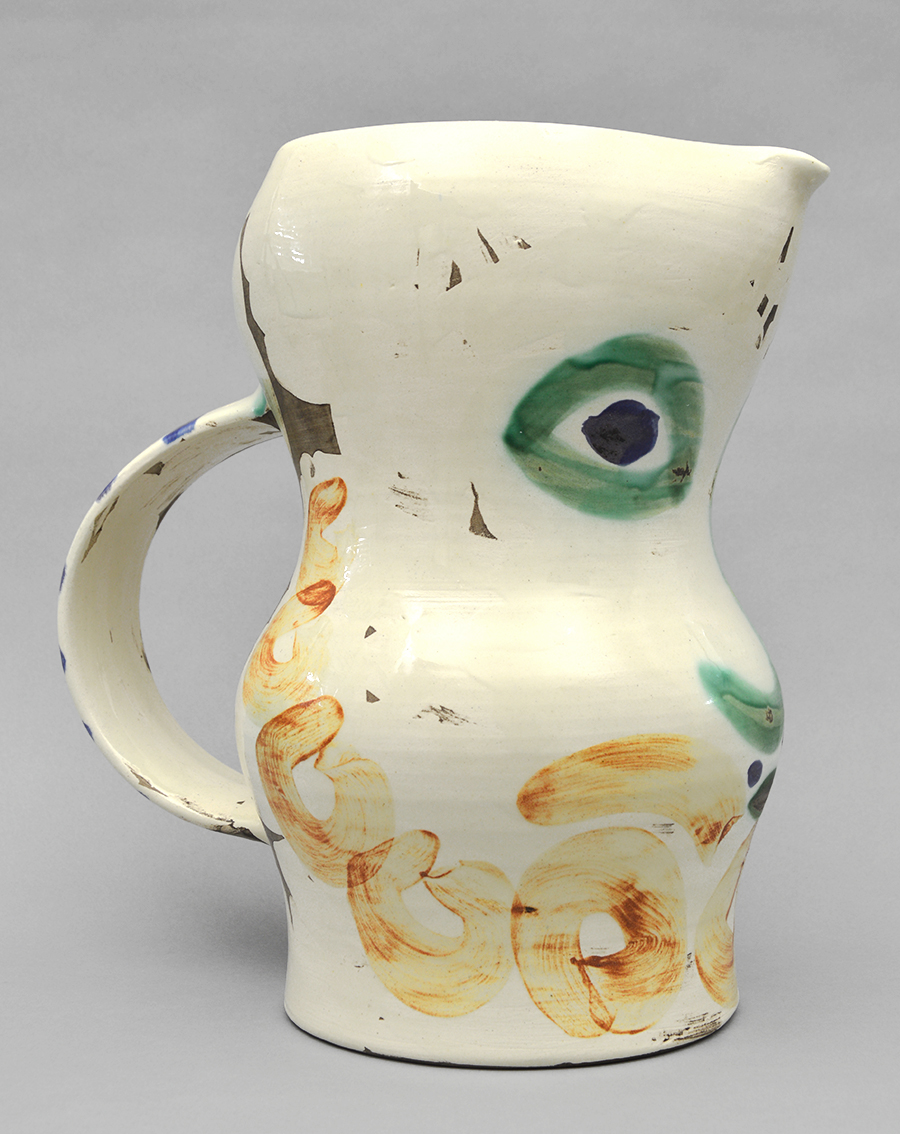 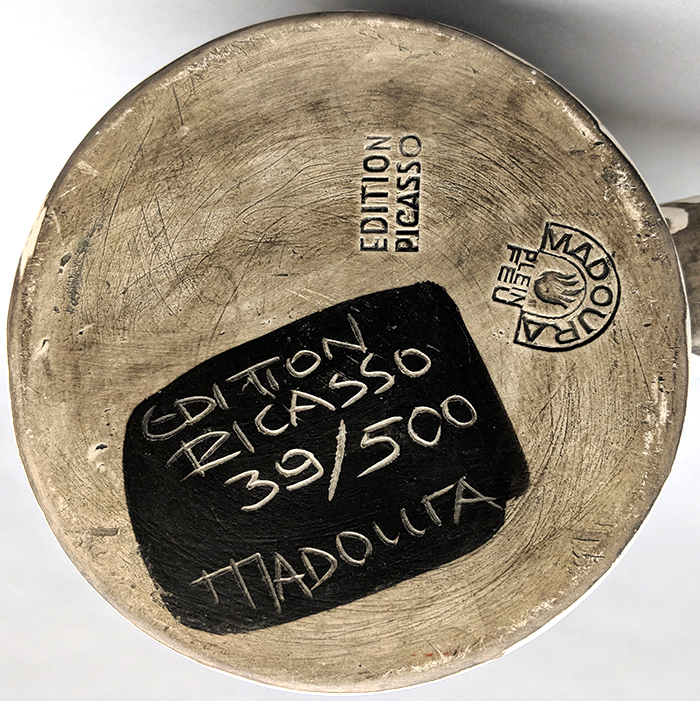 A wonderful and lively work, Pablo Picasso ceramic Visage aux cercles (Face with Circles), 1969 A.R. 612 employs a light color palette of blue, green, and red, on a flush white background. Picasso exaggerates certain facial characteristics such as the eyes and nose, which are all overtly large. The brow of the nose works its way up the face, turning into the left eyebrow. The 'S' shape that results from this moves with the body if the pitcher to draw the eye up and down the ceramic. Dispersed along the base of the ceramic is a continuation of light maroon circles, outlining this character’s face. Although the ceramic itself is oddly shaped, the placements of the characters features are delicately depicted throughout the work, a likeness of Picasso’s acute aesthetic eye. Of course, Picasso was no stranger to the abstract, and in this case, perhaps it was the unusual shape of the pitcher that called to him. The forehead, nose, and mouth protrude outward while the eyes appear to sink in. Bits of grey patina are casually placed all around the body against the glossy finish, exhibiting a combination of a new and old appearance.

Created in 1969, Visage aux cercles (Face with Circles) A.R. 612 is an original Madoura turned pitcher of white earthenware clay, decoration in engobes under partial brushed glaze, grey patina (green, red, blue, white). Numbered from the edition of 500, this work is inscribed ‘EDITION PICASSO’ and ‘MADOURA’ with the ‘MADOURA PLEIN FEU’ and ‘EDITION PICASSO’ pottery stamps on the underside.

Catalogue Raisonné & COA:
Pablo Picasso Visage aux cercles (Face with Circles), 1969 A.R. 612 is fully documented and referenced in the below catalogue raisonnés and texts (copies will be enclosed as added documentation with the invoices accompanying the sale of the work):

1. Ramié, Alain. Picasso Catalogue of the Edited Ceramic Works 1947-1971. Madoura: Galerie Madoura, 1988. Listed and illustrated as catalogue raisonné no. 612.
2. A Certificate of Authenticity will accompany this work.