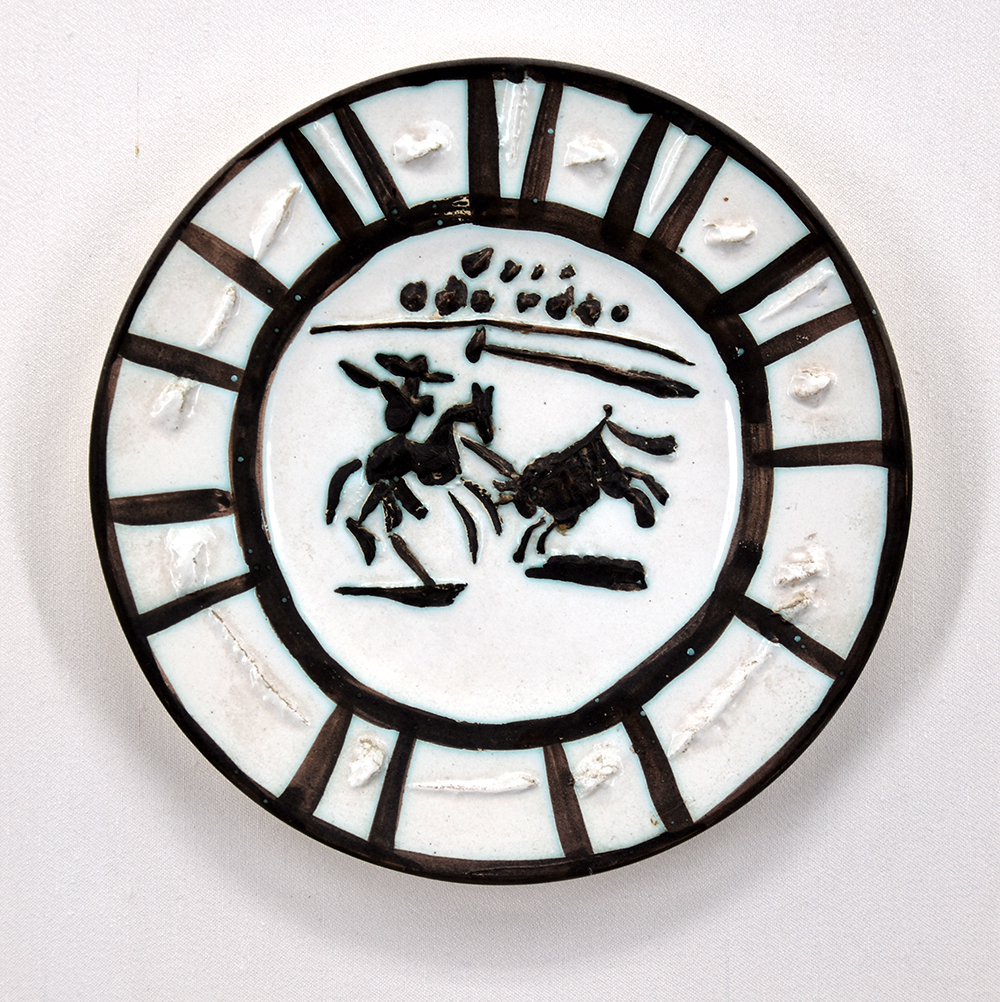 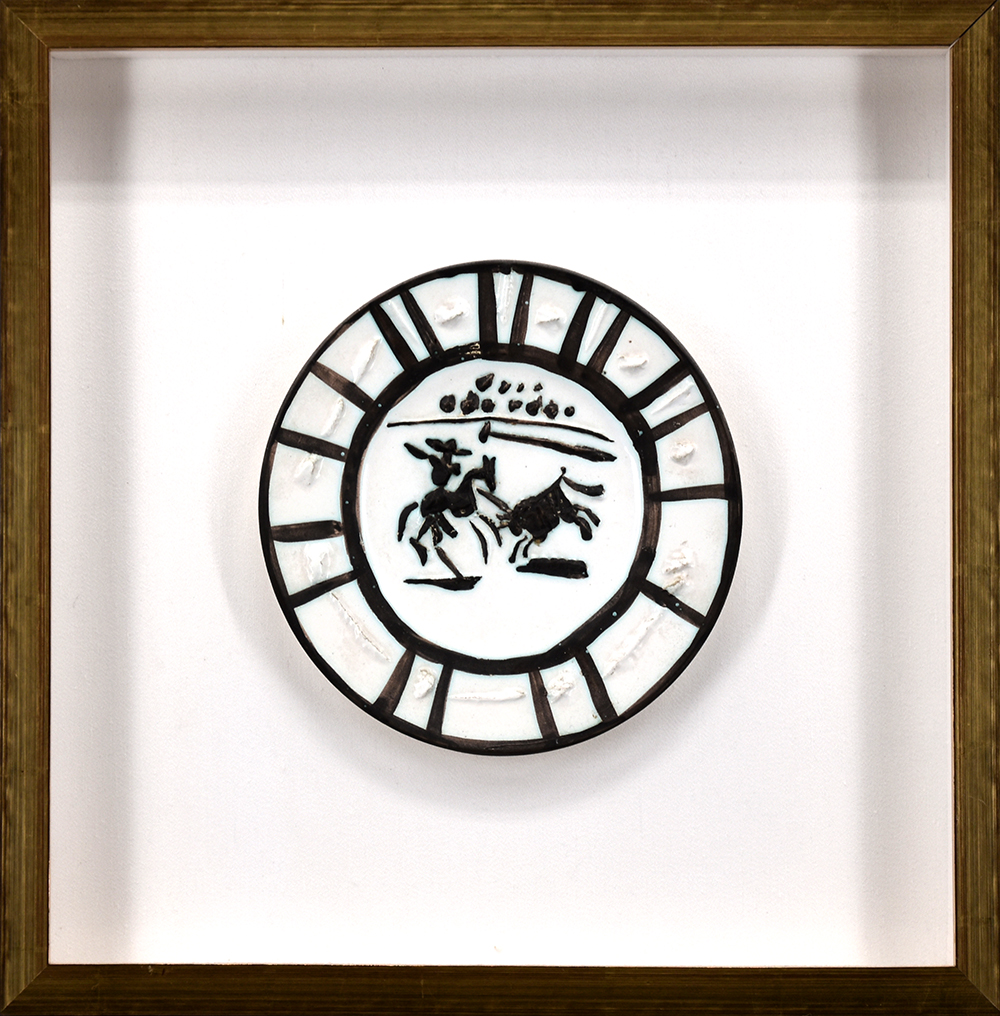 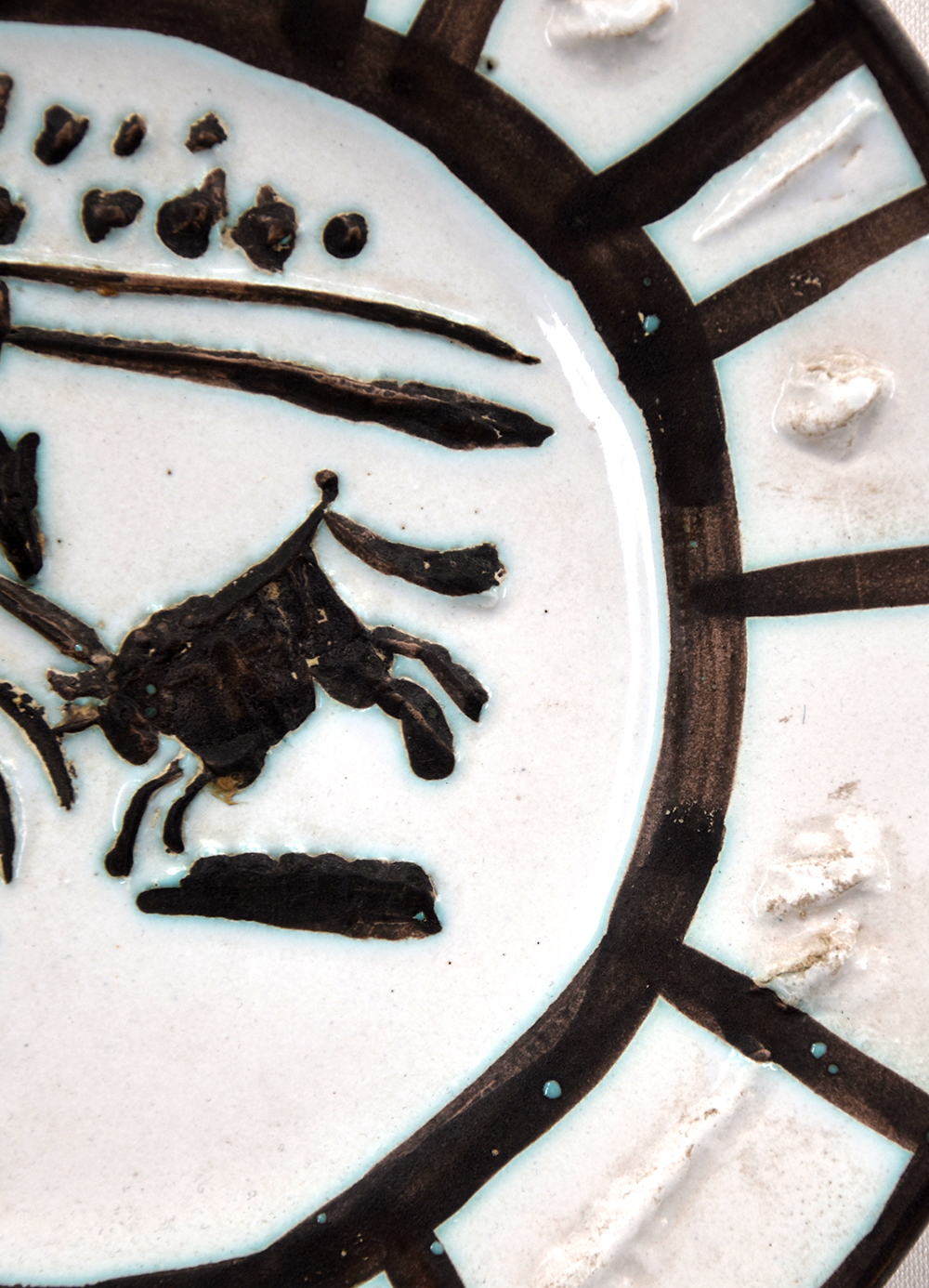 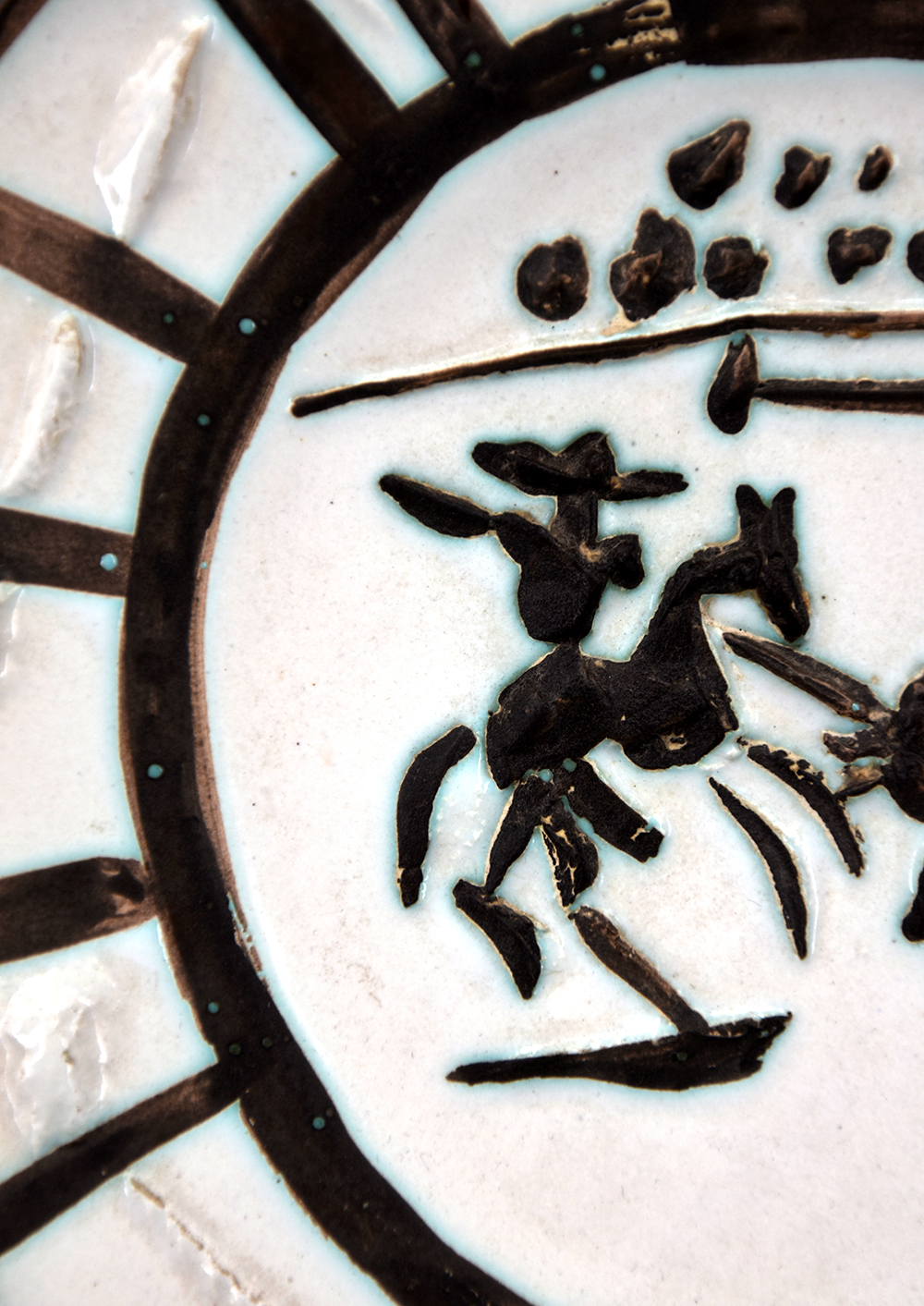 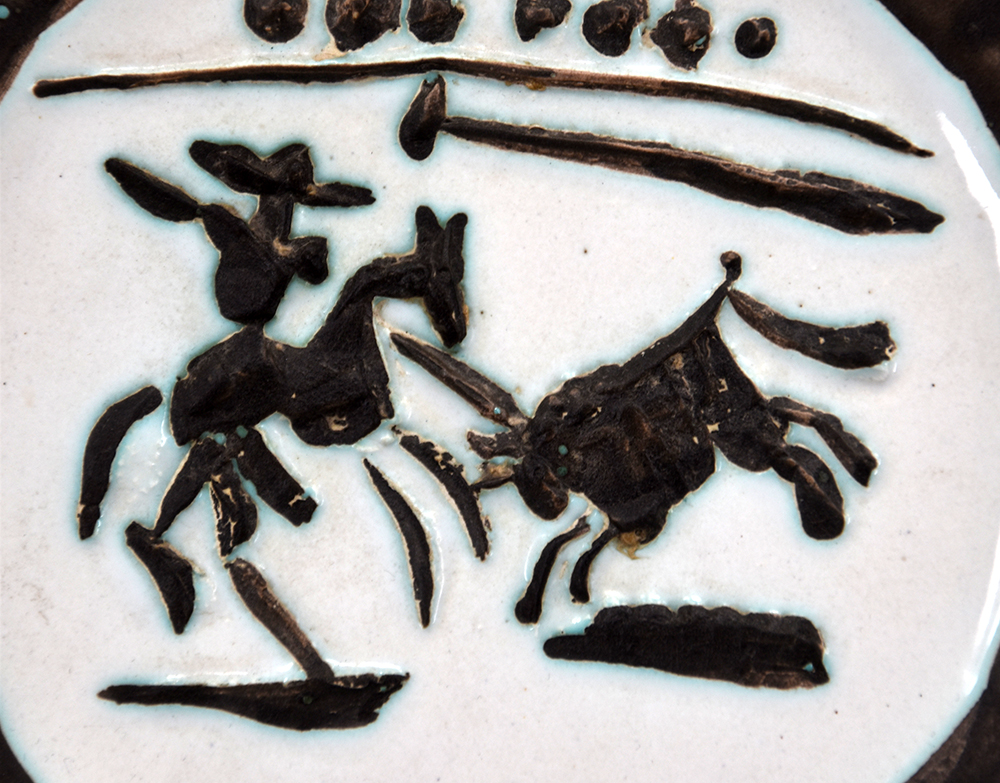 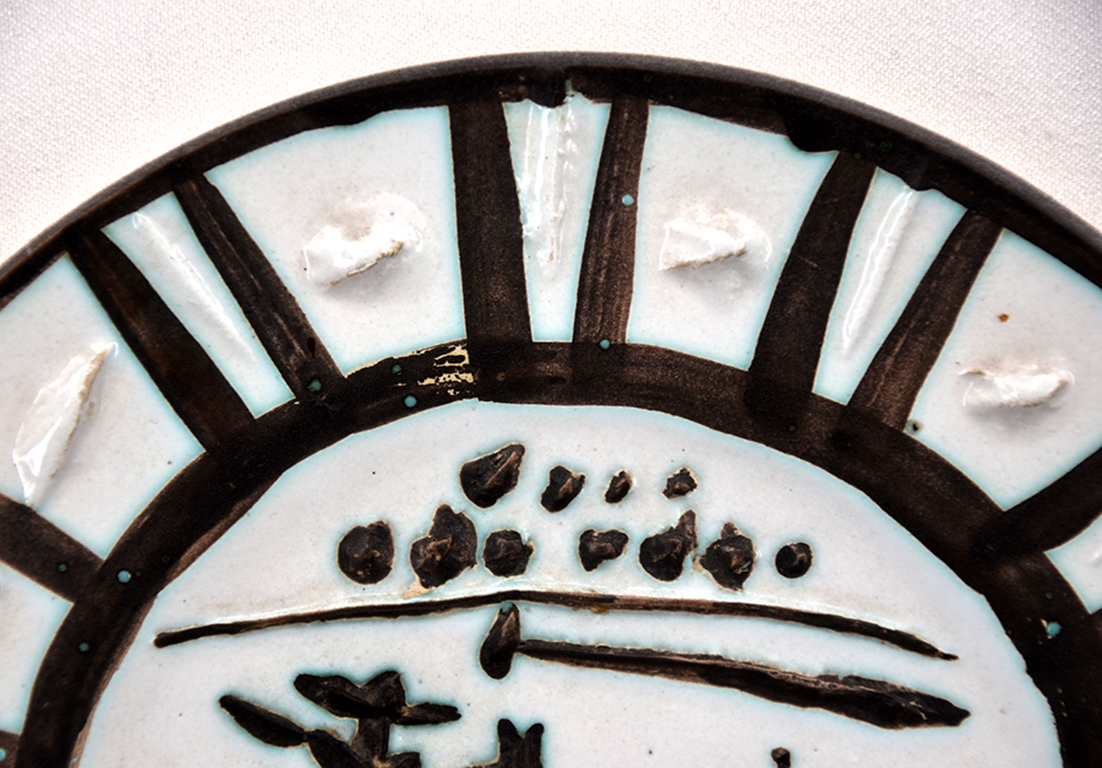 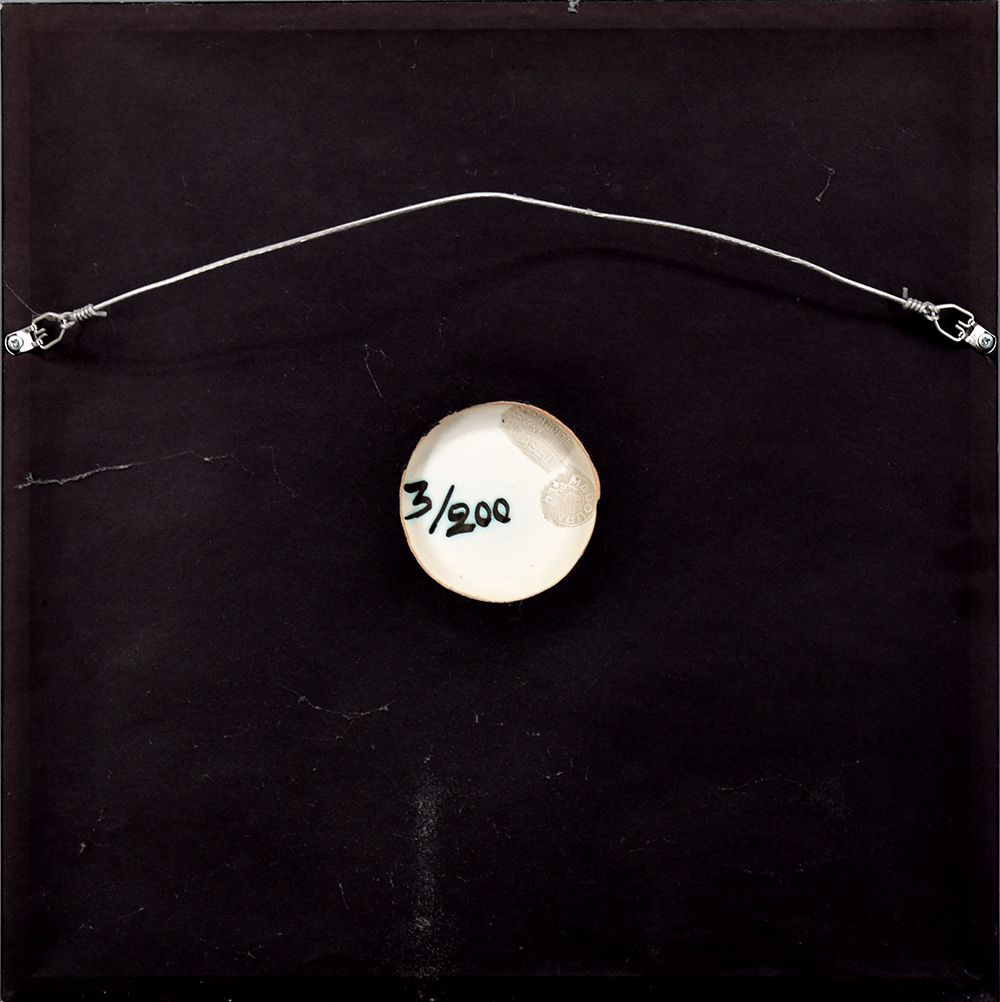 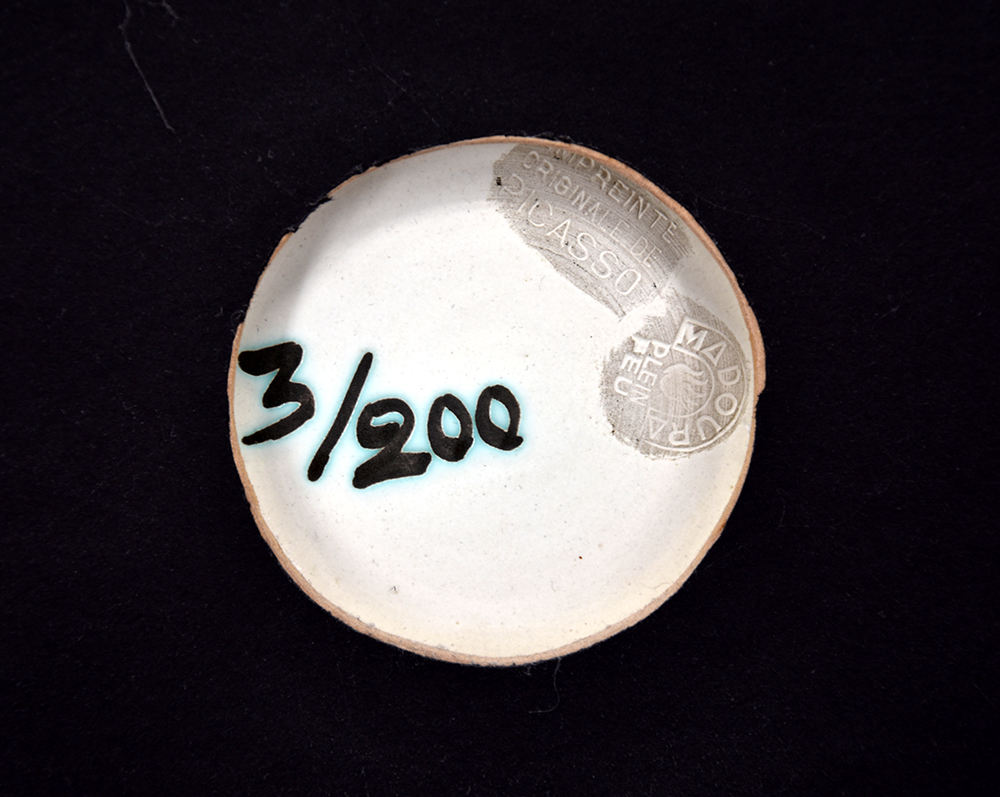 Pablo Picasso ceramic Picador, 1953 A.R. 201 is an exciting moment of confrontation between the picador and the charging bull. The central portion of the plate holds the action – a picador on horseback rears up and points his lance towards the bull. The bull comes in with his head down and horns pointed forward, as he kicks up his feet. Picasso has included the shadows of the characters – a wonderful detail. Behind this we see a crowd of onlookers – a simple black line denotes the transition from the ring to the stadium seats, and black dots stand in for faces in the crown. Though there is not much detail, but it sets the context for the scene.

Around the outside on the lip of the plate, is an abstracted design of black lines framing white rectangles with textured protrusions. Picasso uses the form of the plate in harmony with the decorative aspects. Bull fights are a common subject in Picasso’s oeuvre but in particular on his ceramic works. It comes from a fascination with bull fights in his native Spain as a child. Picasso is able to depict incredible energy through simplistic figures.

Created in 1953, Picador A.R. 201 is a madoura round plate with white enamel clay, oxidized paraffin decoration (brown, green) and white enamel bath stamped with the ‘EMPREINTE ORIGINALE DE PICASSO’ and ‘MADOURA PLEIN FEU’ pottery stamps on the underside; numbered from the edition of 200.

Catalogue Raisonné & COA:
Pablo Picasso ceramic Picador, 1953 A.R. 201 is fully documented and referenced in the below catalogue raisonnés and texts (copies will be enclosed as added documentation with the invoices that will accompany the sale of the work).

1. Ramié, Alain. Picasso Catalogue of the edited ceramic works 1947-1971. Vallauris: Madoura,1988. Listed and illustrated as catalogue raisonné no. 201.
2. A Certificate of Authenticity will accompany this artwork.