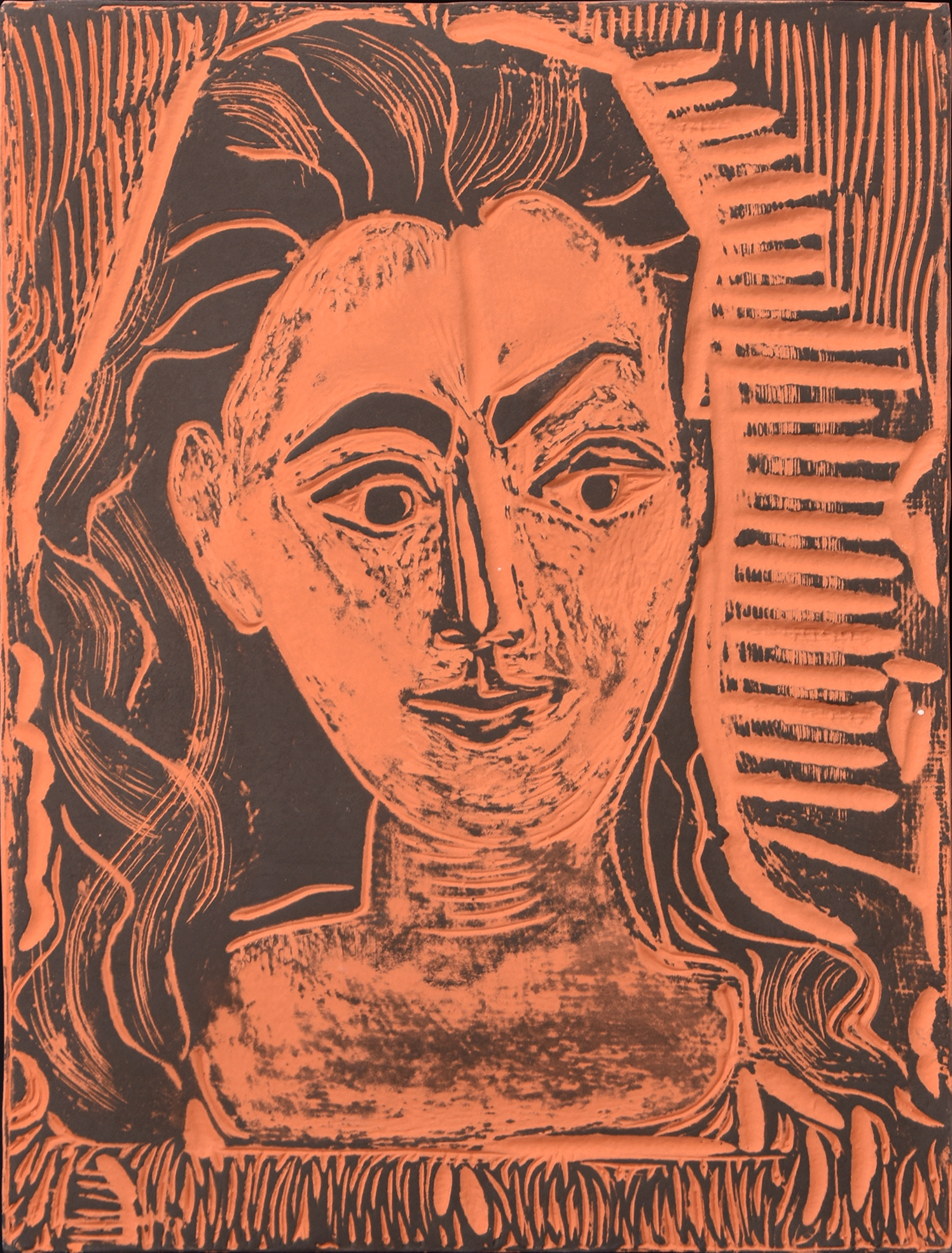 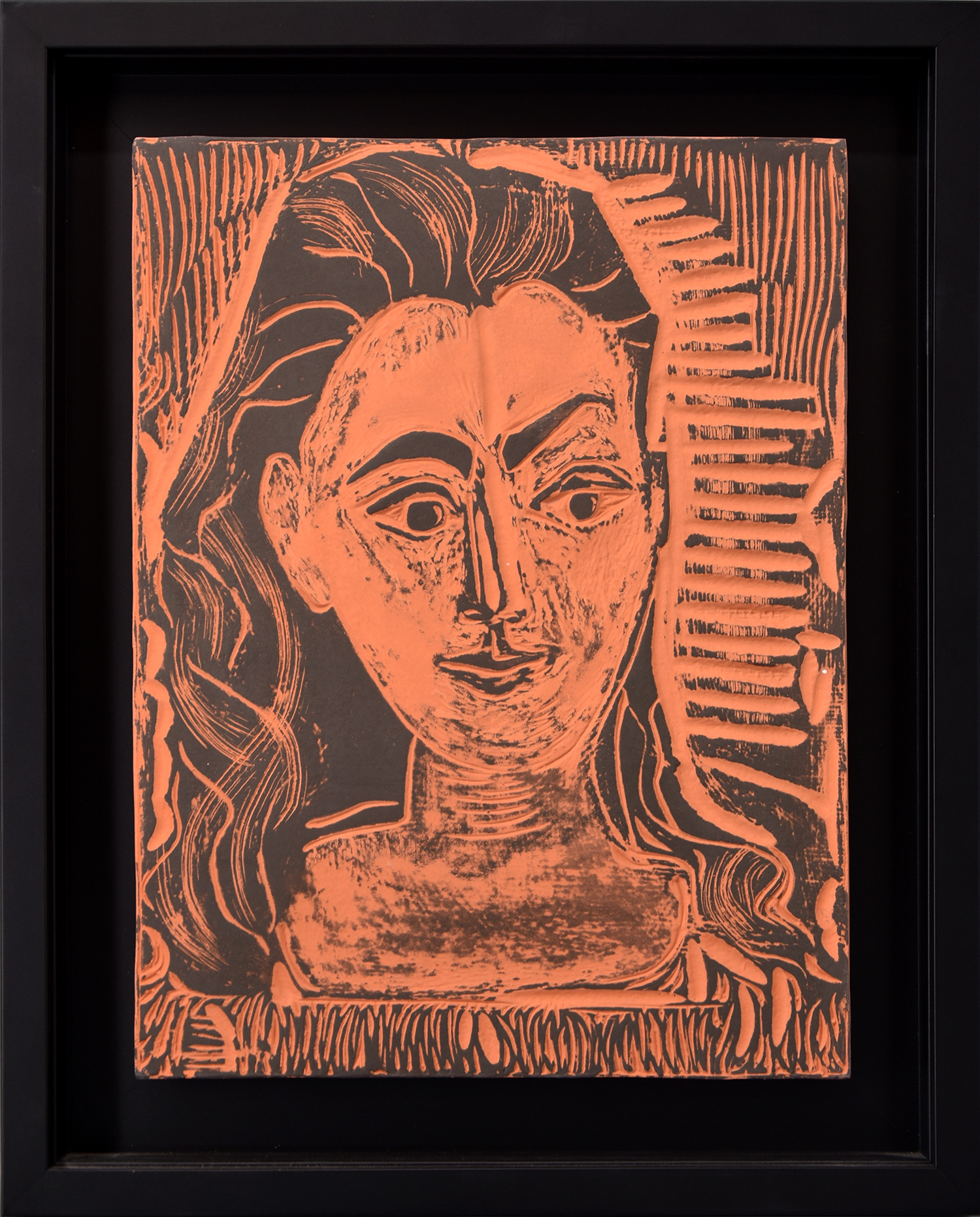 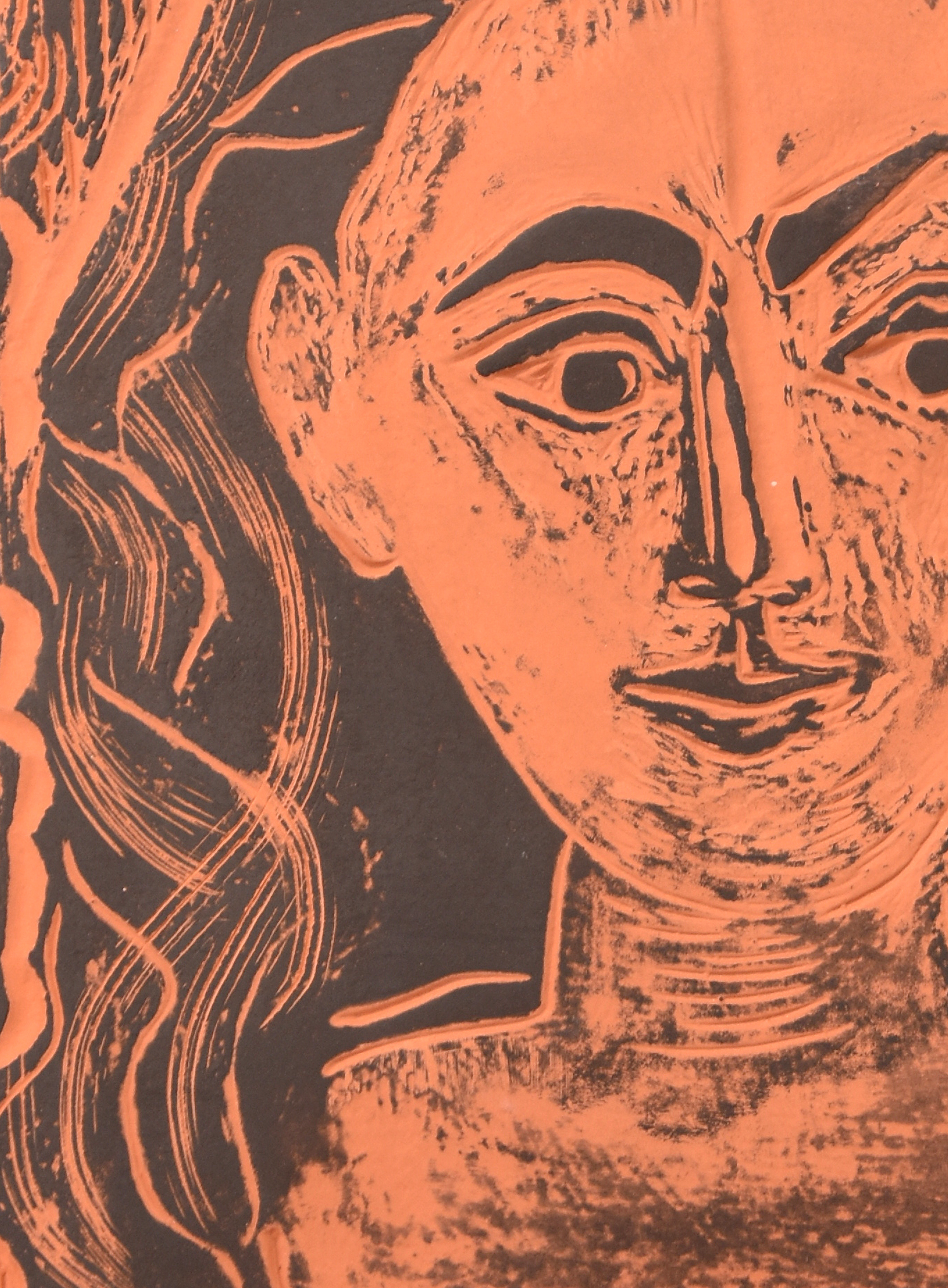 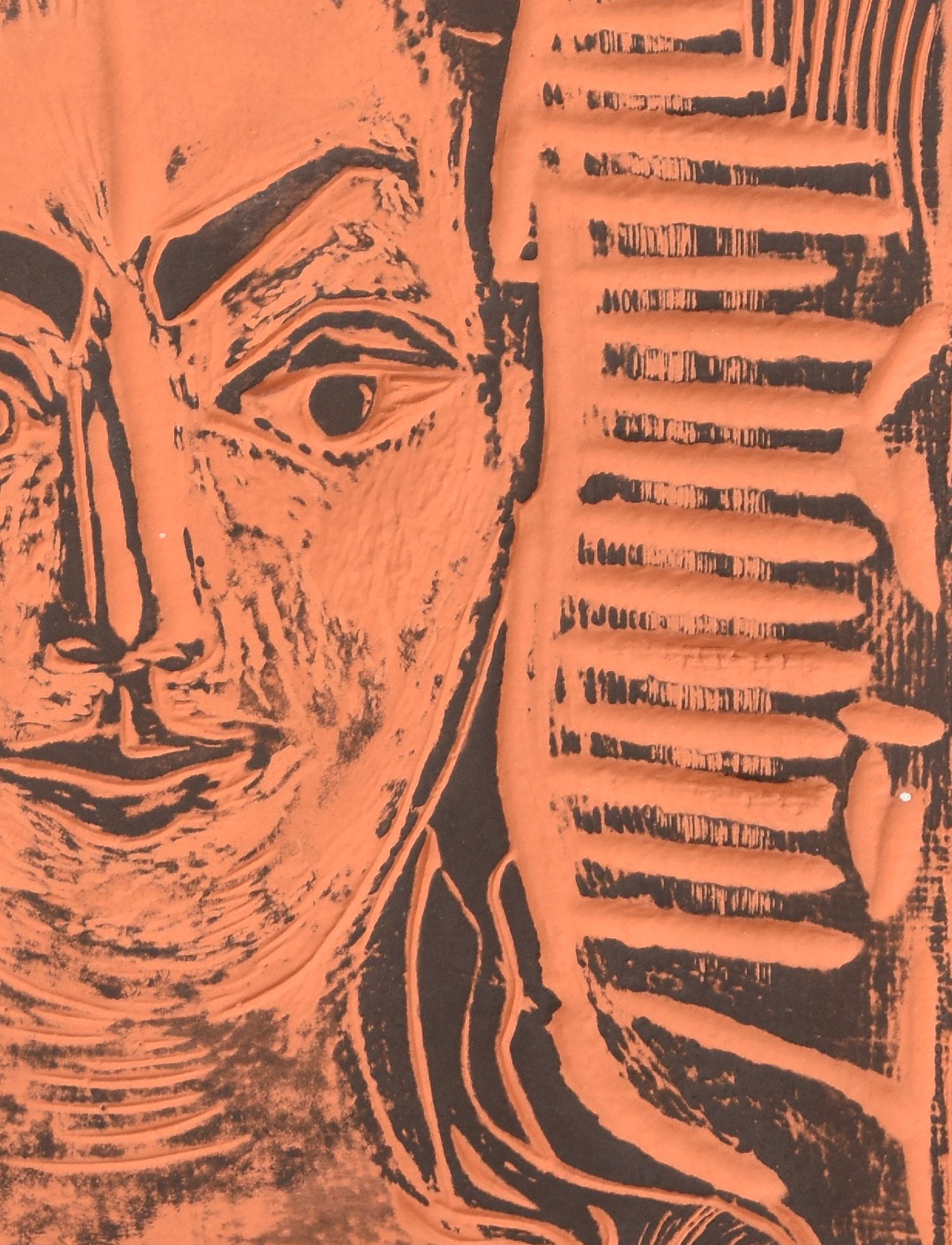 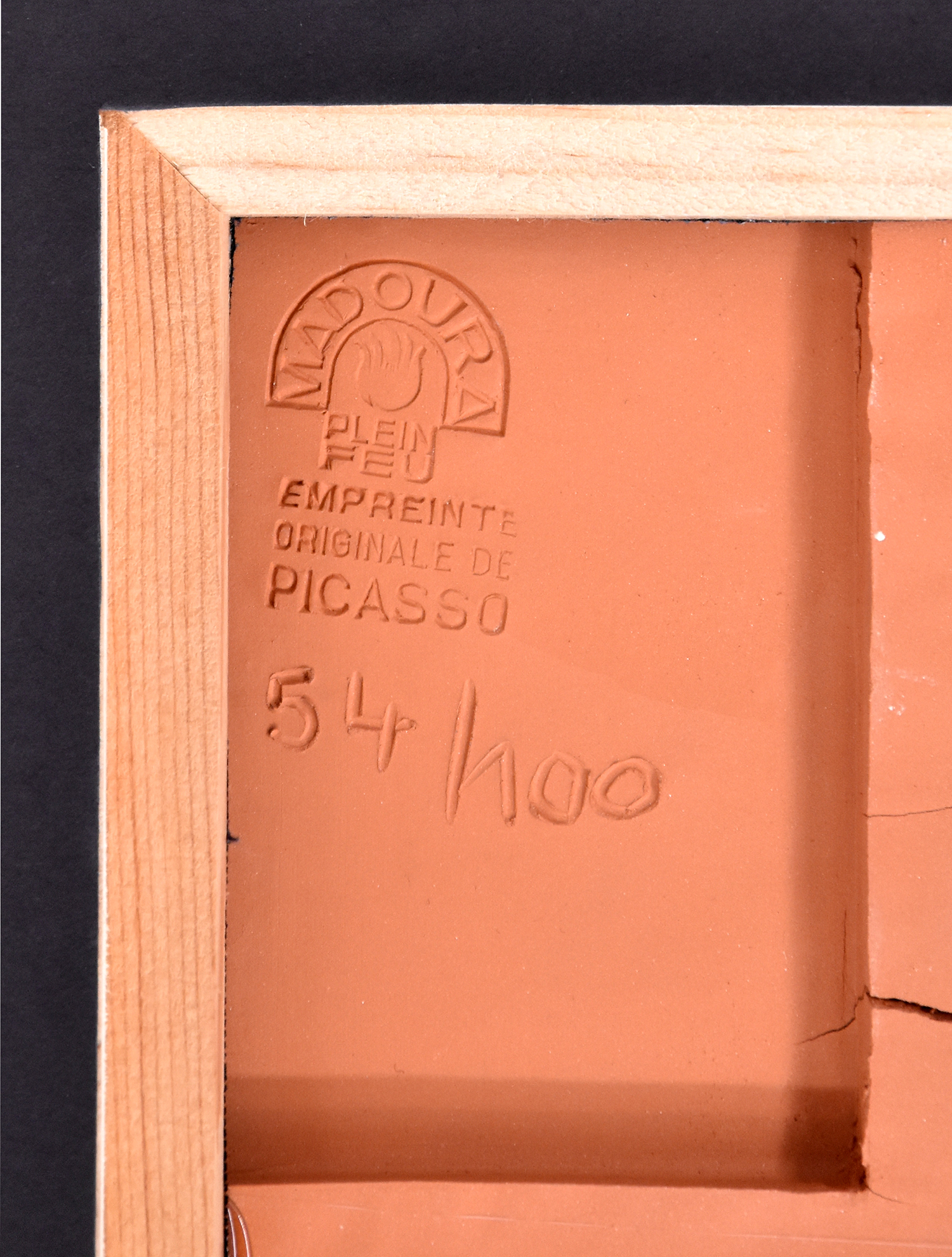 A remarkably detailed image of a beautiful and mysterious woman, Pablo Picasso ceramic Petit Buste de Femme (Little Bust of Woman), 1964 A.R. 523, maintains the beautifully saturated black engobe printing and pristine markings on the reverse. The woman turns her head slightly to the viewer's right, denying the viewer a confrontational head-on view. She smiles slightly, gazing at something beyond the viewer. Picasso juxtaposes delicate, closely placed vertical lines with strong horizontals, particularly along the right border, and frames the beautiful woman in varied linear patterns, as if she is gazing out from a window. Picasso ceramic Little Bust of Woman is part of a grouping of Picasso ceramic plaques that were made from linocuts in 1964. To make the image, the clay is impressed on a plaster mould. In the case of Petit Buste de Femme, the plaster mould was cast from an engraving on linoleum. The original engraving was meant to be printed on paper, but was instead used to make a clay impression. This leads to a confluence of mediums in this work, which is ceramic, but retains some of the artistic elements that linocuts do.

Created in 1964, this original Madoura rectangular plaque is made of red earthenware clay, printed with engobe pad in black. This artwork is stamped with the 'MADOURA PLEIN FEU' and 'EMPREINTE ORIGINALE DE PICASSO' pottery stamps on the reverse; from the total numbered edition of 100.