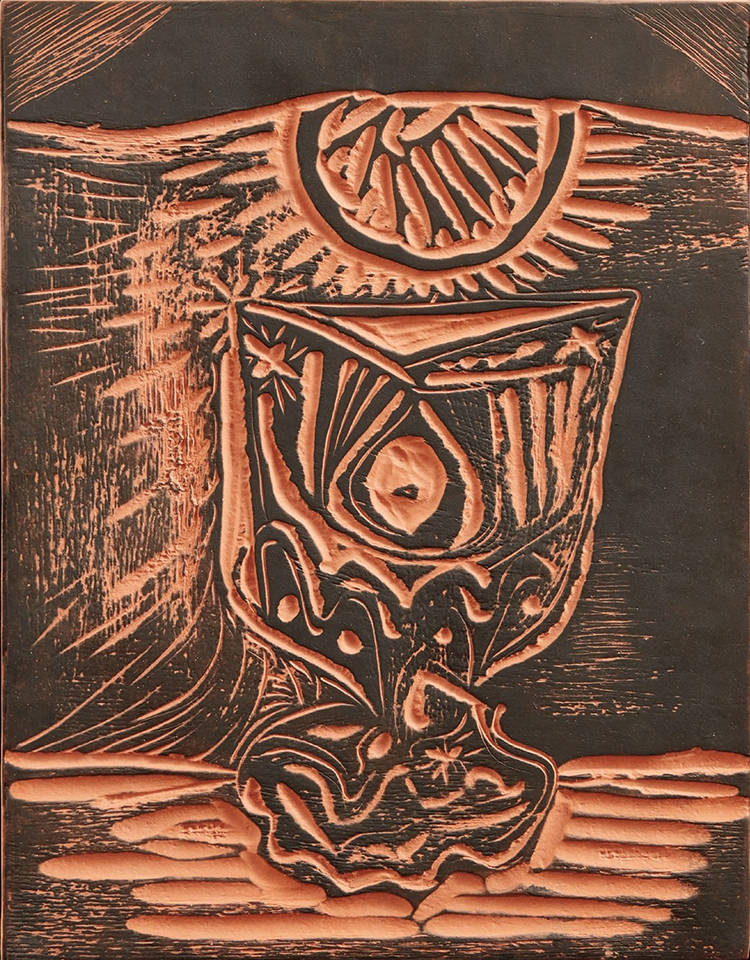 Pablo Picasso  (Málaga, 1881 – Mougins, 1973) Le Verre Sous La Lampe (Glass Under Lamp), 1964 depicts a complicated image of, as the title suggest, a glass sitting on a table below an overhead lamp. The variation in line weight and profundity of the mark-making create a dynamic vision of what would generally be a very ordinary scene. This work is a testament to Picasso’s reputation for reinvention; a still life presented in such a fashion as this one is nearly unheard of. Bordering on abstraction, the rendering of this glass under a lamp separates the forms into distinct pieces of light and dark that bring a unique dynamism to the work as a whole. The deformities of the symmetry of the glass and the lamp give vitality and personality to the forms which would otherwise be commonplace and decorative.

Created in 1964, this Pablo Picasso  (Málaga, 1881 – Mougins, 1973) Le Verre Sous La Lampe (Glass Under Lamp), 1964  Red Earthenware rectangular plaque is annotated ‘J. 105’ and numbered from the edition of 100 in black ink. It is also stamped with the ‘MADOURA PLEIN FEU’ and ‘EMPREINTE ORIGINALE DE PICASSO’ pottery stamps on the reverse.

Pablo Picasso  (Málaga, 1881 – Mougins, 1973) Le Verre Sous La Lampe (Glass Under Lamp), 1964 is fully documented and referenced in the below catalogue raisonnés and texts (copies will be enclosed as added documentation with the invoices that will accompany the sale of the work)