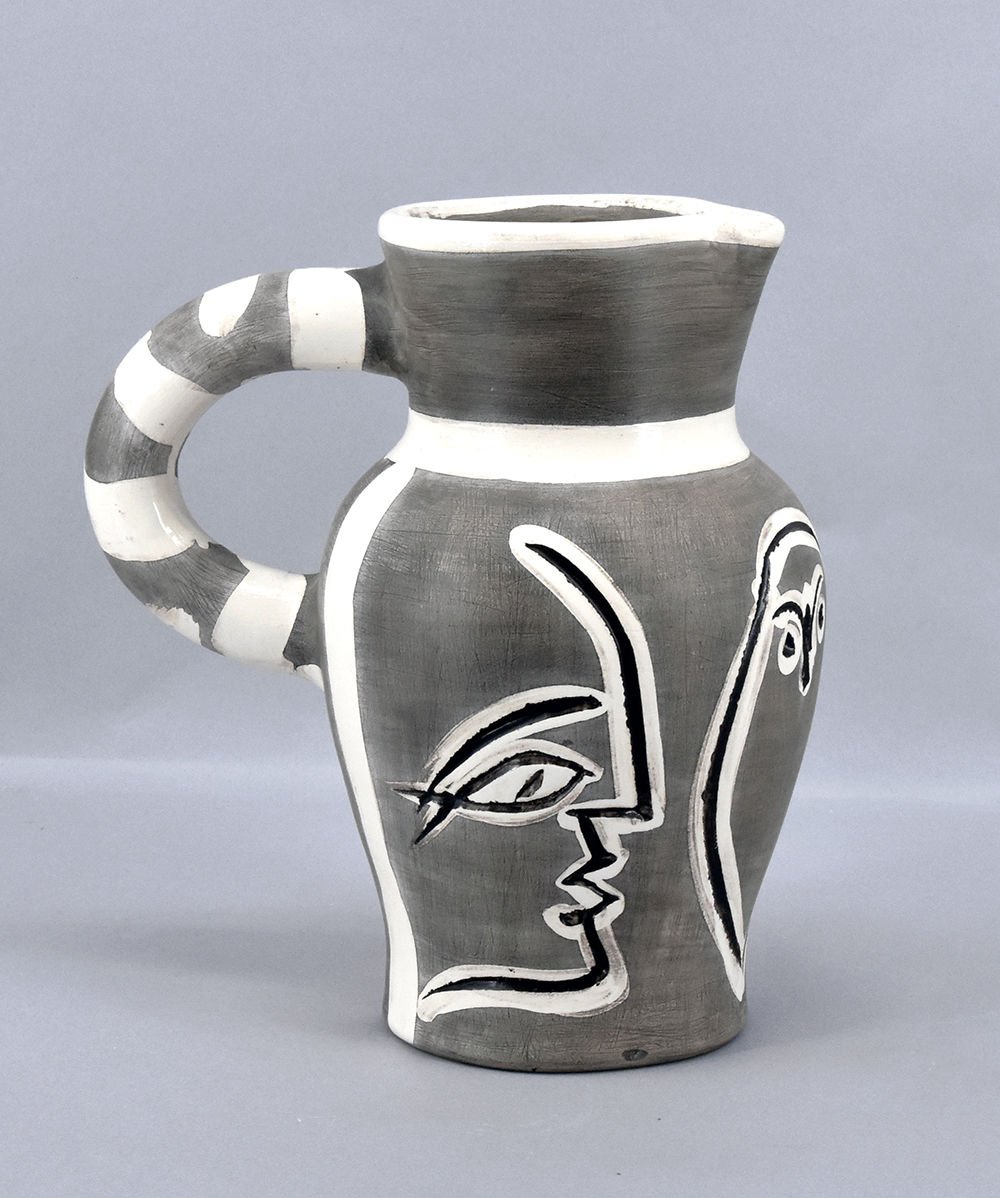 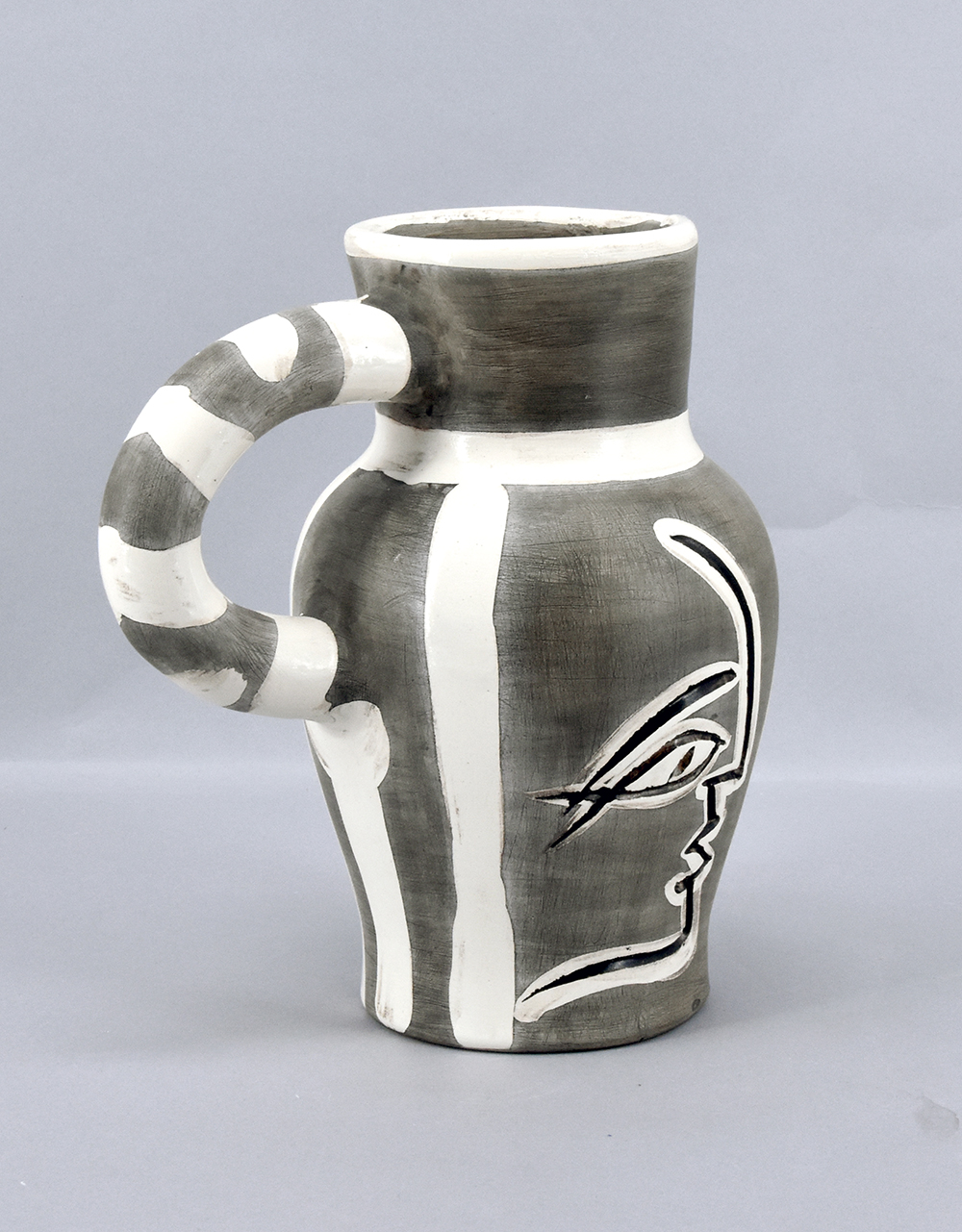 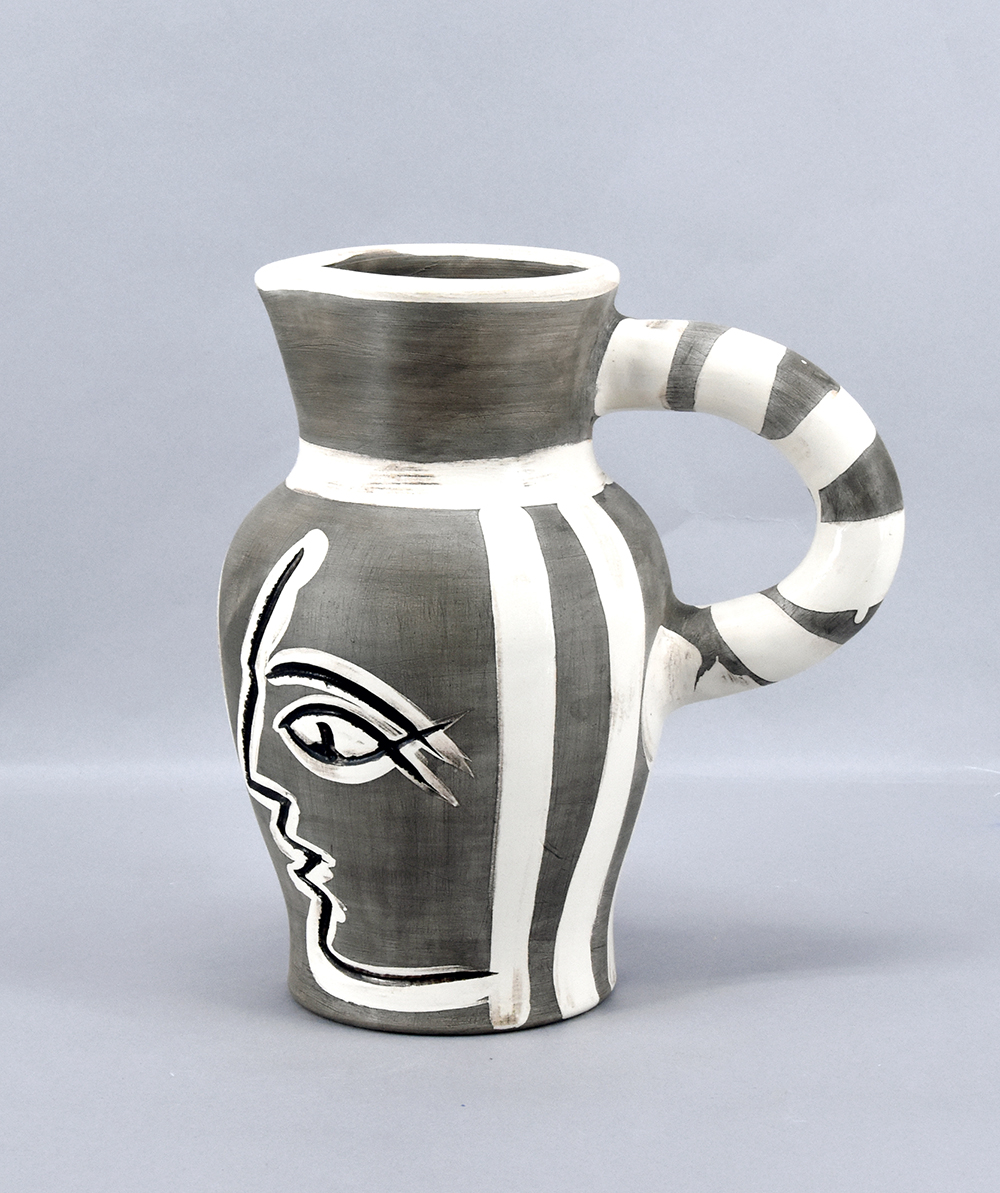 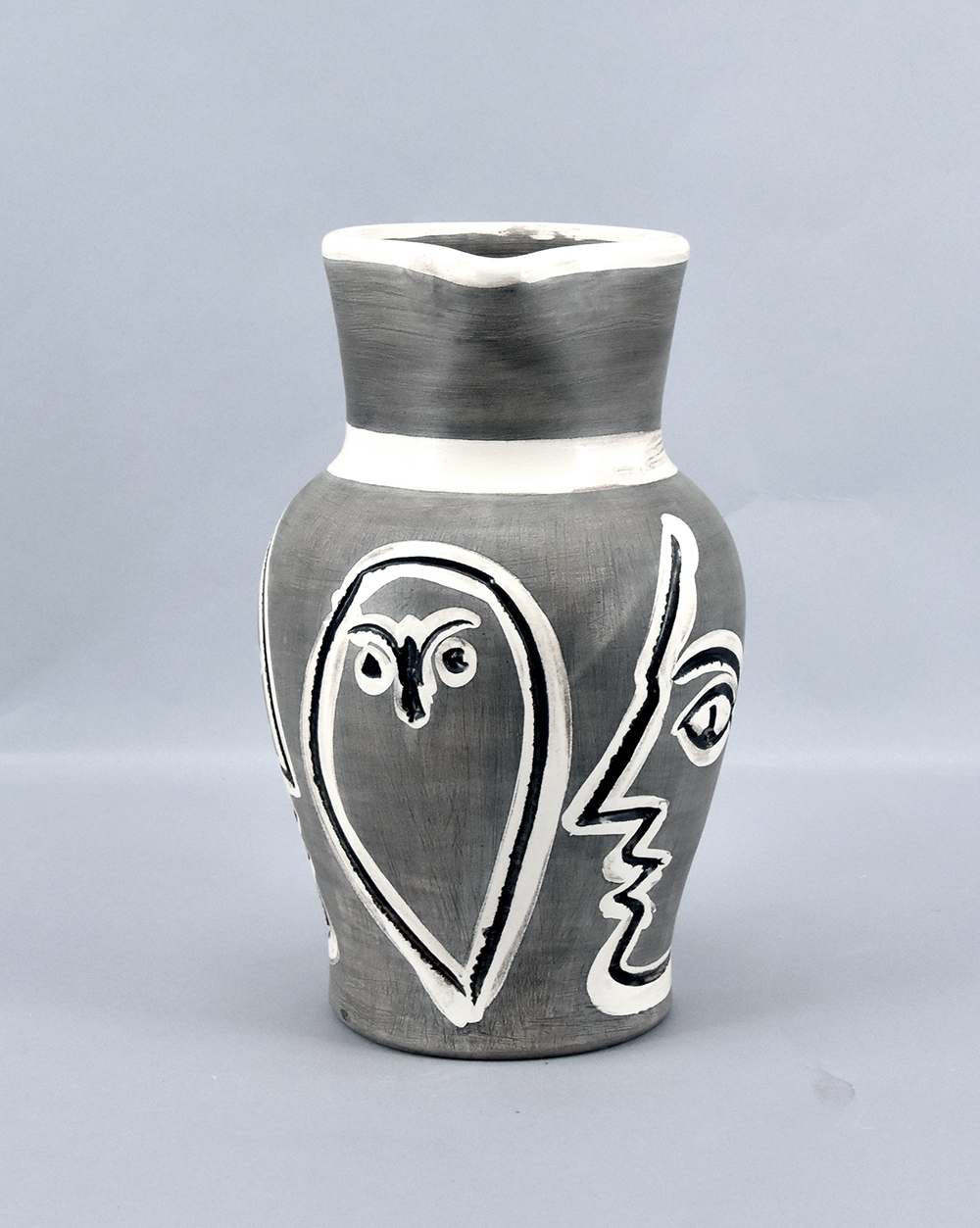 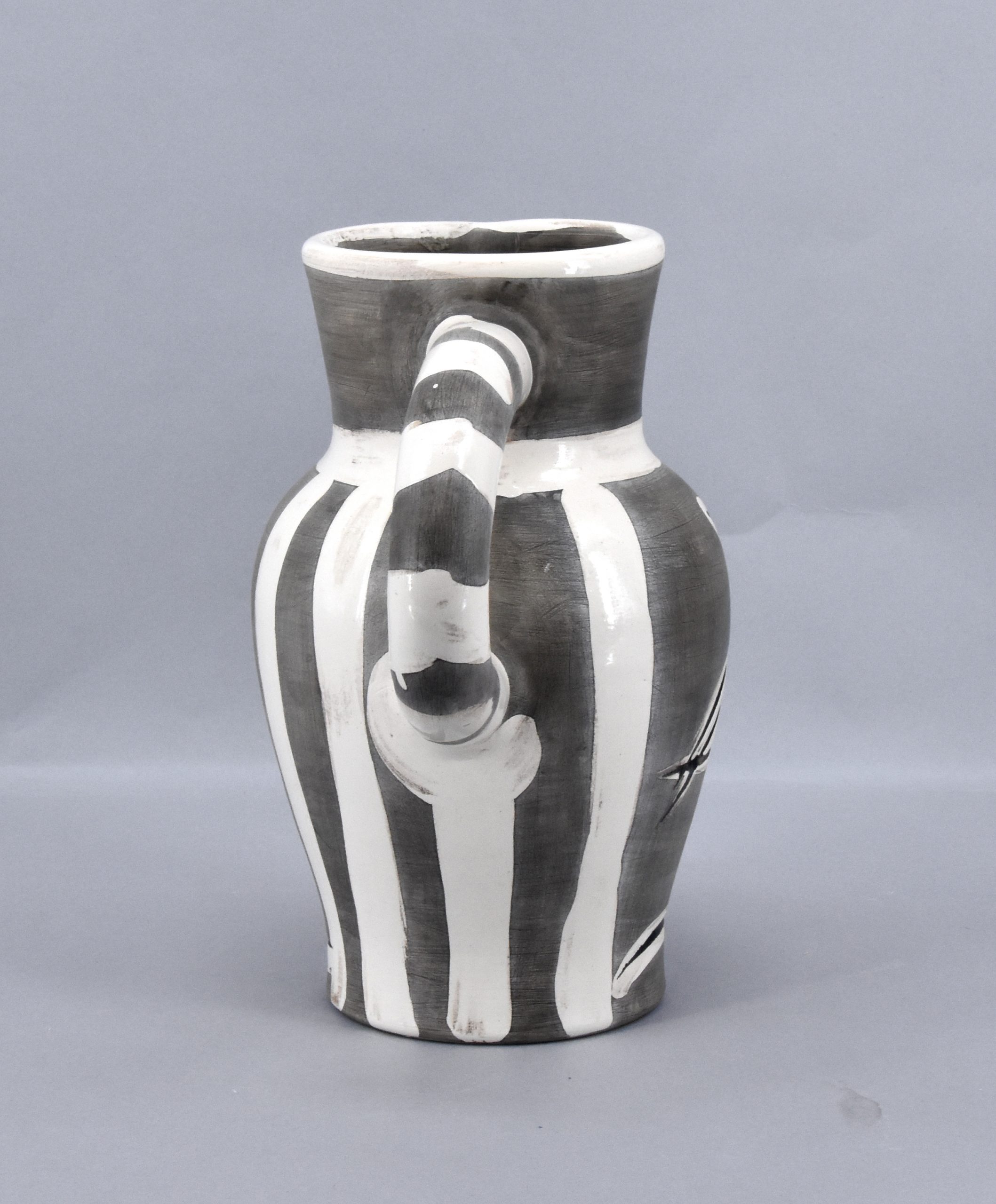 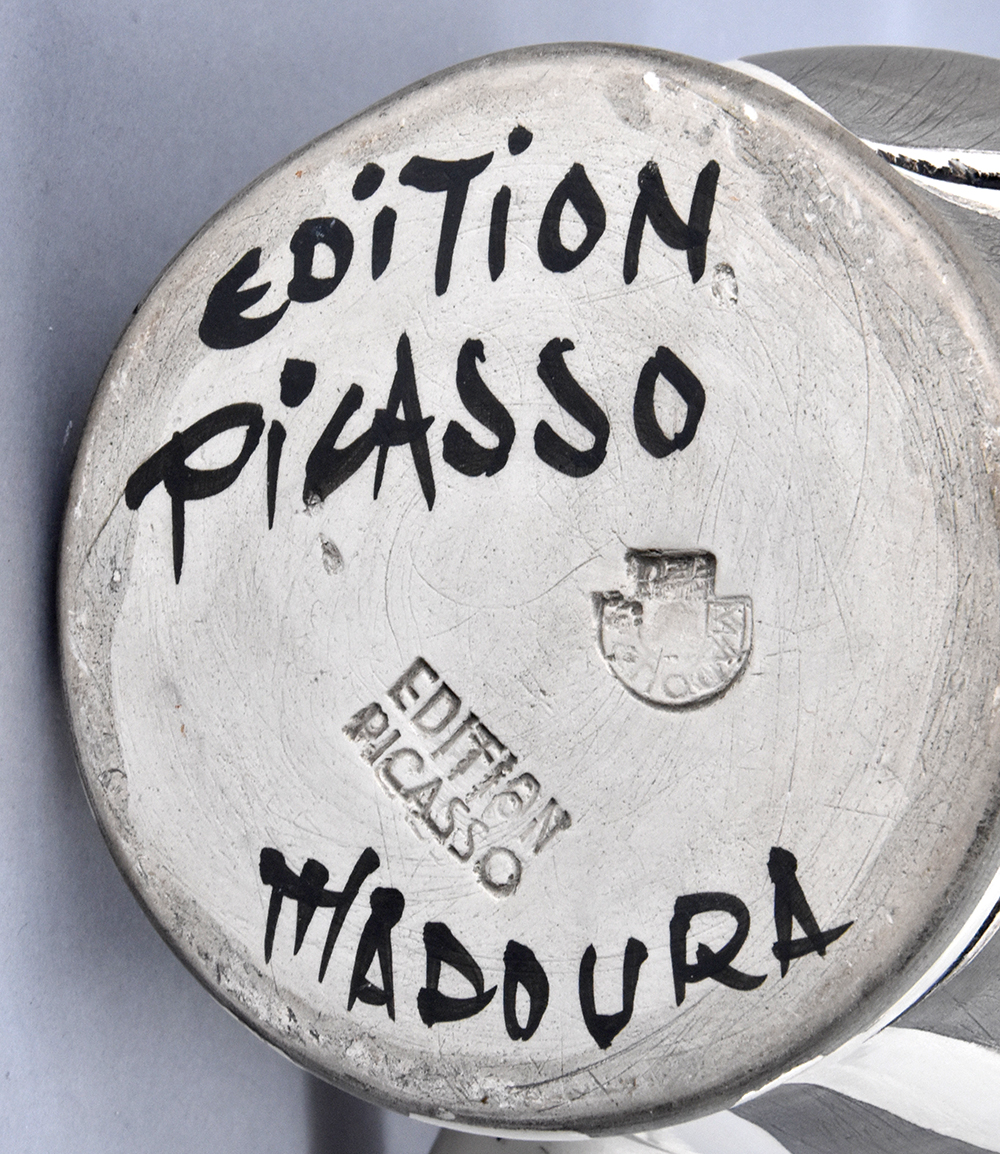 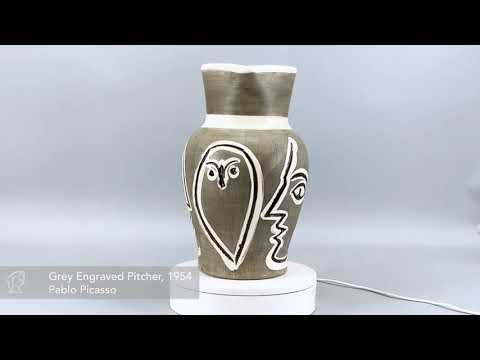 This exquisite pitcher, Pablo Picasso Ceramic Grey Engraved Pitcher, 1954, boasts simple, linear decoration and cool color contrasts between grey, white, and black. Opening their mouths in wonderment, two humans, conveyed in profile, gaze in fascination at a centrally located oval-shaped owl. The owl, depicted head-on, appears calm and restful, as though he is unaware of the humans bookended at his sides. The owl is rendered in simple lines, but the depiction is anything but simplistic. Picasso was familiar with owls, and they feature often in his work. He, in fact, owned a pet owl which was the subject of many of his ceramics. One can imagine, perhaps, that the owl depicted on Grey Engraved Pitcher might be that very same bird, and that we are gazing upon the ghost of Picasso's pet owl. The partial glaze of the piece plays with light and shadow, causing the pitcher to glisten when viewed from certain angles. The alternating grey and white stripes on the handle along with the white stripes around the circular opening and the neck, add a somewhat optical and abstract element to this grey engraved pitcher.

Created in 1954, this turned pitcher is hand crafted of white earthenware clay with decoration in engobes (black, white, and grey patina). With 'MADOURA PLEIN FEU' and 'EDITION PICASSO'stamps on the underside of the pitcher, this work is from the total edition of 500.

Catalogue Raisonné & COA:
Pablo Picasso Ceramic Grey Engraved Pitcher, 1954 is fully documented and referenced in the below catalogue raisonnés and texts (copies will be enclosed as added documentation with the invoices accompanying the final sale of the work):

1. Ramié, Alain. Picasso Catalogue of the edited ceramic works 1947-1971. Madoura: Galerie Madoura, 1988. Listed and illustrated as catalogue raisonné no. 246.
2. A Certificate of Authenticity will accompany this work.