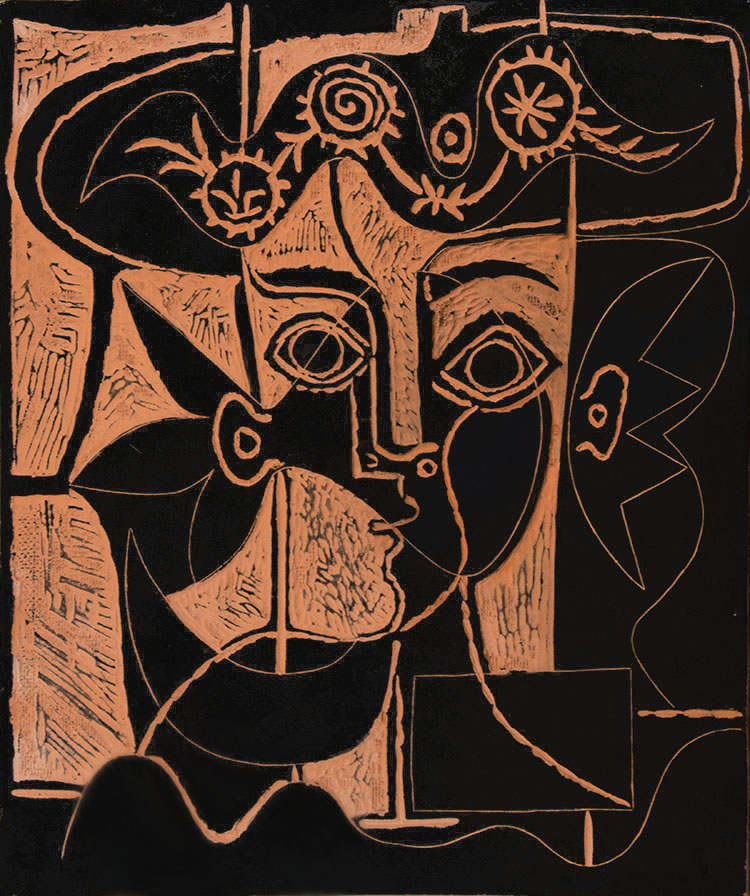 Pablo Picasso (Málaga, 1881 – Mougins, 1973) Grande Tête De Femme Au Chapeau Orné (Woman’s Big Head with Decked Hat), 1964 A.R. 518 is a remarkable and beautiful work. It represents Picasso’s most important relationships at the time, namely his artistic partnership with the Ramiés and his romance with Jacqueline Roque. It is also notably one of two ceramic works Picasso has ever made of this scale. Picasso takes immense care in depicting this portrait of his greatest muse Jacqueline; its wonderful texture and delicate variations in line weight are testaments to the artist’s innate creative skill.

Composed of a simple linear carved design in an earth tone clay plaque, Picasso takes advantage of the natural earth tones of clay to create a warm, nuanced work with contrasting black engobe. The plaque is impressed on plaster matrix and cast from an original engraving on linoleum, producing a final image that is reminiscent of a linocut. Carved from the surface of a clay plaque in a complicated stylization, a wide-eyed Jacqueline gazes at the viewers with distinct purpose and character. The simplicity of this work exhibits the artist's skill in creating a visual story with minimal manipulation of the earthenware clay.

Created in 1964, this red earthenware clay big rectangular plaque printed with engobe pad is from the edition of 50. This work is stamped with the 'MADOURA PLEIN FEU’ and ‘EMPREINTE ORIGINALE DE PICASSO’ stamps on the reverse.

Pablo Picasso (Málaga, 1881 – Mougins, 1973) Grande Tête De Femme Au Chapeau Orné (Woman’s Big Head with Decked Hat), 1964 A.R. 518 is fully documented and referenced in the below catalogue raisonnés and texts (copies will be enclosed as added documentation with the invoices that will accompany the sale of the work).