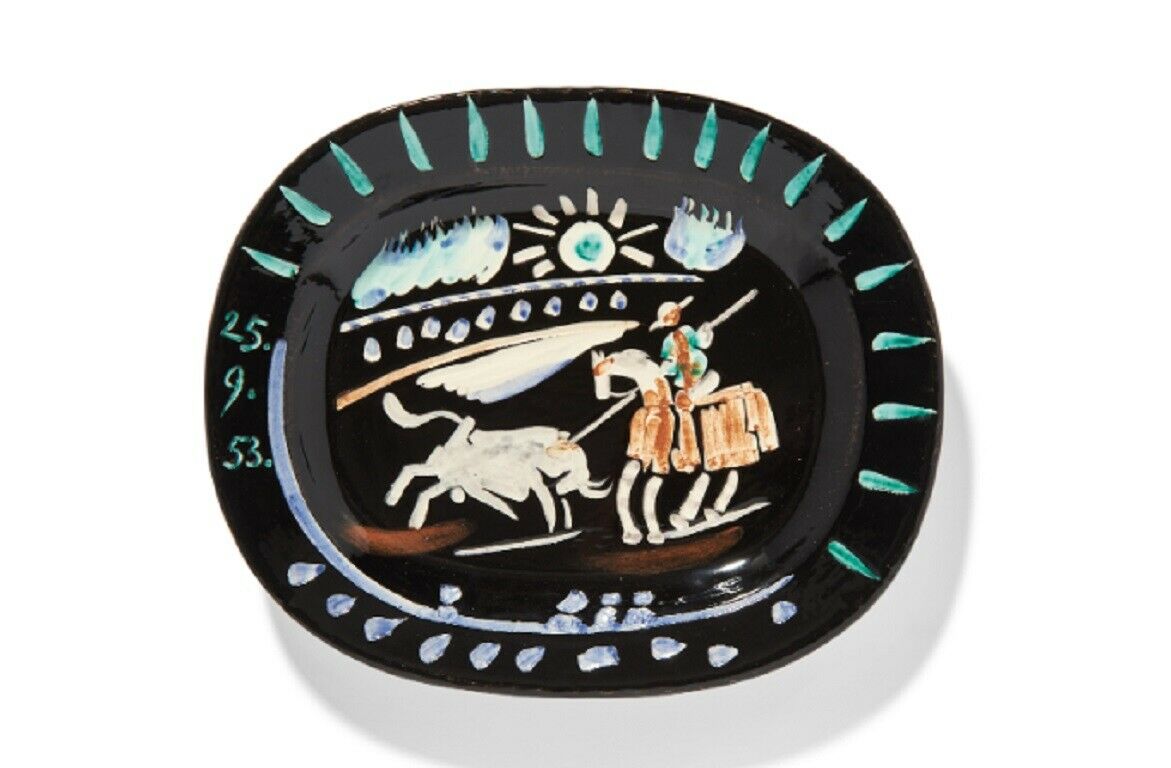 Pablo Picasso Corrida soleil (Corrida sun), 1953 features the climactic moment when a bullfighter deals the final blow to the bull in a corrida or bullfight. The slightly tilted composition of the scene lends dynamism and movement to the figures of the bullfighter and the prancing bull. A row of dots slopes over the dueling pair, resembling the heads of spectators in the stands of a bullfighting arena. The stylized sun has a teal hue at the center outlined in pale yellow with lines of the same hue radiating out from it to indicate the rays of the sun. Picasso's fascination with bullfighting manifested itself in a number of his ceramic works, but the jet black base of Pablo Picasso Corrida soleil (Corrida sun), 1953 makes the details on this particular ceramic so bold and forceful. The lightly rendered figures and stylized setting pop out against the black background and evoke the heightened energy of this critical moment in a bullfight.

Created in 1953, Pablo Picasso Corrida soleil (Corrida sun), 1953 is a dish of white earthenware clay with decoration in engobes (green, blue, red, white, and black) and knife engraved under glaze. This work is from the edition of 100.

Catalogue Raisonné & COA:
Pablo Picasso Corrida soleil (Corrida sun), 1953 is fully documented and referenced in the below catalogue raisonnés and texts (copies will be enclosed as added documentation with the invoices that will accompany the sale of the work):

1. Ramié, Alain. Picasso Catalogue of the edited ceramic works 1947-1971. Madoura: Galerie Madoura, 1988. Listed and illustrated as catalogue raisonné no. 199.
2. A Certificate of Authenticity will accompany this work.