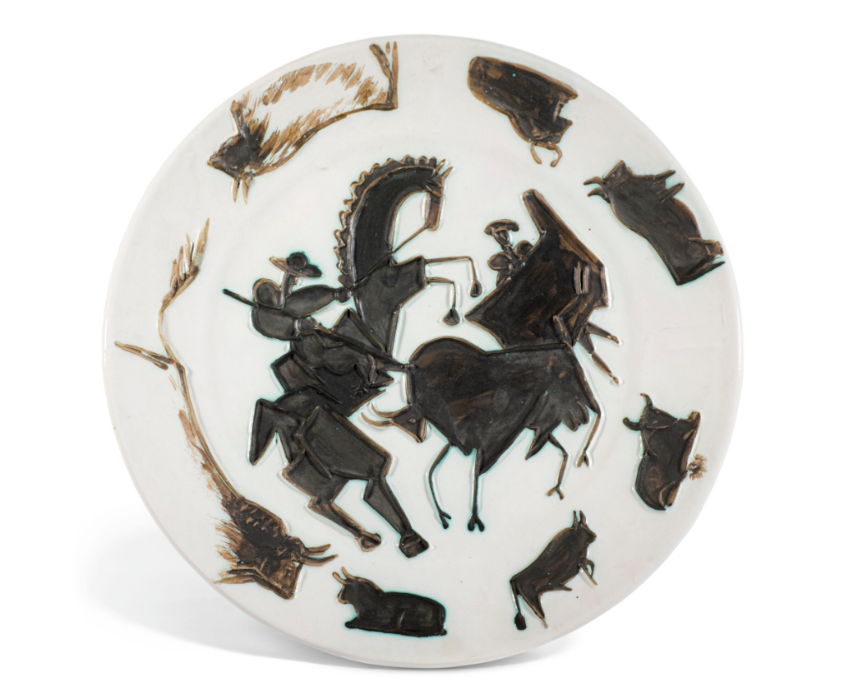 Pablo Picasso ceramic Corrida (Bullfight), 1953 A.R. 182 illustrates a dynamic representation of the multiple players involved in a bullfight. The picador angles his spear downward while riding astride his horse as the bull charges into the spear to its demise.  To the right of the bull stands a matador with a cape outstretched to taunt and rally the bull. The danger and thrill of bullfighting made its way into much of Picasso's oeuvre, but the ceramic plates provide the perfect surface for depicting a bull fight: the structure of the plate has a ring built into it with the outer rim emulating the outer limits of a bullfighting arena. In Pablo Picasso ceramic Corrida (Bullfight), 1953 A.R. 182, the outer rim features a series of bull silhouettes, both sitting and standing, that frame the cluster of action at the center. Some of the bulls are fully filled in solid color, while others remain outlines or partially filled in figures. Such details also attest to Picasso's fascination with bulls themselves.

Created in 1953, Pablo Picasso Corrida (Bullfight), 1953 A.R. 182 is a round dish of white earthenware clay with oxidized paraffin decoration (brown, green) and a white enamel bath. This work is from the edition of 200.

Catalogue Raisonné & COA:
Pablo Picasso ceramic Corrida (Bullfight), 1953 A.R. 182 is fully documented and referenced in the below catalogue raisonnés and texts (copies will be enclosed as added documentation with the invoices that will accompany the sale of the work):

1. Ramié, Alain. Picasso Catalogue of the edited ceramic works 1947-1971. Madoura: Galerie Madoura, 1988. Listed and illustrated as catalogue raisonné no. 182.
2. A Certificate of Authenticity will accompany this work.