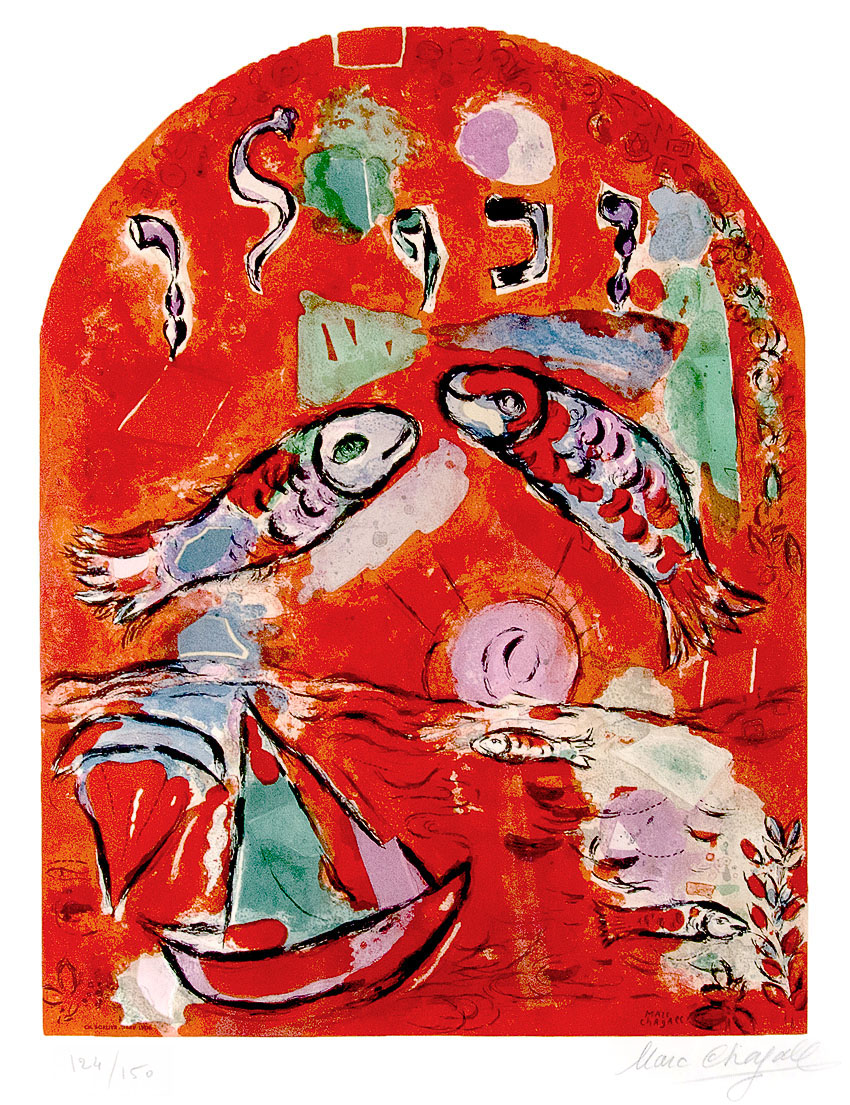 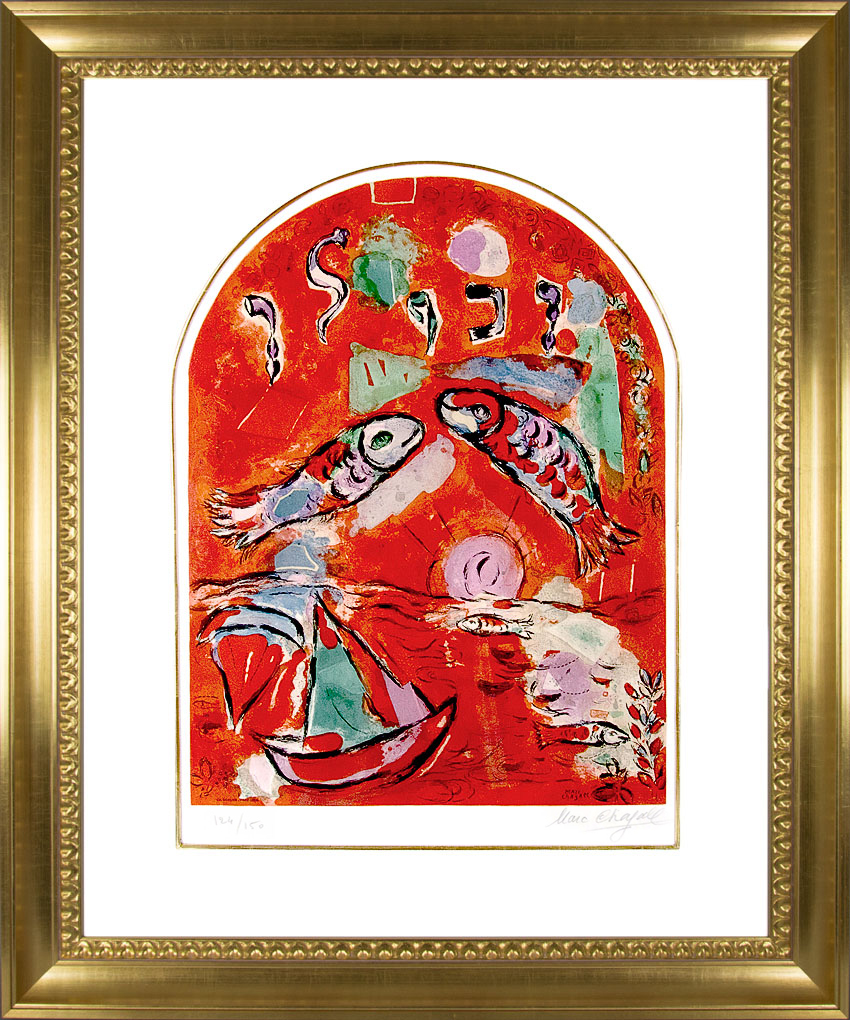 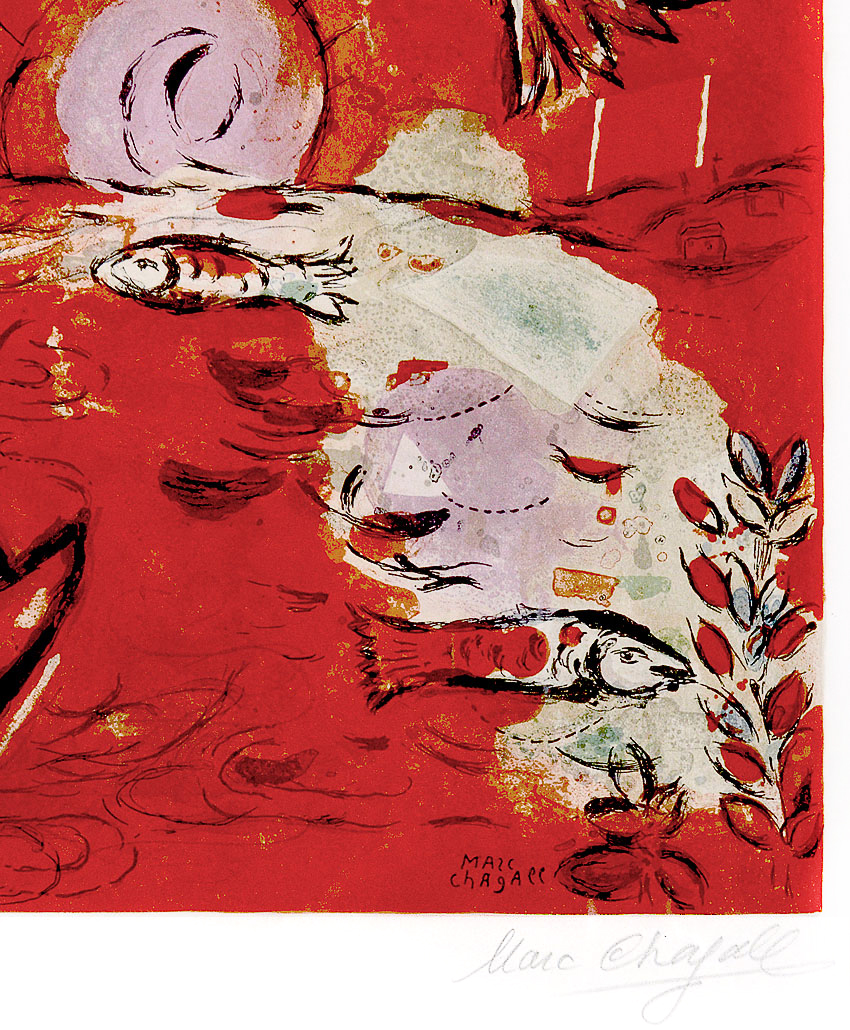 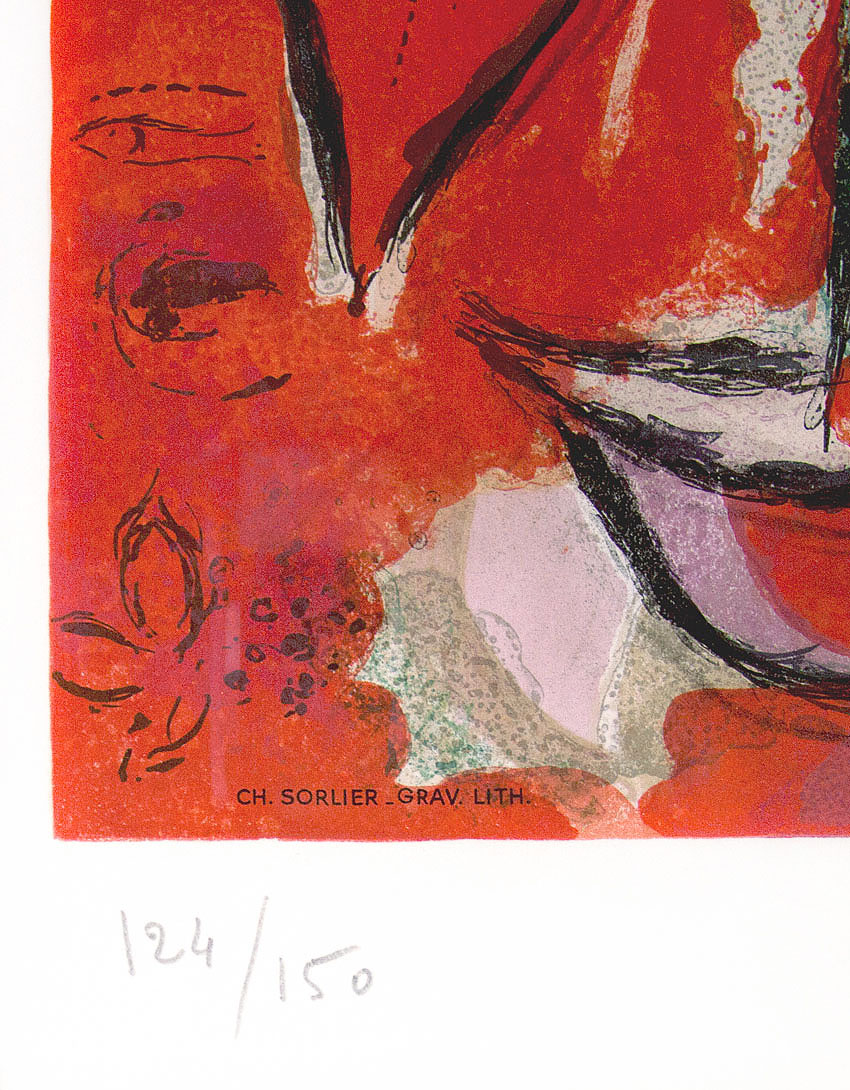 According to Jean Leymarie:
"Issachar and Zebulun, the two youngest children of Leah, are joined together in the blessing of Moses who assigns to the two tribes a prosperous destiny….Jacob blessed Zebulun and Issachar separately, giving the priority to Zebulun…He predicted for him a maritime vocation, and designated him as 'an haven of ships; and his border shall be unto Zion.' The ship is the usual symbol for Zebulun. (77)"

Aligning with the maritime vocation affiliated with Zebulun, Chagall The Tribe of Zebulun is a strikingly bold work featuring subjects of the sea. Harmoniously balanced and brilliantly colored in saturated hues of red, blue, green, and purple, this work depicts two fish leaping towards one another, their bodies forming a graceful arc at the center of the composition. Beneath them, a ship sails upon a slightly choppy sea, as the sun just begins to peak over the horizon. Across the top of the composition, snaking Hebrew letters spell out the work "Zebulun," further glorifying Leah's favored son.

Created in 1964, this image is one in a series of twelve lithographs. Commissioned by the Hadassah-Hebrew Medical Center, Chagall created these works as maquettes for a series of stained glass windows to be installed in the Center's synagogue outside of Jerusalem. The work was engraved by Charles Sorlier, who worked in close collaboration with the artist and is printed on watermarked Arches wove paper. This piece is numbered from the edition of 150 in the lower left (total edition of 150 proofs signed and numbered in Arabic numerals, 75 proofs signed and numbered in Roman numerals, and 10 artist's proofs). This work is hand signed by Marc Chagall (Vitebsk, 1887- Saint-Paul, 1985) in pencil in the lower right margin and signed in the stone, 'CH. SORLIER. GRAV. LITH.' at the lower left of the image.

Catalogue Raisonné & COA:
Marc Chagall The Tribe of Zebulun, 1964 is fully documented and referenced in the below catalogue raisonnés and texts (copies will be enclosed as added documentation with the invoice accompanying the final sale of the work).

About the Framing:
Marc Chagall The Tribe of Zebulun, 1964 is framed to museum-grade, conservation standards, presented in a complementary moulding and finished with silk-wrapped mats and optical grade Plexiglas.