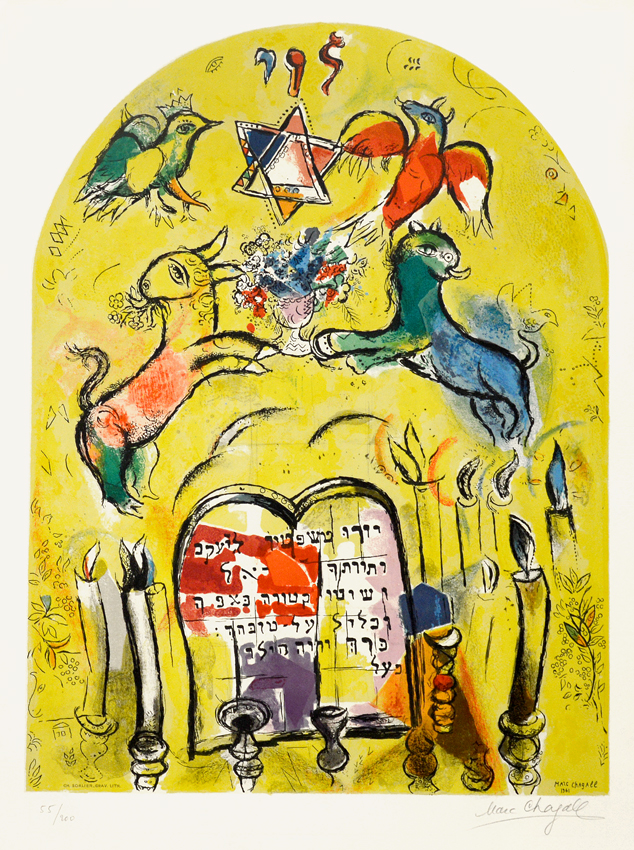 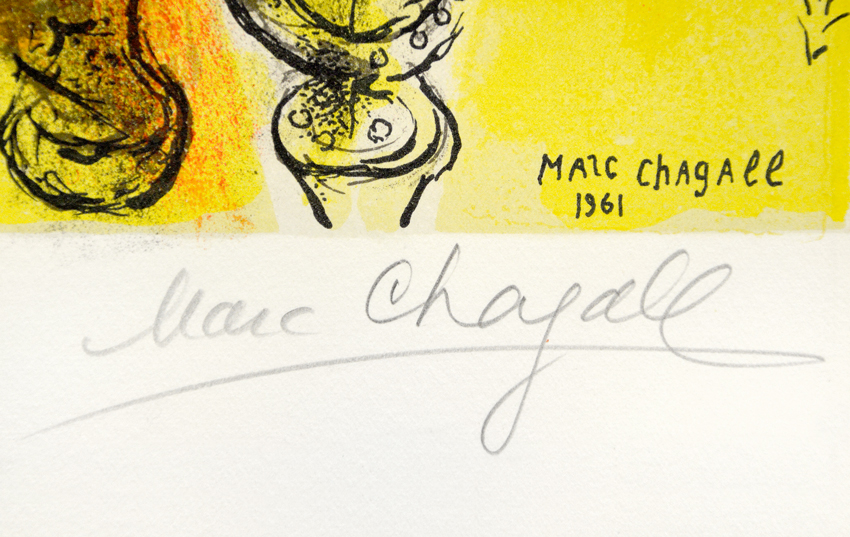 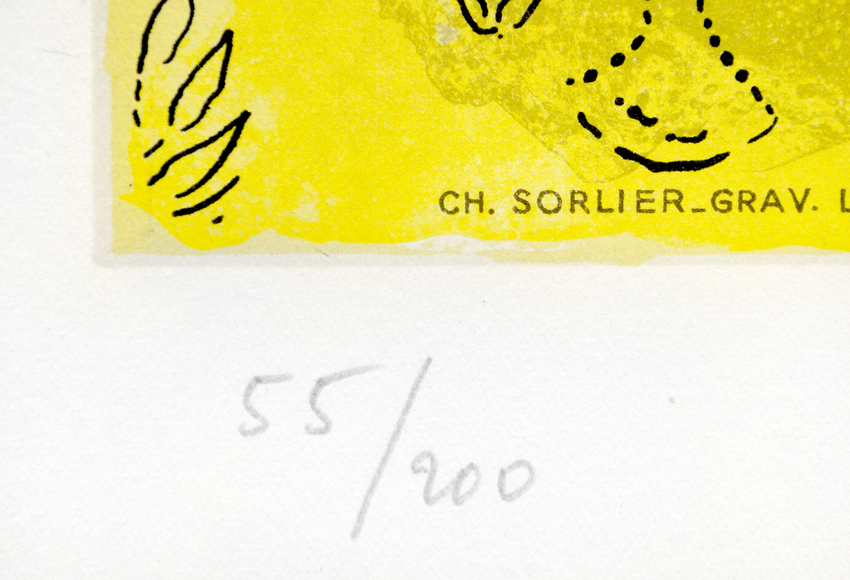 Created in 1964, The Tribe of Levi was part of a series of twelve lithographs which Chagall designed after the stain glass windows he created for the synagogue of the Hadassah-Hebrew Medical Center located just outside of Jerusalem.  The work was engraved and printed by Charles Sorlier in collaboration with Marc Chagall on Arches wove paper; in the lower left of the image, ‘CH. SORLIER_GRAV. LITH.’  On the lower right hand on the reverse side of the sheet, there is printed text which reads, ‘MARC CHAGALL | MAQUETTE DU VITRAIL ‘LEVI’ | pour Jérusalem’.  Hand signed by Marc Chagall (1887 – 1985) in pencil in the lower right margin; numbered from the edition of 200 in pencil in the lower left margin (aside from an edition of 150 signed and numbered in Arabic numerals and 75 in Roman numerals).

According to Jean Leymarie of The Jerusalem Windows:
“Around the Torah burn “like flamboyant jacinthes,” according to Chagall, the candles which generate a mystic light.  The two objects in the form of a candelabrum in front of the altar suggest, in addition, a possible allusion to the cup of the kiddush and the candlestick of the havdala. The four heraldic animals of the synagogue, embodying religious spirituality, whose bright colors emerge from the deep yellow background, frolic around a vase of offerings filled with flowers and fruits as well as around the star, emblem of David, the symbolic hexagram which has become the widespread symbol of Judaism today.  Its presence is anachronistic, but it is charged with an intense beauty.

“Chagall has magnificently animated the yellow ground, so difficult to make lustrous, by a continuous vibration of little details painted with lightness and delicacy, like oriental embroidery, and numerous accents of light.  Notice the use of silvered yellow and, in a portion of the stage, the Persian rose-gold (17).”

Catalogue Raisonné & COA:
Marc Chagall The Tribe of Levi (from The Twelve Maquettes of Stained Glass Windows for Jerusalem), 1964 is fully documented and referenced in the below catalogue raisonnés and texts (copies will be enclosed as added documentation with the invoice accompanying the final sale of the work).
1)    Leymarie, Jean, Marc Chagall The Jerusalem Windows, 1975, listed on pages 17-23.

About the Framing:
Marc Chagall The Tribe of Levi (from The Twelve Maquettes of Stained Glass Windows for Jerusalem), 1964 is framed to museum-grade, conservation standards, presented in a complementary moulding and finished with silk-wrapped mats and optical grade Plexiglas.