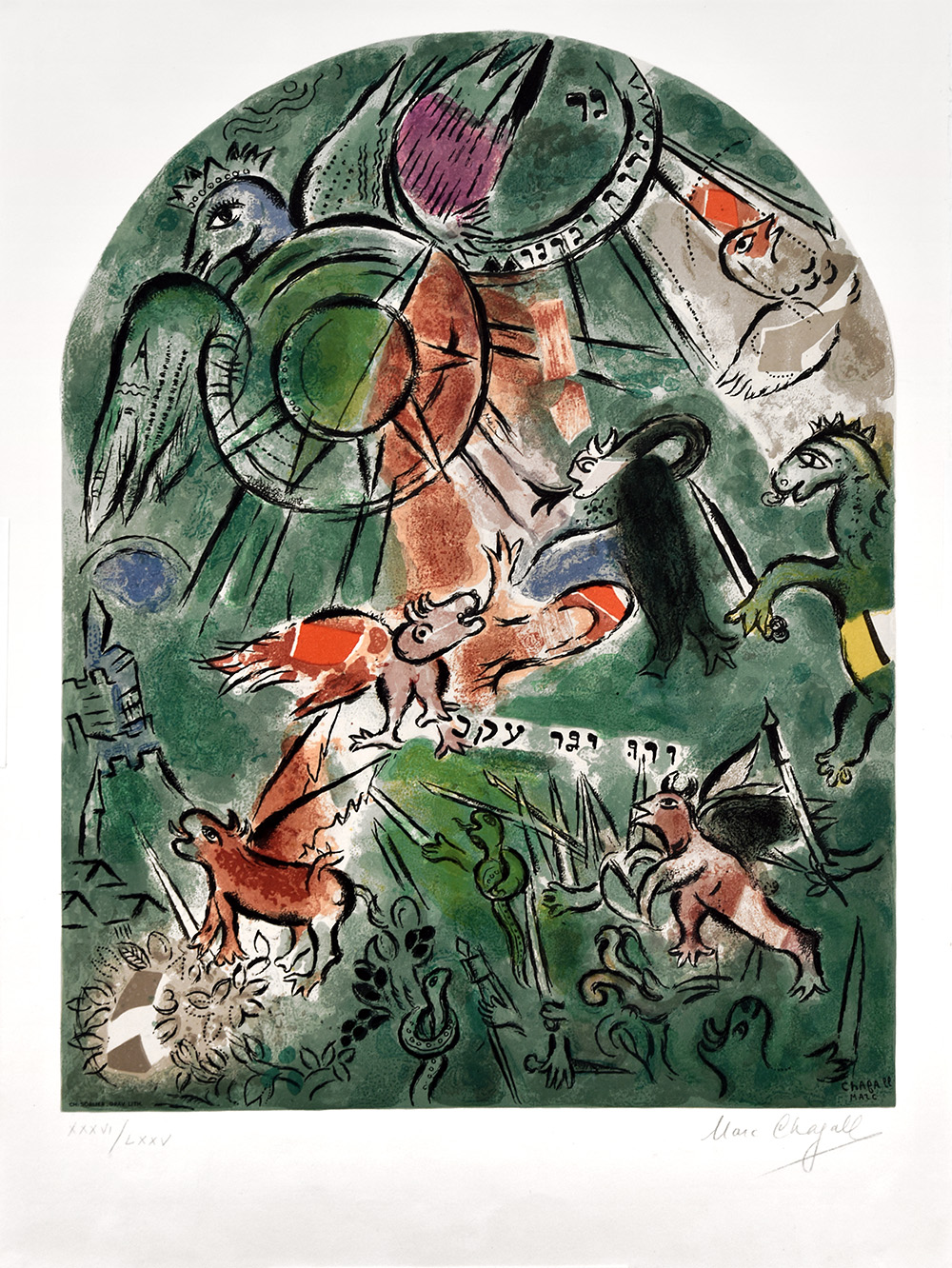 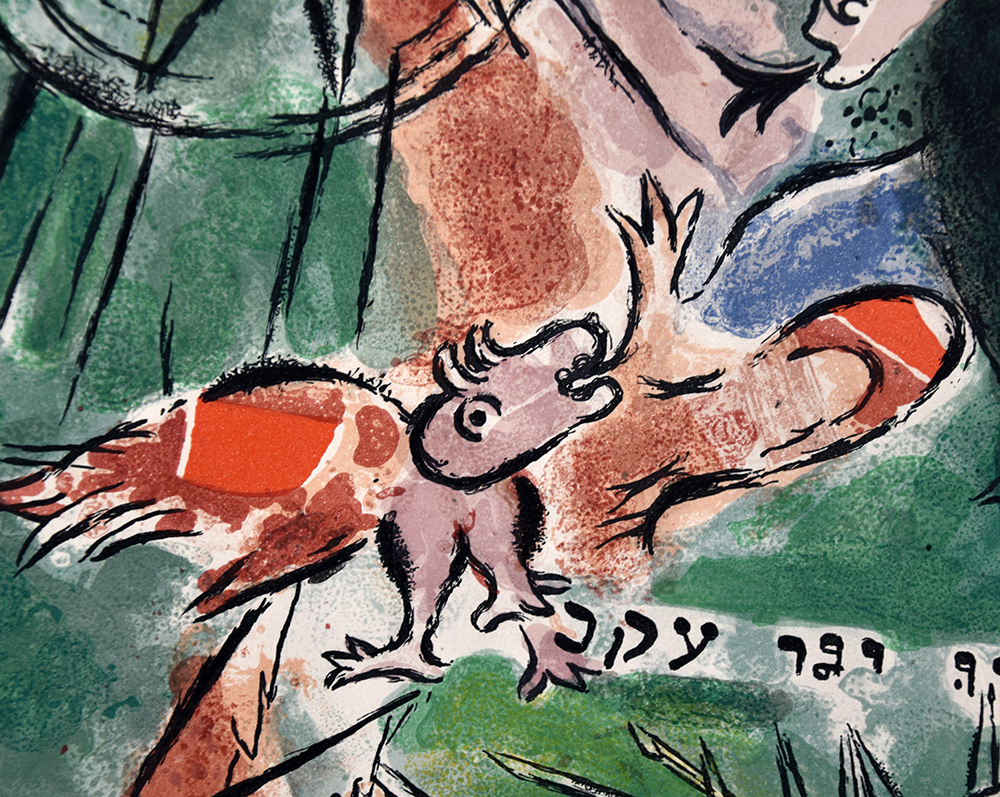 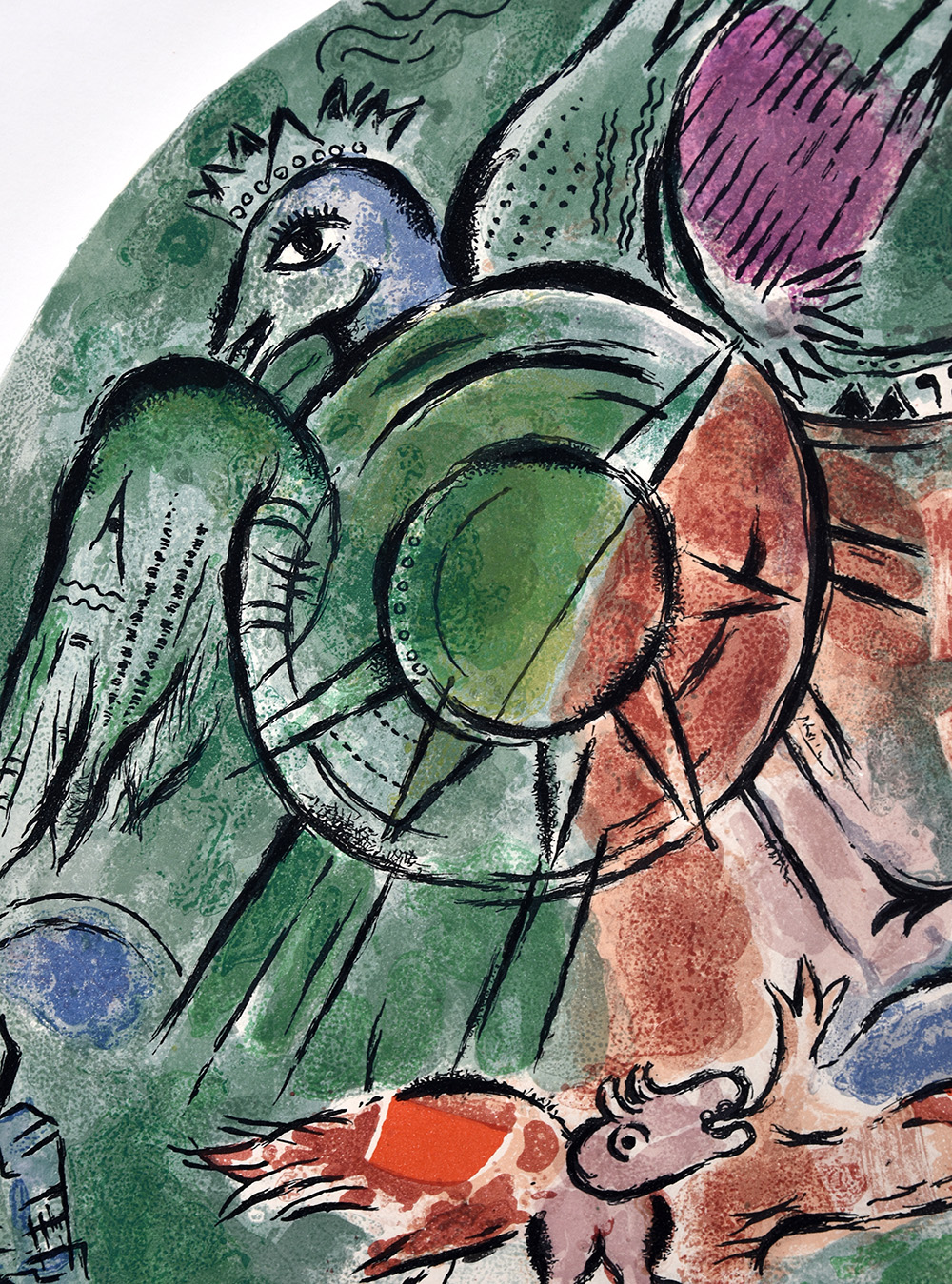 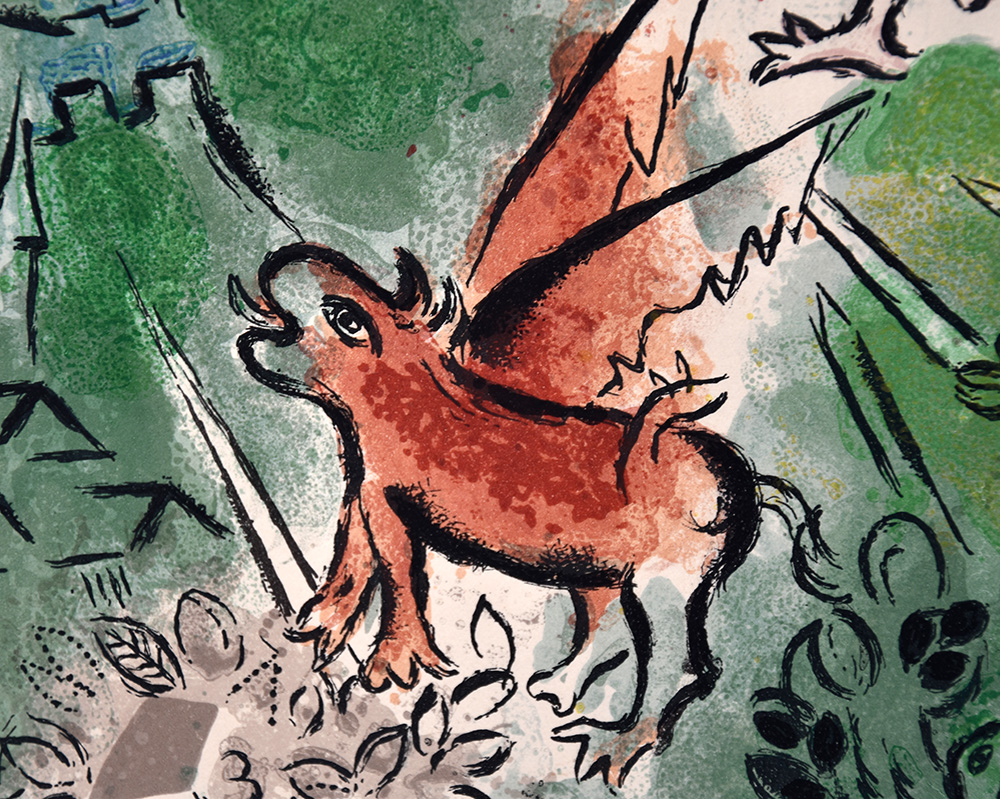 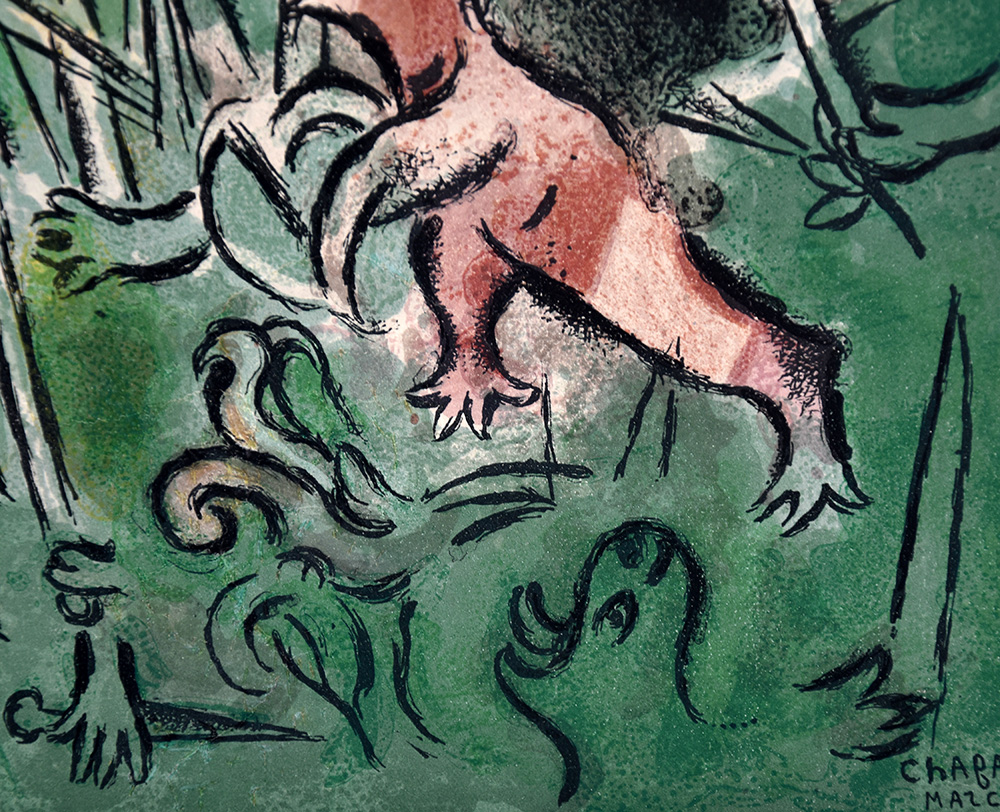 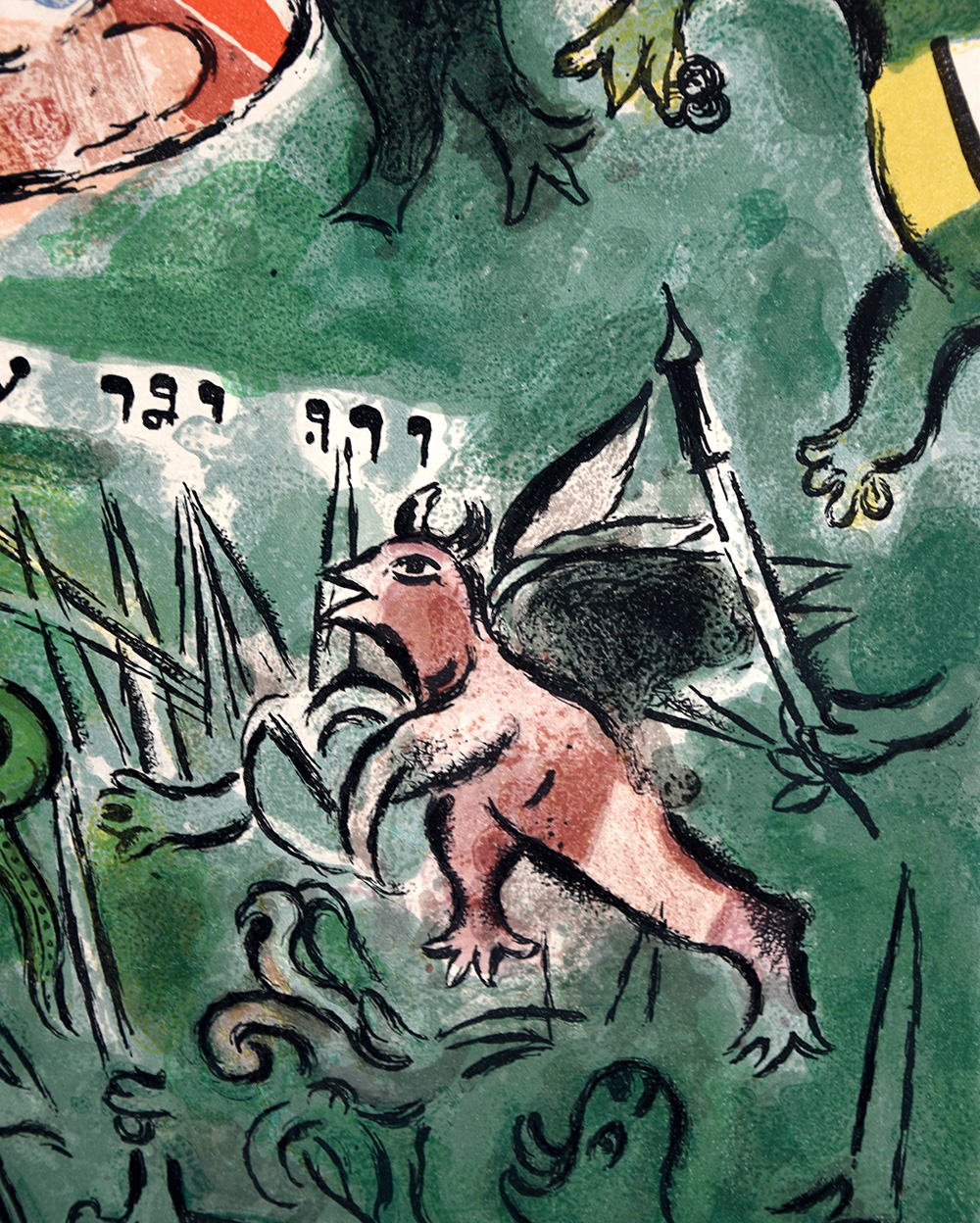 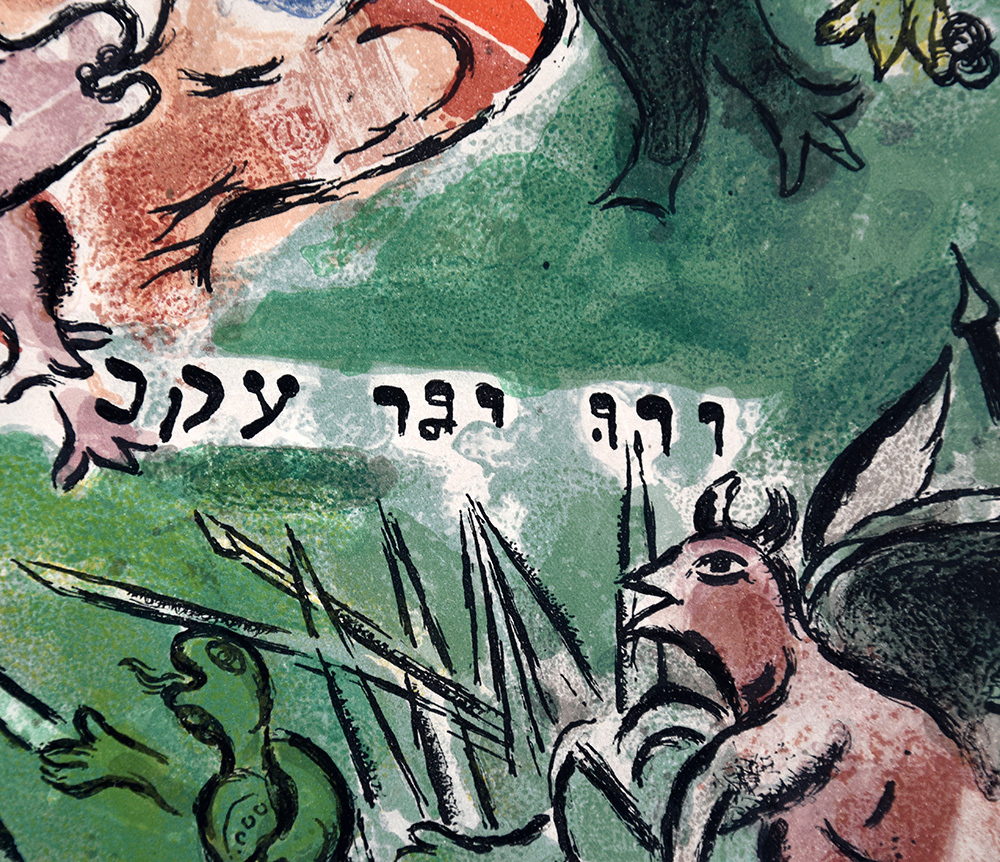 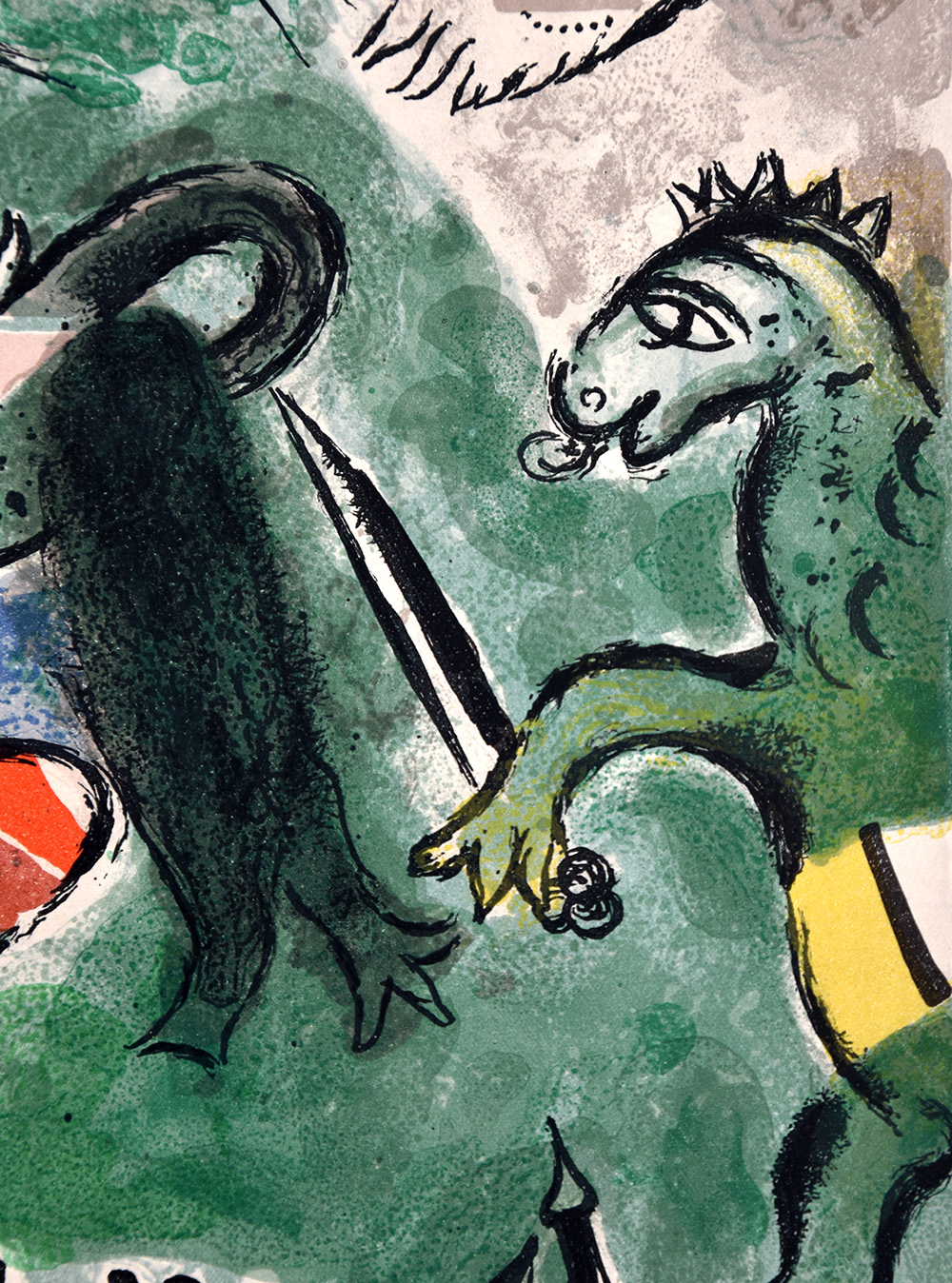 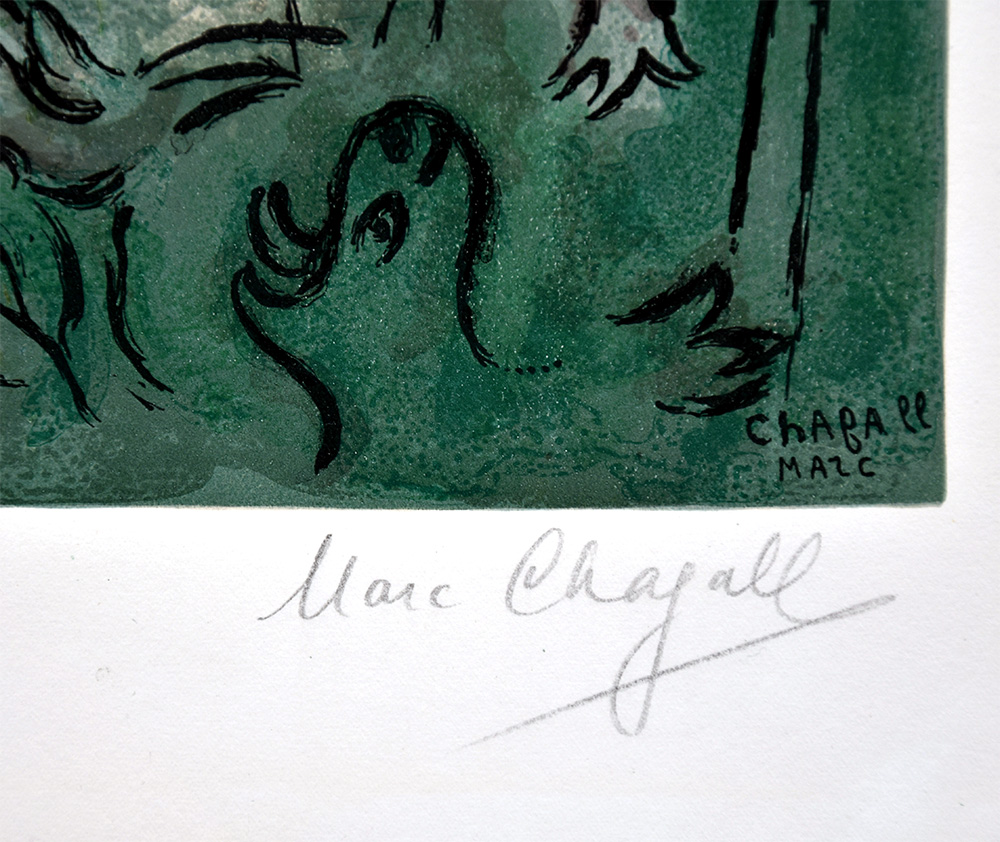 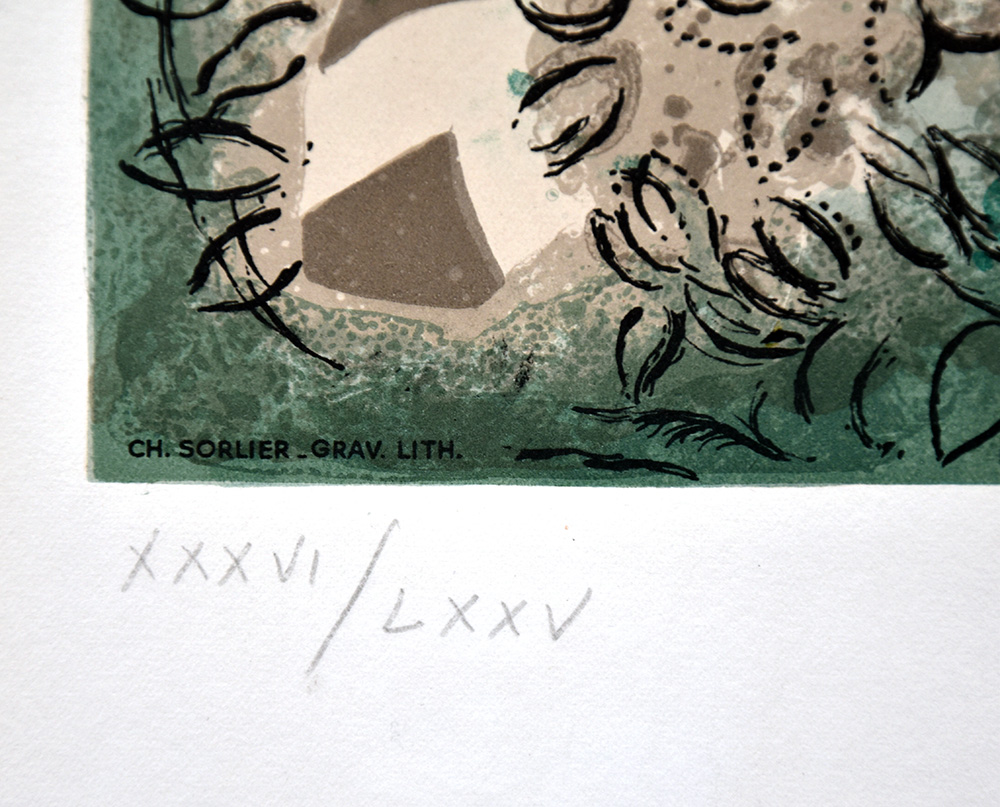 Marc Chagall The Tribe of Gad (from The Twelve Maquettes of Stained Glass Windows for Jerusalem), 1964 radiates the artist's spiritual conviction, honoring one of the tribes that, with the dying Jacob's blessing, settled the land of Canaan. Over multiple visits to Palestine, Chagall gathered images imbued with the light of the Holy Land. When he was commissioned to create twelve stained glass windows for a synagogue outside of Jerusalem, he met the challenge to translate his masterful graphic work into a new medium. Tracing its lineage back to Gad, the son of Leah's servant, the tribe of Gad is known for its unwavering self-defense, cited in Genesis 49 : 19: "Gad, a troop shall overcome him : but he shall overcome the last." Jean Leymarie notes how Chagall valorizes these famed warriors. Blood reds and muted greens flood the lithograph, whose fragmented composition boils with the energy of battle, bristling with spears and shields (114).

Created in 1964, this image is one in a series of twelve lithographs. Commissioned by the Hadassah-Hebrew Medical Center, Chagall created these works as maquettes for a series of stained glass windows to be installed in the Center's synagogue outside of Jerusalem. The work was engraved by Charles Sorlier, who worked in close collaboration with the artist and is printed on watermarked Arches wove paper. This piece is numbered from the edition of 150 in the lower left (total edition of 150 proofs signed and numbered in Arabic numerals, 75 proofs signed and numbered in Roman numerals, and 10 artist's proofs). This work is hand signed by Marc Chagall (Vitebsk, 1887- Saint-Paul, 1985) in pencil in the lower right margin and signed in the stone, 'CH. SORLIER. GRAV. LITH.' at the lower left of the image.

Catalogue Raisonné & COA:
Marc Chagall The Tribe of Gad (from The Twelve Maquettes of Stained Glass Windows for Jerusalem), 1964 is fully documented and referenced in the below catalogue raisonnés and texts (copies will be enclosed as added documentation with the invoice accompanying the final sale of the work).

About the Framing:
Marc Chagall The Tribe of Gad (from The Twelve Maquettes of Stained Glass Windows for Jerusalem), 1964 is framed to museum-grade, conservation standards, presented in a complementary moulding and finished with silk-wrapped mats and optical grade Plexiglas.