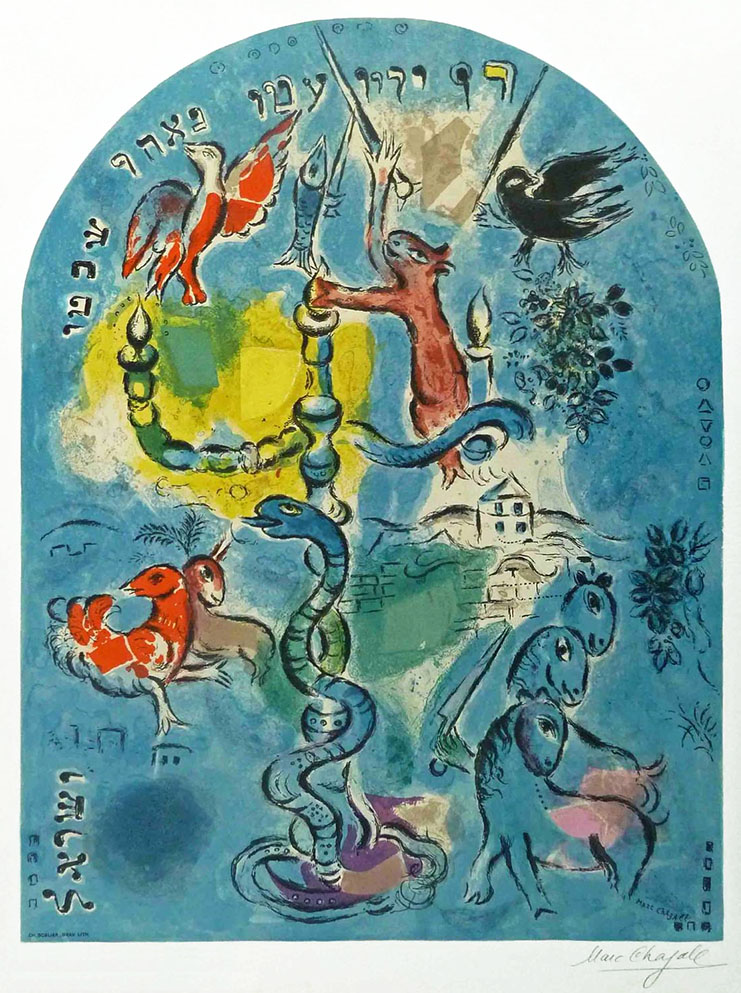 Marc Chagall The Tribe of Dan, from The Twelve Maquettes of Stained Glass Windows for Jerusalem, 1964 is one of 12 lithographs in The Twelve Maquettes of Stained Glass Windows for Jerusalem. The Tribe of Dan with its stunning blue hues and diversity of subjects is perhaps one of the most captivating in the series. Jean Leymarie states of this artwork, “A majestic three-branched candelabrum forms the central axis of this predominantly dark-blue composition. It rises both as the tree of life and as the tree of justice, and perhaps also as a symbol of sovereignty. Its flaming lights create an area of diffused yellow between the red animals, compensated by a green space below. Around the candelabrum twines the horned viper, dangerous serpent of the desert, which strikes suddenly at anything which comes near and makes horses rear back in fright…Between the branches of the candelabrum rises a vermilion lion cub, in a traditional pose. His right paw, which becomes the hand of justice, holds the sword of war, which also serves as the beam for a scales” (p. 101-102).

Created in 1964, this image is part of a series of twelve lithographs which Chagall designed after the stain glass windows he created for the synagogue of the Hadassah-Hebrew Medical Center, located just outside of Jerusalem. The work was engraved and printed by Charles Sorlier in collaboration with Marc Chagall on watermarked Arches wove paper. This piece is numbered from the edition of 150 in pencil in the lower left margin (there was also an edition of 75 numbered in Roman numerals).This piece is hand signed by by Marc Chagall (Vitebsk, 1887- Saint-Paul, 1985) in pencil in the lower right margin and signed in the stone in the lower right of the image. Also signed ‘CH. SORLIER. GRAV. LITH. in the stone in the lower left of the image.

Catalogue Raisonné & COA:
Marc Chagall The Tribe of Dan, from The Twelve Maquettes of Stained Glass Windows for Jerusalem, 1964 is fully documented and referenced in the below catalogue raisonnés and texts (copies will be enclosed as added documentation with the invoices that will accompany the final sale of the work).

ABOUT THE FRAMING:
Framed to archival museum grade conservation standards, Marc Chagall The Tribe of Dan, from The Twelve Maquettes of Stained Glass Windows for Jerusalem, 1964 is framed in a complementary moulding with silk mats and optical grade Plexiglas.