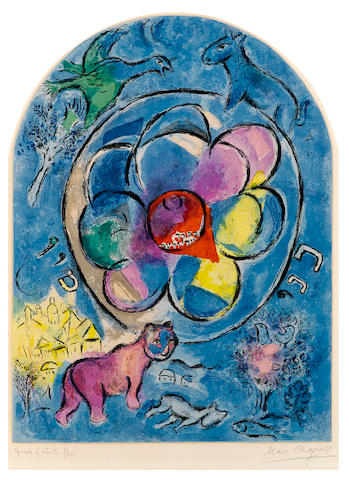 Marc Chagall The Tribe of Benjamin (From Twelve Maquettes of Stained Glass Windows), 1964 bursts with rainbows of bright color. On an azure stained background exciting features stand out. The sunny yellow town lies happily next to a purple animal. Central to the image is a rosette colored brilliantly with red, purple, green, and yellow. The rich work supports the full narrative tradition of the tribes.

Created in 1964, this image is one in a series of twelve lithographs. Commissioned by the Hadassah-Hebrew Medical Center, Chagall created these works as maquettes for a series of stained glass windows to be installed in the Center’s synagogue outside of Jerusalem. The work was engraved by Charles Sorlier, who worked in close collaboration with the artist and is printed on watermarked Arches wove paper. An artist’s proof inscribed ‘epreuve d’artiste’ and numbered 8/25 in pencil in the lower left margin; aside from the numbered edition of 150 in Arabic numerals and the edition of 75 numbered in Roman numerals; published by Mourlot, Paris. This work is hand signed by Marc Chagall (Vitebsk, 1887- Saint-Paul, 1985) in pencil in the lower right margin and signed in the stone, ‘CH. SORLIER. GRAV. LITH.’ at the lower left of the image.

Marc Chagall The Tribe of Benjamin (From Twelve Maquettes of Stained Glass), 1964 is fully documented and referenced in the below catalogue raisonnés and texts (copies will be enclosed as added documentation with the invoice accompanying the final sale of the work).

Marc Chagall The Tribe of Benjamin (From Twelve Maquettes of Stained Glass), 1964 is framed to museum-grade, conservation standards, presented in a complementary moulding and finished with silk-wrapped mats and optical grade Plexiglas.