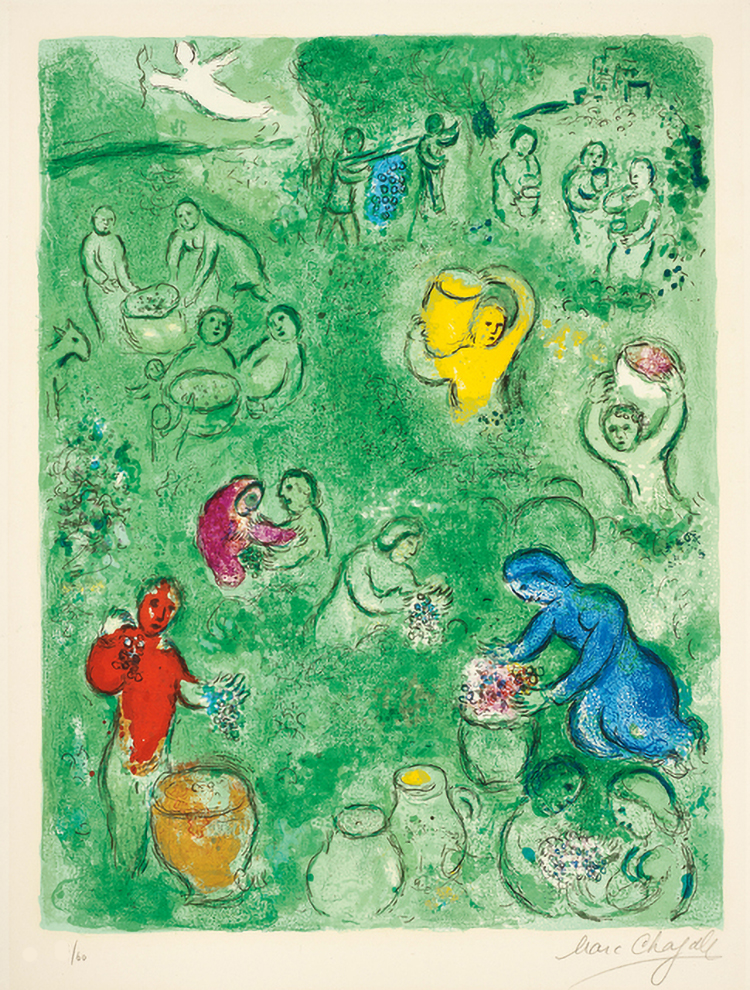 Marc Chagall’s Les Vendanges (The Wine Harvest), from Daphnis et Chloé, 1961 is one of the stunning lithographs within the illustrated Daphne and Chloe series that Fernand Mourlot considered to be one of "the most important graphic works that Marc Chagall has created thus far." Chagall dedicated three years to this project and undertook a series of lithographs that perhaps defined his career, making these pieces "a work of notable importance which, unquestionably, can be placed at the top of the list of illustrated works of our time" (Mourlot 131). Daphnis and Chloe, the two romantic heroes of Greek writer, Longus, are two childhood friends who undergo the trials and tribulations of growing up and, consequently, falling in love. Evoking the rich Mediterranean landscapes from which Chagall personally drew inspiration, this work is a masterpiece any Chagall enthusiast would admire.

Marc Chagall’s Les Vendanges (The Wine Harvest), from Daphnis et Chloé, 1961 visualizes the people of Mitylene preparing for the vintage harvest at the beginning of Book Two in Daphnis et Chloé. Figures in a variety of different positions fill the landscape with the impression of communal productivity. The lack of perspectival depth compounds the movement and bustling energy created by the figures. A verdant green dominates the color palette of the whole scene, alluding to the fertility of the land and the growing physical attraction between Daphnis and Chloe. Marc Chagall’s Les Vendanges (The Wine Harvest), from Daphnis et Chloé, 1961 is one of the few works in the Daphnis et Chloé series that does not feature the two protagonists as the main subject but rather highlights the community of Mitylene as a whole. The lush green color and abundant composition not only evoke the fruitful occasion in Longus’ Greek tale but also attest to Chagall’s interpretation of the rich Mediterranean landscape of Greece.

Created in 1961, Marc Chagall’s Les Vendanges (The Wine Harvest), from Daphnis et Chloé, 1961 is a color lithograph on Arches paper. This work is hand-signed by Marc Chagall (Vitebsk, 1887 - Saint-Paul, 1985) in the lower right margin. Numbered from edition of 60 in the lower left margin.

Marc Chagall’s Les Vendanges (The Wine Harvest), from Daphnis et Chloé, 1961 is fully documented and referenced in the below catalogue raisonnés and texts (copies will be enclosed as added documentation with the invoices that will accompany the sale of the work).